Carbon bubble, it am all de rage. The latest is from Blue and Green Tomorrow. Who say:

Oil giant Royal Dutch Shell has warned that its profits are likely to be affected by international efforts to curb climate change, as campaigners say investors should steer clear of fossil fuel stocks. In its annual and strategic report for 2013, Shell says that increasing concern over climate change will lead to new regulations that will hit the company’s production profitability and delay some of its projects.

Well if even Shell are saying that, it must be true, no? It would be if they were, but they aren’t quite saying that, so it isn’t. This isn’t new; we had it last year and Brian was pushing it, weakly a few weeks ago.

So first off, if this was actually true then “investors” would not need to be listening to the advice of “campaigners” because the investors would know already. But I said that last time, its the bleedin’ obvious, if you didn’t believe me then you won’t now. Lets instead read what Shell have to say. Here’s the report. Its quite big, 50-odd pages, and the mentions of Climate are few; its not a major issue for them. The first occurs in: 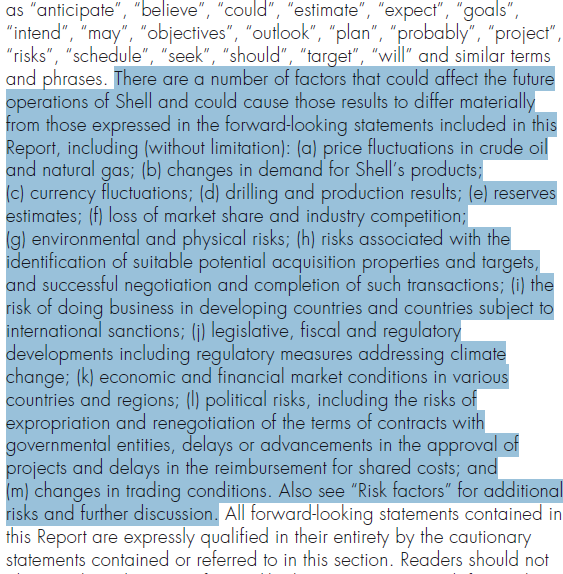 I’d outline the word “climate change” for you but (a) it would be tedious and (b) doubtless having to search it out is instructive. You take the point, I hope: Climate Change is but one of a host of risks that they are legally obliged to list and consider. As yet, there’s no consideration of the seriousness. The first detailed mention is: 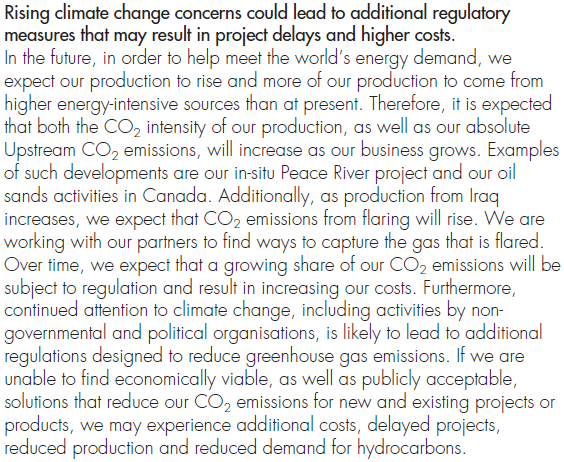 Does this justify the “Shell predicts climate regulation will hit profits” of the headline? No. Its more vague and more nuanced, and doesn’t carry the immeadiate investment timescale. Later on, there’s a whoole page’s worth (p 50 / p 51) but it reads much the same to me. There’s a nod to CCS, with a ~2050 timescale, sourced to IEA.

* He’s a bit late to the party, but Timmy chimes in with much the same, albeit from Exxon.
* Schumpeter: A green light: Companies are starting to open up about their environmental risks. They need to do more, from the Economist.