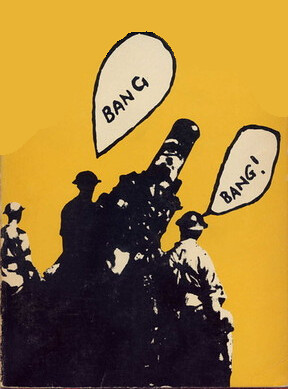 From QJRMS (paywalled), in which the Director & the Chief Computer of the British Rainfall Organization discussed the then-recent wet winter of 1914-5:

The year 1903 saw the general adoption of wireless telegraphy, and an anxious public seized upon this as the cause of the great rainfall of that year. But the fact that 1872 and 1853 were equally wet, if not wetter, without the aid of Hertzien waves, and that no year since 1903 has been nearly so wet in spite of the enormous increase of radio-telegraphy, shows the fallacy of the inference

An explanation which has been most readily accepted by the general public, and has even found favour among a few meteorologists, is that the heavy artillery firing in France and in Flanders is the primary cause of the unusual wetness of the past winter. There are several lines of argument. The crudest is that the water vapour formed by the combustion of cordite or other explosive is sufficient in quantity to affect the rainfall appreciably, but a moment’s consideration of the staggering weight of water in even a moderate shower over a small area disposes of this absurdity. A more reasonable argument is that it is the concussion caused by high explosives which determines the precipitation of rain from supersaturated air. Here again the difficulty arises that if concussion is the cause, precipitation must occur immediately and presumably over the area within sound of the explosions. That at least is the principle on which people who try to induce public bodies to cannonade for rain have always gone. The dryness of September, October, March, and April, however, are difficult to explain on this hypothesis.

The real argument which seems to have weight with the type of mind which must have an immediate cause for any remarkable occurrence is that the rainfall of last winter was unprecedented, that the consumption of explosives in Western Europe was simultaneous and also unprecedented, and that two unprecedented things occurring at the same time must be related as cause and effect. Apart from the disparity of magnitude of the two sets of unprecedented phenomena, the fact that nearly equally wet periods occurred 3 and 38 years ago without any unusual consumption of explosives shows that such an explanation is not necessary to account for phenomena which can occur, and have occurred, in its absence.

It seems to us that the phenomena of long-continued wet spells in parts of the British Isles must be related, not to phenomena of the order of magnitude that comes within the range of human power, but to world-wide relationships, which increase the number or modify the course of the air-currents and atmospheric depressions of the North Atlantic; and it appears more hopeful to look for an explanation to these atmospheric surgings, which appear to give rise to oscillations between the pressure distribution in the northern and southern hemispheres, and which may possibly be associated with extra-terrestrial changes.