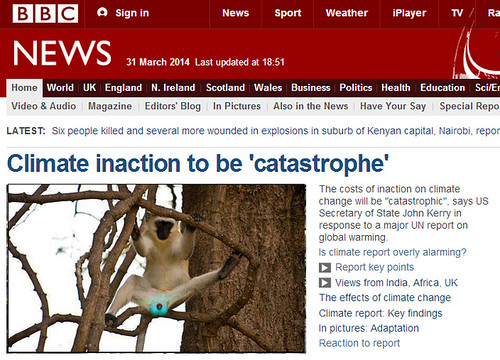 In fact, I have a guilty secret that I will share with you: I faked this screenshot. But only a bit. Here’s the original. My monkey, whilst faked in, is every bit as valid as their monkey. Its from the Rare Animals feed on facebook, which I recommend.

I have another secret I’ll share with you: I haven’t read the report. Not only that, I haven’t really read other people reading the report. But what I was interested in, at least somewhat, was the general tenor of reactions. So the Beeb has Viewpoints: Reactions to UN climate impacts report with reactions by Corinne Le Quere, Connie Hedegaard, EU Commissioner for Climate Action, John Kerry, Nicholas Stern, Prof Sir Andy Haines, London School of Hygiene and Tropical Medicine, Rachel Warren, Tyndall Centre for Climate Change Research at the University of East Anglia, Ed Davey, Energy and Climate Change Secretary, Sir Mark Walport, the Government’s chief scientific adviser, Caroline Flint, Labour’s Shadow Energy and Climate Change Secretary, Al Gore, Prof Sam Fankhauser, contributing author to the UN’s climate report (AR5) and co-director of the Grantham Research Institute on Climate Change and the Environment, Andy Atkins, Friends of the Earth executive director. Can you guess what they thought of the report? Oh go on, have a guess. Yes, you’re right, they loved it, to a man and woman. OK, I shouldn’t take the piss. The interesting point is that there’s not a shred of false balance there: no token denialist was thrown in (one in the eye for you, Victor ;-).

RC has a not-very-interesting but neutral post that just points you to the thing. Sou has some reactions. Phil Plait also posts, but makes the mistake of asserting that Food production rates are already getting lower, with crop yields dropping. They aren’t. See here for example. As http://www.grida.no/publications/rr/food-crisis/page/3562.aspx says:

Perhaps PP means “the contribution of climate change to food production rate is negative”. Who knows? Meanwhile, there is some evidence that Eli has actually read it, credit to him (also credit for his helpful flowchart).

I think its instructive to quote our E&CC Sec in full:

We do have to act. I see the expenditures we’re having to make as an insurance policy, if you like. By paying a small premium now we deal with the risks so we prevent catastrophic climate change.

We have doubled the amount of renewable electricity in the last three years so we are making progress. We have to make an awful lot more. But part of our role is to lead across the world and we’ve got people across the world working with other governments. And I’ve seen signs at the UN climate talks that I go to of change in China and the United States. I think it’s important that Britain continue to work with our European partners because I think there is a chance now that the world can make the deal it has so far failed to do.

There’s an awful lot of things that if we act now and reduce our carbon emissions we can prevent it from getting worse.

(my bold). Notice how he is pushing the “small” premium now idea. Small is, to some extent, in the eye of the beholder. But that does look to me like a don’t-frighten-the-horses sort of quote. As regular readers know, I’d go for a “small” premium now, in the form of a carbon tax of perhaps £40 tonne (don’t hold me to the exact number, I made it up). But instead we have the stupid ETS and not really sensible subsidies to renewables. Lets hope we don’t lead with that across the world.

Well, this isn’t my area of expertise, so I’m open to instruction. Looking at the Graun they headline with “Climate change a threat to security, food and humankind – IPCC report. Warming is leading to more volatile weather patterns that are already reducing crop yields, the IPCC has warned”. And continues The report said climate change had already cut into the global food supply. Global crop yields were beginning to decline – especially for wheat. However, quoting Michael Oppenheimer they say …already climate change is slowing those yields which is somewhat different. Somewhat lower down they belatedly quote from the report itself: Negative impacts of climate change on crop yields have been more common than positive impacts. Which is likely true, but doesn’t mean that crop yields are actually decreasing.

32 thoughts on “Climate inaction to be ‘catastrophe’”