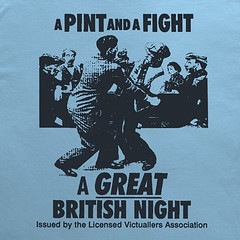 Words carefully chosen, as you’ll discover. The back story: Lennart Bengtsson has a paper rejected by ERL0 because, amongst other failings, the “overall innovation of the manuscript is very low”. In a huff, he joins the GWPF1, which is much trumpeted by the Dork Side. His colleagues point out this is a mistake, and he changes his mind, but blames his colleagues for his error2. LB then leaks a deliberately partial version of his rejection letter to the Times, in order to make it look like he’s being repressed3. Not everyone was terribly impressed4. [Update: see also Lacis.]

Aanyway, it was all good fun and lead to the sort of blogostorm that we haven’t seen in, ooh, months. It was just like the old days. So I thought I’d venture off into the trackless wilds, and visited NoTricksZone5, all-European winner of the “most hyperbolic headline of the affair” competition. NTZ believed everything LB had told them4a, and weren’t very amused when I commented Oh the poor dahling. LB is such a delicate wilting flower. Don’t you think someone who fades so easily ought to have kept out of the limelight? Or, in more vigorous terms, that he ought to stop being such a crybaby and Man Up? Their unamusement was somewhat dull, but it did provoke a post all about me, which was more interesting6. But third time is the charm: an ostensibly unpromising post about some German Meteorologists mumbling into their beer about the evils of the world7 included them saying These developments involve first of all something in the lines of a democratization of science: Everyone is allowed and should have a say in it… in our opinion (and that of others) led to very negative impacts on the quality standards of science which sounded to me like the aged German Met folk being sniffy about “Citizen Science”. Since that’s the kind of stuff NTZ and their ilk thrive on8 their backs were up9; skipping over some invective the conversation returns (at last!) to LB, and I respond by pointing out that he’s been “economical with the truth”10. “Graeme No.3” suggests that I had best rush over to the Bishop where he’s pointing out that it was the reviewer who made the mistake. Nothing much more happens at NTZ (oddly enough, not one of them are interested in discussing the second referee), so its on to stage 2: the Bish.

The Bishop (warning: shameless self-indulgence ahead)

Who wrote the only concern in the reviewer report published to date seems to be with Bengtsson’s temerity in thinking that observations and models really ought to match up, and of course the concern that sceptics might be keen on the paper. The gullible folk at the blog were lapping it up, of course, so I felt obliged to throw in No. There’s a previous, fatal concern: “The overall innovation of the manuscript is very low”. Its curious that you managed to miss that. Perhaps you need to read it more carefully. Unfortunately for them, there’s really not much you can say to argue with this, so they’re down to denial and diversion. The most common response11 was something like “I can assess the overall quality of that review”, or “Review papers by definition aren’t ‘innovative'” – something that just doesn’t address the issue; which is the Bish’s error. Another attempt (we’re on page 2 now) was You changed the topic. The topic was error. There is no way that the judgement “overall innovation of the manuscript is very low” can be understood as a claim about an error. Please stick to the topic. At this point the conversation becomes rather hard to follow, because a number of my comments have been invisibly censored. Here’s one in reply to those last:

Says you. But you’re missing the point; the point is the falsity of our host’s text. Our host asserted that “the only concern in the reviewer report published to date seems to be with Bengtsson’s temerity..”, and yet the reviewer said “The overall innovation of the manuscript is very low”. You may, if you like, assert that the reviewer was wrong to raise the point of originaility – I’d disagree with you – but you may not gloss over the problem that the review *did* raise this point; and thus our host is in error.

> I don’t see why focusing on this point is somehow lying.

*Focussing* on that point is entirely permissible – albeit distinctly one-sided. I’m not complaining about that. I’m pointing out that our host is lying when he says that was the only concern raised (I think one could originally have forgiven him for an honest error committed in haste, but time has now passed and its clear he intends to hope his error gets buried rather than correcting it; that is now lying).

> Please stick to the topic.

Aka “Please do not under any circumstances think for yourself”. Will you, similarly, condemn “Leave Savonarola alone” type comments as off topic? Of course you won’t! They’re by people you regard as on your side, and so they are above criticism.

Seems rather off-topic too. Its also false, but that won’t stop you repeating it.

Some of the censorship is a bit incompetent; the fragment “”but time has now passed and its clear he intends to hope his error gets buried rather than correcting it; that is now lying” exists now only in being quoted by someone else; the original comment is invisibly deleted.

After a while, when its clear that the monekys aren’t doing very well, the organ grinder turns up with “I am not sure if I have ever come across anyone quite so disagreeable”. That’s an open goal (thanks NikfromNYC and ThomasFuller2, and indeed many others), for

> I am not sure if I have ever come across anyone quite so disagreeable.

You must have lead a very sheltered life. Allow me to point you at this gem from NikfromNYC: http://stoat-spam.blogspot.co.uk/2014/05/you-are-fanatically-pure-evil.html

> feels that my failure to mention a criticism made of it on grounds of “lack of originality” means that I have been lying.

No. You need to try reading what people say. I’m saying (sigh. I’ll say it again) that your statement “the only concern in the reviewer report published to date seems to be with Bengtsson’s temerity in thinking that…” is false.

There. Its really that simple. The falsity of your statement doesn’t depend on the contents of the Sekrit manuscript; it isn’t affected by whether the reviewer was right to say it or not; its simply a consequence of the reviewer having said

“The overall innovation of the manuscript is very low” (http://ioppublishing.org/newsDetails/statement-from-iop-publishing-on-story-in-the-times)

Now, I can see why you wouldn’t want to draw attention to that rather embarrassing fact. From your POV, sweeping it under the carpet is very much what you want; and I’d have understood, had you just ignored it. But asserting that it doesn’t exist is false.

> And that my absence from my desk on a Sunday means that I am running from facing the facts.

> I think he “has issues”. Serious issues. But he can explain himself on his own website, where only the fruitcakes go.

Well, I’ve had comments from NikfromNYC on my blog, so I can’t completely disagree with you about fruitcakes.

So, there you have it (or rather you don’t, any more, because it got vanished). Just one of the Bish’s people (I record my gratitude to Jonas N) stood up against censorship. But more than that, I was disappointed by their ability to think, to read, to argue. By their simple denial of what was in from of their eyes. By their total lack of skepticism about what they were being fed. NTZ isn’t any better, of course, but somehow I’d expected some kind of superior quality “skepticism” from the Bish; and all I got was std.denial.

0. Well, there’s never a beginning I suppose. LB’s friends wouldn’t want anyone to look at the rather regettable things he said earlier in Swedish, hoping that the wider world wouldn’t read them.

1. I admit, the causality proposed here is speculative.

2. I doubt he’d agree with me, but that’s my reading. You can read his “it’s all someone’s else’s fault” statement if you like.

4. And other links far too numerous to mention. 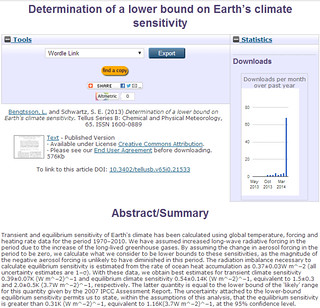 4a. These “sup” things are great, I must over-use them more often. But they’re a pain when they get out of order. So: LB becoming a hero of the nutters is a bit weird, given stuff like Determination of a lower bound on Earth’s climate sensitivity which none of them would touch with a bargepole. Incidentally, the graph of downloads per month is amusing, no?

5. Motto: Not here to worship what is known, but to demonstrate our inability to spell.

6. To me, not you. It gets briefly exciting when they deny that LB received the emails that he said he received, but that was just too wacko to pursue.

7. Tell me I’m wrong, Victor. Its not as if I read the whole thing.

8. The “Dumb America” fallacy. See-also me on Citizen Science.

9. Weeell, really, anything I say puts their backs up, they really are very sensitive creatures. “Gareth” does make a perfectly reasonable response, and in a better environment I’d have continued the conversation with him.

10. One of those useful phrases like “terminological inexactitude” (i.e., “lie”) that can be uttered in polite company without seeming too rude. As wiki notes, it is “popularly used as a euphemism for deceitful, whether by volunteering false information (i.e., lying) or by deliberately holding back relevant facts”.

11 Actually the most common response was an ad-hom of the intellectual level of Sorry Connolley but your not in your realm surrounded by sock-puppets any-more, but putting those aside.

* Popcorn of a different sort is also available from Bonny Prince Charlie.
* Adventures on the Hill by ATTP

53 thoughts on “Adventures in the denialosphere”