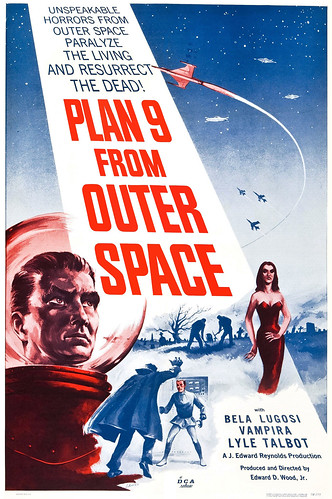 Also known as the worst movie ever made. What I’m going to discuss doesn’t come even close to “the worst blog post ever made”, but, well, you’ll see.

So: the backstory. I’ve been commenting on some of JoNova’s stuff. Its not the big time, but unlike WUWT, or BishopHill, or a variety of minor blogs, she doesn’t censor my posts. There’s some jolly back-n-forth (e.g. at Green climate pornography — cheer for the deaths of the heretics!); she, like-but-not-to-the-same-degree-as AW, really dislikes the “denialist” word; in her case this is a bit odd as I don’t appear to have called her such. But ultimately it goes nowhere, and I won’t trouble you with the details.

But! Life has got more exciting because they have at last done what everyone has been telling the “skeptics” to do for so long: propose your own coherent theory then. And so (starting with 1, but now we’re up to 5 and that’s not the lot) we have BIG NEWS: Historic development — New Solar climate model coming. Aand: as you’d expect, its not really a coherent theory, its just a “theory”. But don’t take my word for it, instead you should read Monkers:

David Evans’ ground-breaking work is a devastating new approach to the climate question. I have been lucky enough to observe the development of this project, and am full of admiration for both Jo and David for their dedication to carrying out a breathtaking research project with no financial reward, simply because it so desperately needed to be done. Let this be the last nail in the coffin of climate extremism. I hope that, as a result of this work, David will be properly recognized by the Australian Government, which – unlike its unlamented predecessor – is open to the possibility that influences other than Man are the principal drivers of the climate. David’s work is heroic in its scale, formidable in its ingenuity, and – as far as a mere layman can judge – very likely to be broadly correct. One should not minimize the courage of David and Jo in persisting unrewarded for so long in what was and is a genuine search for the truth, starting not from any preconception but from that curiosity that is the mainspring of all true science. I wish this project well and congratulate its justifiably proud parents on its birth.

The full “theory” isn’t yet available, its being dribbled out to maintain a sense of excitement, but that doesn’t stop the acolytes desperately praising it, whilst simultaneously admitting that they don’t understand it. But they’re sure its brilliant, anyway.

So, wassitallaboutthen? If you pick some temperature record (I’m not sure they were terribly precise about exactly which; and I think that is going to matter, later) and Fourier transform it, you get a sloped spectrum that doesn’t look too different from red noise (so a published one, see e.g. fig 5a from Stocker ’96 perhaps? We’re looking at yearly-to-1000-year time scales; probably there are better available, do let me know). Their version of this is fig 4 of part 2. Notice there is no power at annual scales, because they’re using filtered data. And I wouldn’t be surprised if the proxies they are (mostly) using mean they don’t see an ENSO signal; and probably filter out much of any solar signal too. But anyway, the point is, if you decide that solar variation is Really Important and you Fourier transport the solar signal, there’s a big peak at 11 years which (surprise!) isn’t in the obs spectrum1. And if you’re incautious enough to difference the two spectra to produce a transfer function, you deduce “aha! There is a notch filter in the Earth’s climate that somehow removes a pile of variability in a band around 11 years”. Yes really.

Saying that this stuff doesn’t work gets you very few points, of course, because 99.9% of all theories that originate on blogs are wrong if they’re lucky, and not even wrong if not. You need to say why. I think the answer is that diffing the spectra to produce the xfer function isn’t permissible, probably for a whole variety of reasons, but most importantly because the data they are using isn’t good enough for that level of detail.

However, they take their xfer function seriously, so they need to find an explanation for it. Roll on BIG NEWS part IV: A huge leap understanding the mysterious 11 year solar delay. These people are not shy about their headlines (yes, I have pointed them to the terrible example of AW’s paper but it just bounced off. I’m not sure how they’re going to cope when this all falls apart. Will they quietly forget it, like AW and his paper? Will it become part of their background mythology? But I digress). Although its putatively a “physical mechanism” its an unknown physical mechanism, so its called “force X” (from Outer Space). For some odd reason, its 11 years delayed, or something, please don’t accuse me of reading all the details, and “Force X has ten to twenty times more influence on temperatures on Earth than changes in the direct heating effect of TSI (a result we will show later)”. Um, that was a surprise. I was expecting “force X” to have about the same, but opposite, amplitude; therefore cancelling out the solar forcing. Something that had 20 times the amplitude, but an 11 year cycle, would produce an obvious and visible effect. At this point, either what they are saying, or my own poor understanding, is clearly lacking; so I’ll leave you to read their stuff and make up your own minds.

Oh, and there’s also the Brilliant Discovery of the “optimal Fourier transform” which isn’t important for the issues in question; but I’m sure anyone reasonably familiar with the misc Fourier transform algorithms available could point out the Prior Art that they’ve missed.

For extra lulz, it turns out the Lubos shredded it, JoNova was sad, Lubos took the post down, but JoNova has a copy of which I have a cite. I haven’t had time to read it yet, sadly.

Re-reading this in Jan 2015, I see that my main analysis of their failure isn’t very clear at all. So, to take from me in the comments (and TP in #7),

To simplify: DE has found that the spectrum of the global temperature signal (T) is consistent with simple red noise, when viewed broadly, over the timescales he is looking at; and this should be no surprise (but it is to him). He’s also found that the solar forcing spectrum (S) is also red noise, apart from the peak at 11 years. For reasons that are unclear, he has decided that S is forcing T (even though at other points he denies this assumption is built in, but it is), and therefore that the difference between the spectra represents the xfer function, and hence a notch filter. But another possibility that S isn’t forcing T in any significant way. DE’s “force X” seems to me somewhat like the luminiferous aether – it only needs to exist if you try to impose your view on reality.

1. You don’t see the the 11-ish solar cycle in the global surface temperature record. You can see it in other stuff, generally upper atmosphere (e.g. Harry van Loon and Dennis J. Shea, GRL 2012) although the folk at JoNova don’t know that (and, ter be ‘onest, I was never terribly keen on it when I was in the game). I always assumed you didn’t see it because it was so small, and got integrated out by the ocean a-la Hasselman.

* JoNova’s “Big News” skeptical climate “model” is one giant circle – Daily Kos
* JoNova’s emails to Lubos begging him to return to the fold
* JoNova: Climate Rage: We absolutely cannot have… a rational conversation!