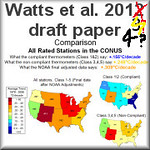 A year ago, the entirety of the intertubes were rocked to their foundations by a post of epochal proportions – me taking the piss out of AW’s “paper”. And now, I’m rather distressed to see, the anniversary of this anniversary has passed unnoticed by everyone. When your major “paper” is so contemptible that people don’t even remember to mock it on time, you’ll probably be reduced to publishing cartoons. Oh, wait.