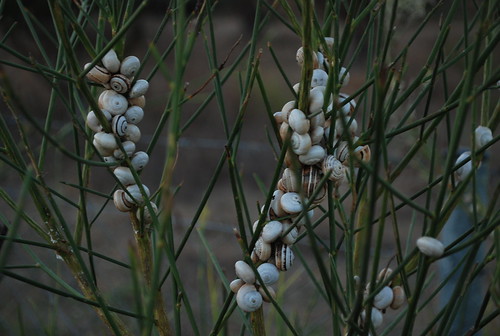 Did I ever tell you how exciting snails are? No, wait, don’t go away… Oh well. Now the rest of you have settled down, I’ll continue. My pic, incidentally, shows some Sphacterian snails I met in Greece this summer, which exhibited this odd clustering behaviour I’ve not seen before. But that’s nothing to do with this post.

I was reading the Times, as one does in Waitrose cafe when one can’t find the Torygraph, and came across an interesting article which is paywalled, so in revenge I won’t point you at it. Extinct snail re-discovered at Aldabra Atoll will do instead, and its rather more neutral, which is nice (re-reading: neutral? Maybe, but there’s definitely drivel in there, such as SIF CEO Dr Frauke Fleischer-Dogley said of the re-discovery, “Despite major global environmental threats like climate change, this discovery shows that investments into protecting unique island biodiversity are well-placed”. The substance is:

The Aldabra banded snail (Rhachistia aldabrae), declared extinct in 2007, has been re-discovered alive and well at the UNESCO World Heritage Site of Aldabra Atoll, Seychelles. Before the discovery, the last living individual of the species, which only occurs on Aldabra, was recorded in 1997. Subsequent searches yielded only shell remains. The snail’s apparent demise was linked to declining rainfall on Aldabra and was widely publicised internationally as one of the first casualties of climate change impacts.

I’m a little dubious about The snail’s apparent demise was linked to declining rainfall on Aldabra and was widely publicised internationally cos I remember none of it, but it may be true[*]. It made Biol. Lett. 2007 Short-term climate change and the extinction of the snail Rhachistia aldabrae (Gastropoda: Pulmonata) as published by the Royal Society.

[*] Actually, lets examine this a bit more. Forbes (link below) who are no friends to GW say A 2012 article by Abigail Cahill and Matthew Aiello-Lammens and colleagues in Procedings of the Royal Society B cited it as one of just a handful of cases where climate change is thought to be the immediate cause of extinction.The UN’s Intergovernmental Panel on Climate Change referred to the Cahill study… which I interpret as trying to show how widely used this example was. But note that the IPCC (WG II) didn’t actually refer to the Gerlach paper at all; only to the Cahill overview (for some reason the IPCC call it Cahill 2013, even though it looks to be 2012; odd [But see comment #4]). And what the IPCC has to say from Cahill is quite nuanced:

At the opposite end of the spectrum, species extinctions are very difficult to attribute to climate change (Section 4.3.2.5), in part because other factors dominate recent extinctions. This does not mean that climate has not played an important contributing role; indeed it has been argued that the low level of confidence in attribution is due to the lack of studies looking for climate signals in extinctions (Cahill et al. 2013)

As you’d expect, the obvious suspects made the obvious hay over this. And the Light Side largely ignored it. But should we? As well as a chance to show “balance” this is also a chance to ride one of my once-favourite hobbyhorses, so I’ll take the chance. And the equine is: if you want to know if global warming is occurring, look at the temperature record over a climatologically meaning period. Or, something tied very strongly to it, like sea level or ocean heat content. Other stuff – weather extremes, and in particular extinctions, aren’t good markers because they’re inherently statistically less stable (and for extinctions in most places you have to worry about habitat loss as a cause, too; that’s usually anthro as well, of course, but its not GW). Promoting them to gee up the troops because they’re sexier and more exciting than just-a-few-degrees-warming isn’t a good idea. I really have said this kind of thing before; I’m not making it up. Mind you, it wasn’t popular with the folks then; I doubt it will be now.

Continuing, it seems – in retrospect, though I defend myself from failing to think this at the time on the grounds that I paid no attention at the time – fairly obvious that trying to work out if this particular snail was extinct or not was pretty tricky, of itself. Because, as Clive Hambler says The vast majority of the habitat is virtually inaccessible and has never been visited. It is unwise to declare this species extinct after a gap in known records of ten years. We predict rediscovery when resources permit (warning! Link is to ideologically offensive site, “Forbes”). And just for good measure there’s the usual rather regrettable problem of a journal refusing to publish corrections.

This is a good place to link to Eli’s “words” on the views of government.

* Retraction Watch: At a snail’s pace: Species rediscovered, but paper on its disappearance remains.
* Strangest thing you can see in Ulm

12 thoughts on “Did I ever tell you how exciting snails are?”