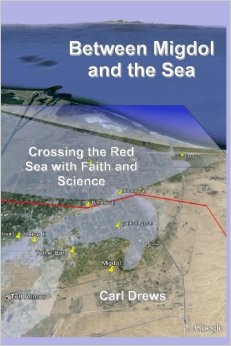 Between Migdol and the Sea is the book, by Carl Drews, of the paper Dynamics of Wind Setdown at Suez and the Eastern Nile Delta, by Carl Drews and Weiqing Han. Just so you don’t get confused, its subtitled “Crossing the Red Sea with Faith and Science”. Those with long memories will recall the Great Fuss and Part II four years ago when the paper was first published. Since I was nice then, Carl asked if I’d like a copy of the book, and I said yes.

[Update: the original comments to PZ’s posts were lost; now they are found, and part 2. Re-reading the comments at P, I’m again struck by the similarity between PZ’s commentators and WUWT’s.]

Having read the book, and re-read what I wrote then, and a number of comments by other people, I don’t find anything I’d want to unsay; and about the science, nothing more I need say. I feel a bit guilty for calling it a harmless minor piece of hydrodynamics (Carl asks if he could perhaps be promoted to “mostly harmless”). How one approaches a subject affects the language one uses: I came to this from the PZM side, not agreeing with him, but trying to find some compromise with him (which didn’t work, but never mind). So my language towards Carl wasn’t so conciliatory. We get one minor extra data point from a four year’s perspective, which is who has chosen to cite it. The answer (if we ignore one from ICR) is a couple of times, but only as an example of the sort of simulations ROMS can do. So, not great, and clearly it hasn’t started a new field. But almost nothing does, so that’s hardly a complaint. The best defence of the paper remains what it was before: academic freedom, the value of curiosity-driven research, and playfulness.

The paper is the center of the book, but there’s rather more. Perhaps the core is in the subtitle “Crossing the Red Sea with Faith and Science”; that’s what he really wants to establish. And before we re-open all the old arguments: no, this still doesn’t affect the value of the paper, considered in isolation. To convince you of his thesis, he needs to do a couple of things: 1, that it could have physically happened; 2, that it kinda fits, in terms of the mechanisms of getting people across; 3, that it works historically. There’s also an interesting survey of other people’s proposed places where the crossing might have occurred, and such.

For 1, we have the paper. To do 2, there’s a couple of chapters of “story”: a re-telling as he imagines it. Fair enough, and readable. There’s also a need to re-work the numbers given in Exodus for the numbers who crossed, and so on – there’s a lot of detail that I won’t attempt to summarise. For 3, well, this isn’t my subject but I’m inclined to believe the std version: as the Not So Good Book says:

Other attempts to date the Exodus to a specific century have been equally inconclusive.[46] Details in the story in fact hint that a complex and multilayered editing process has been at work: the Exodus cities of Pithom and Rameses, for example, were not inhabited during most of the New Kingdom period, and the forty years of wilderness wanderings are also full of inconsistencies and anachronisms.[47] It is therefore best to treat the Exodus story not as the record of a single historical event but as a “powerful collective memory of the Egyptian occupation of Canaan and the enslavement of its population” during the 13th and 12th centuries (Ann Killebrew (2005), p. 151).

Doubtless you have your own opinion. Carl has several chapters addressing this and trying to demonstrate the historical reality of the Exodus.

Type A and type B

And Moses stretched out his hand over the sea; and the Lord caused the sea to go back by a strong east wind all that night, and made the sea dry land, and the waters were divided.

This is interesting, to me, because had you asked me I’d have said “well the Bible says that God parted the waters”. Or somesuch. But it says no such thing: it says fairly clearly that God caused a wind, and the wind moved the sea. Who cares about such distinctions? Well, I do: because its interesting when a piece of text you thought you knew turns out not to say quite what you thought it did, when you read it closely.

The second interest is not one for me, since I’m a good atheist: the distinction between miracles that are clear suspensions of the laws of physics, and miracles that are merely massively improbable; that are essentially only miracles because of the coincidence of timing. Carl wishes to establish the crossing of the Red (really Reed) Sea as one of the latter type. To me, its a weird distinction: if I were an all-powerful God, why would I ever bother with the second sort? Causing a wind to occur at just the right time would be “as hard” as just pushing the water aside directly (I put “as hard” in quotes because it doesn’t mean anything, physically; both are suspensions of the laws of physics, only one of them is indirect). But I’m an atheist, not an all-powerful god.

There’s also some examination of words. Does “the waters were a wall unto them on their right hand, and on their left” mean as with Charlton Heston, with a physical “wall of water”? Or does it mean “wall” in the sense of protective barrier? Depending on how you view things, this is either an interesting exercise in trying to understand the language, now, as written thousands of years ago; or weaselling. I’m happy to go with the former.

I feel I ought to have one, but I haven’t. Oh, but what about conclusion of the article Jerry A. Coyne aka Why Evolution Is True wrote? He really really didn’t like the paper, in much the same way as PZM. JAC boldly predicted But I predict that… will open the floodgates for a whole host of Jebus-scientists to publish “technically sound” defenses of the Bible. So, he was wrong. Ha. Snappy enough?

* Could Wind Have Parted the Red Sea?

There’s a philosophical debate to be had over the meaning of the word scientist, or even the origins of the term, and indeed “what is science?”. But that swiftly becomes tedious, so instead take the Viz test: Do your bitches turn tricks on the street or do they smoke cigarettes chained up in laboratory?

People often say that GW is slow and hard to see. One place you can see it is in the mountains. I don’t have many pix that show it well, but here’s one pair. We’re looking at the Sulzenauferner. The first is from 2014, and is taken from the path up to the Beiljoch (which said col is visible in the lower pair of pix) between the Sulzenauhutte and the Dresdener. The Zuckerhutl is straight on, buried in cloud, how unusual. 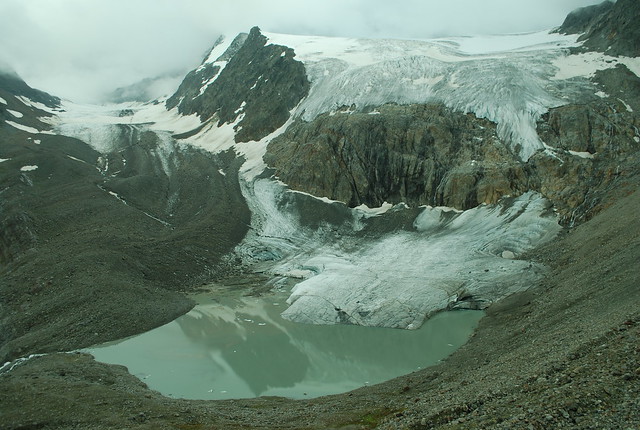 And here’s the same thing back in 2001, though taken from a slightly different and higher viewpoint, somewhere around the Trogler. The triangular buttress almost dead center, above, has only its right hand side visible. 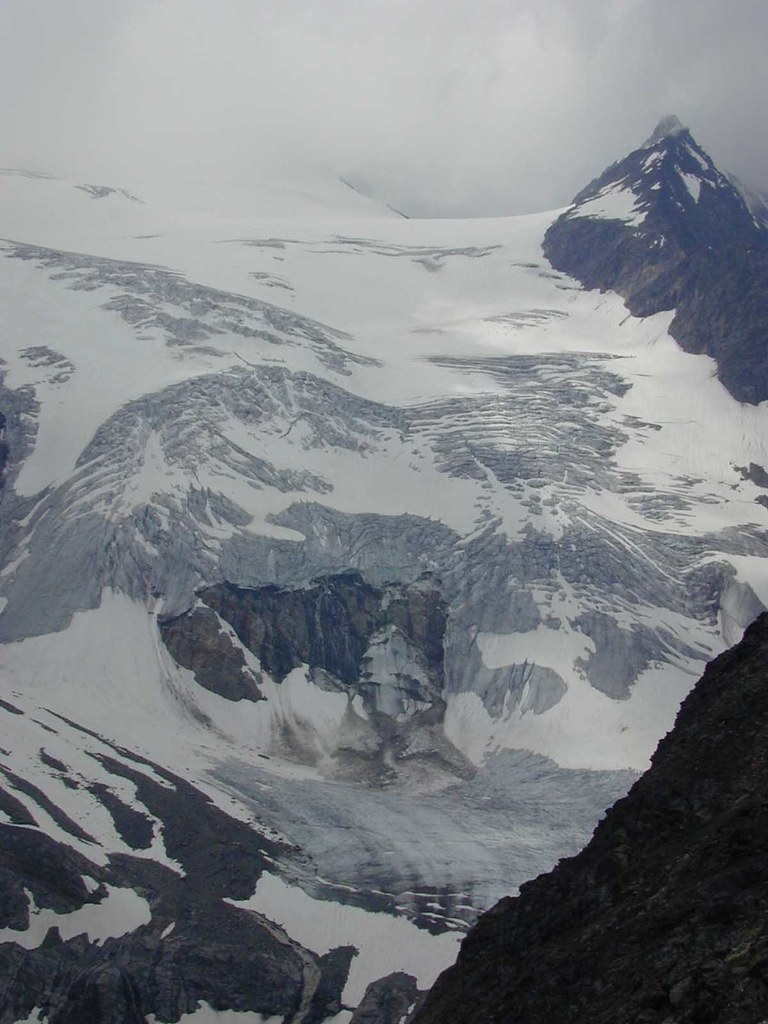 Unfortunately back in 2001 I took no great pains to make a pic I could compare against later. My map, which dates originally from 1970 but had the ice revised in 1995, shows the area as one continuous glacier with no rock. 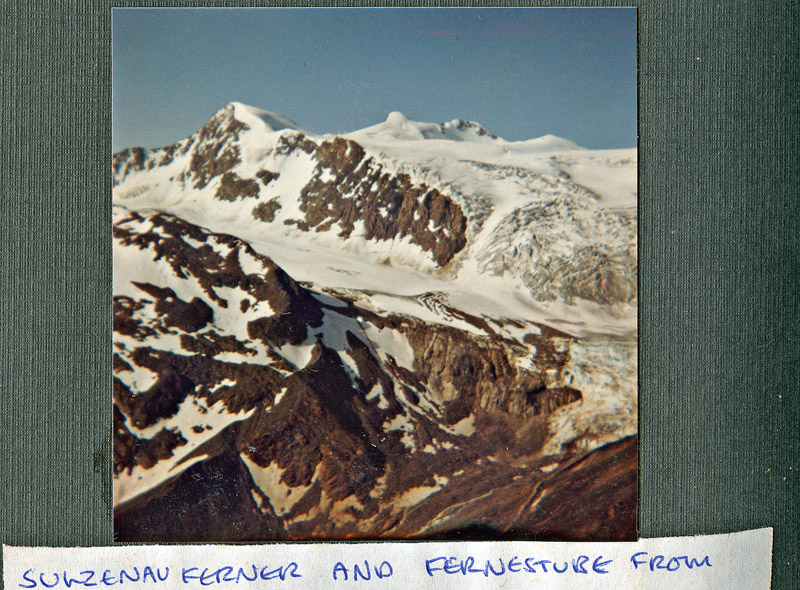 Here’s another view of the same, taken looking the other way from about the moraine on the far left edge of the top pic; the lack of snow in the first pic of the pair makes the difference even starker. Again, top is 2014. 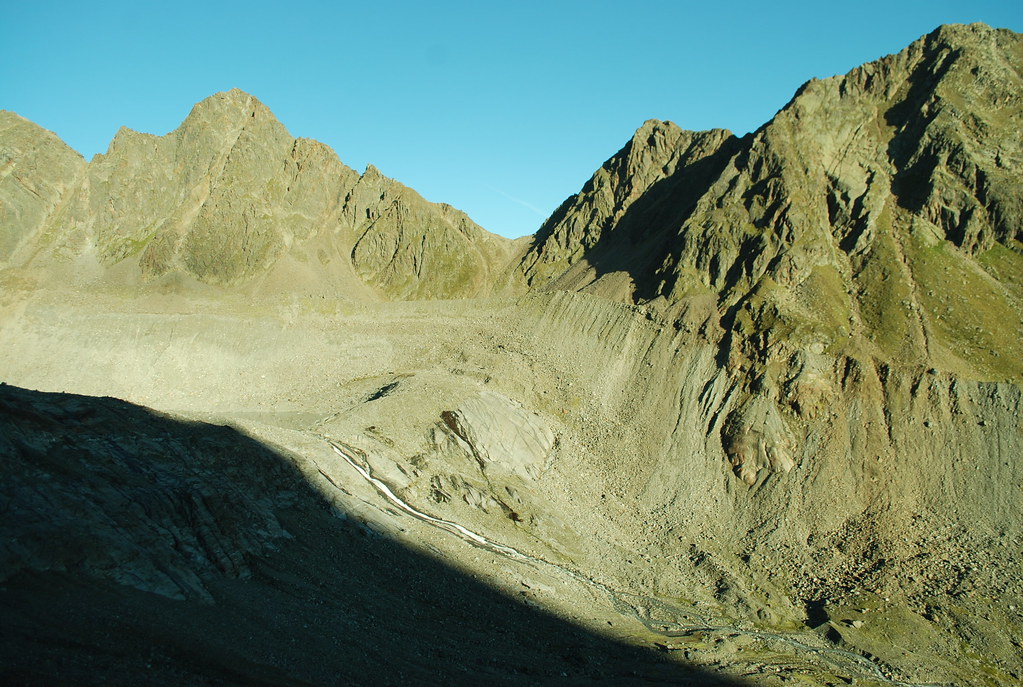 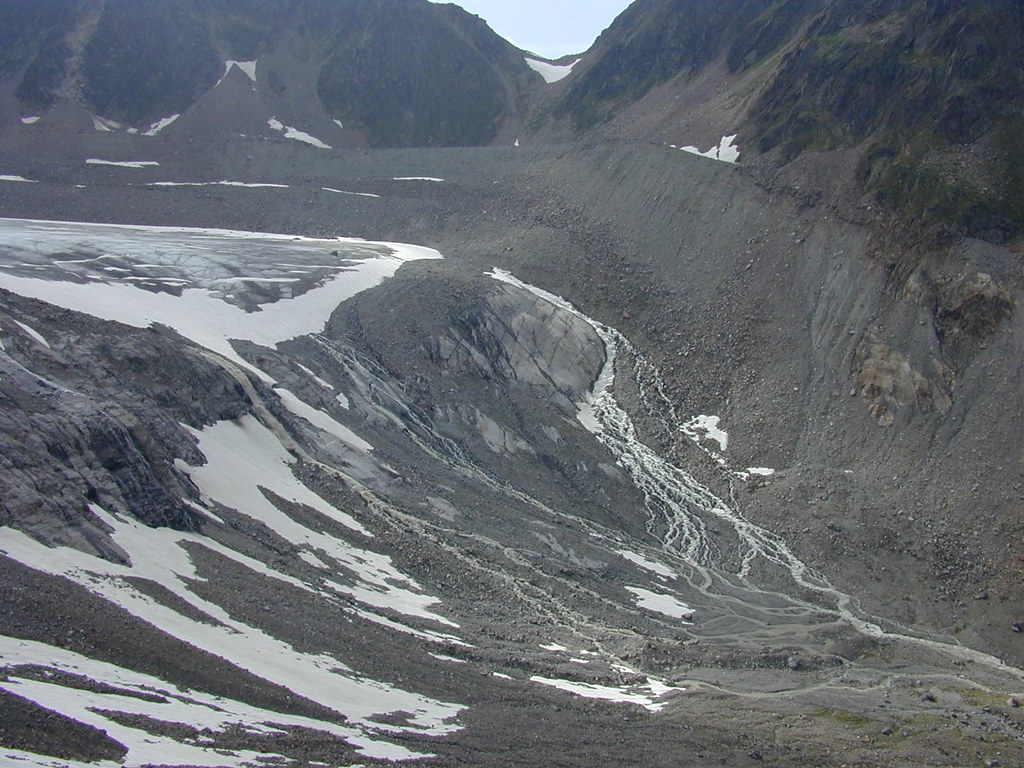 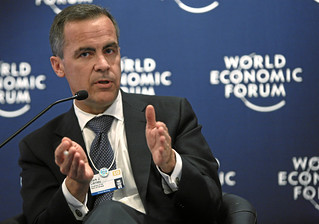 Or so energylivenews says (thanks to J). Their text is:

Governor of the Bank of England Mark Carney appears to agree most fossil fuels can’t be used if the world is to avoid climate change. At a World Bank event on Friday, he is quoted as saying: “The vast majority of reserves are unburnable.” This is a reference to the idea of a so-called carbon bubble – when investors in oil, gas or coal suppliers lose out on money because the reserves can’t be used.

I’ve bolded his words, the rest is editorial interpolation. I find this particularly irritating. If I’m reading about what Carney thinks, I want to read his words, not what someone else thinks about his words. I’m prepared to read analysis of his words, but it has to be primarily based upon what he said. Searching, I can find a bit more in the Graun:

The governor of the Bank of England has reiterated his warning that fossil fuel companies cannot burn all of their reserves if the world is to avoid catastrophic climate change, and called for investors to consider the long-term impacts of their decisions. According to reports, Carney told a World Bank seminar on integrated reporting on Friday that the “vast majority of reserves are unburnable” if global temperature rises are to be limited to below 2C. Carney is the latest high profile figure to lend his weight to the “carbon bubble” theory, which warns that fossil fuel assets, such as coal, oil and gas, could be significantly devalued if a global deal to tackle climate change is reached.

Here again we’ve got the same very brief quote surrounded by acres of unreliable interpolation. Did Carney actually warn about “catastrophic climate change”? In those words? We don’t know. Perhaps, as the text from the Graun above suggests, he only qualified his words with “if global temperature rises are to be limited to below 2C”, which is a very different matter. Indeed, what did he mean by “reserves” or “fossil fuel companies”? If he’s merely saying that we can’t burn all the coal without going over 2 oC then meh: that’s just the bleedin’ obvious, though the fact that he choose to say the bleedin’ obvious might be interesting. Nor is the meaning of “vast majority” obvious. If by “vast majority” he means, say, 90% then I think I’d find that surprising and non-obvious. But I’m not really up with burnable-resources proportions, please feel free to inform me. The Graun links to emergingmarkets.org but that, too, has the same tantalisingly brief quote about my topic. There’s a bit more quote:

The value of integrated reporting, he argued, was to help investors think about “not just things that can be managed in the short term” but also “costs companies are likely to be exposed to as policy responds to challenges” like climate change. He referred to a “tragedy of horizons” – the market failure by which actors including some investors, companies and governments are not looking far enough ahead to coming problems like the environment, even though these are known to them.

and here’s he’s on a reasonable topic for an econ-bod, possible market failures by not looking ahead far enough. Whether he’s right about that I don’t know; what I actually wanted to know was what he’d said about GW, since that was the headline.

The forum referred to is, I believe, How Integrated Reporting Facilitates Transparency and Financial Stability; October 10, 2014; Washington DC. But they don’t seem to have published any text. Anyone know where to find what he actually said?