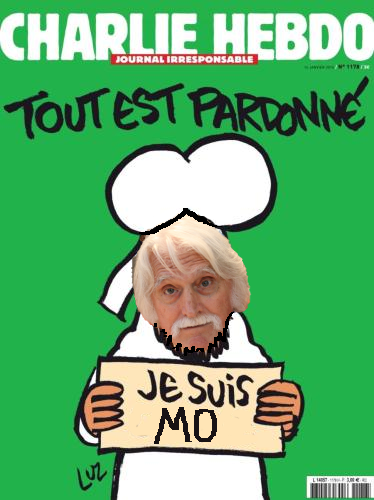 Its been a bit quiet around here. Don’t fear: a whole variety of things have wound me up recently, not least my colleagues inability to use perforce competently1. But none of them quite rose to the level of bothering to post. I was going to write something gratuitously offensive about the Charlie Hebdo stuff, but it seems like everyone is appropriating it to their own cause, so I won’t. Though I did think that it was wittily transgressive, in a post ostensibly defending free speech, to snip comments purely because they offended the diva.

But this post is about How much is climate change going to cost us? by David Roberts, which appeared on my FB feed. Or rather, its about Temperature impacts on economic growth warrant stringent mitigation policy3 by Moore and Diaz, Nature Climate Change (2015) doi:10.1038/nclimate2481. This is, perhaps somewhat contrary to my initial impressions and prejudices (and my irritation with parts of DR’s write-up), quite a decent paper (caveat: IANAE). Unlike the press release which is, as you’d expect, appallingly un-nuanced, saying “We estimate that the social cost of carbon is not $37 per ton, as previously estimated, but $220 per ton,” said study coauthor Frances Moore. Its perfectly clear from the paper itself that uncertainties prevent any statement this definite. That paper, itself, is heavily reliant on Temperature Shocks and Economic Growth: Evidence from the Last Half Century by Dell, Jones and Olken (Moore and Diaz, in the academically approved fashion, lard their paper with many references; but the vital numbers come from Dell et al.). This last paper (we’re at the bottom of the stack now, fear not) contains lots of words and many numbers; naturally, I only skimmed it. But figure 2 is very interesting: 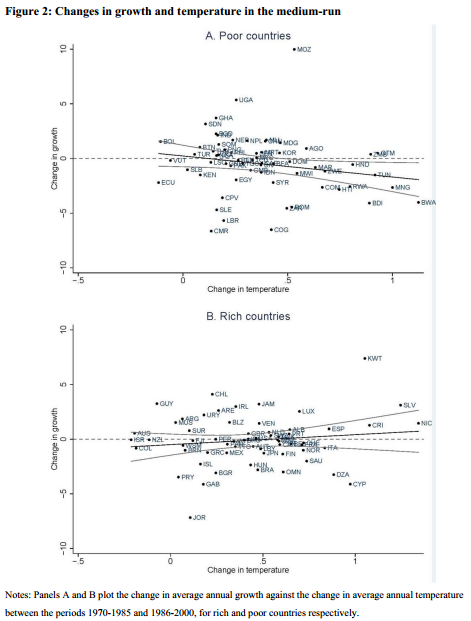 our estimates show large, negative effects of higher temperatures on growth, but only in poor countries. In poorer countries, we estimate that a 1◦ C rise in temperature in a given year reduced economic growth in that year by about 1.3 percentage points. In rich countries, changes in temperature do not have a robust, discernable effect on growth.

There’s also a strong relation between GDP and absolute temperature, which we’re all fairly familiar with. There’s an uncertainty of how to interpret that, for the future: does being rich make you more resistant to temperature “shocks”? M+D call that the “resilience mechanism”. I’d say yes. Or do we expect GW to push more countries into the poor-because-hot basket? M+D: “temperature mechanism”. I’d guess no. I’d also guess that temperature “shocks” are easiest to see in agriculture, and the richer you are the smaller a fraction of your wealth comes from ag.

Moore+Diaz put Dell’s numbers into a version of DICE (ah, I’ve glossed over the whole point there, haven’t I? Read Roberts if you like; the idea is to put effects that reduce growth rates into DICE-a-likes, rather than simple damage numbers), and discover that it makes bugger all difference to the rich world2, but reduces the poor world’s growth by 40% by 2100, based on some scenario or another.

Given that the rich world is massively richer than the poor world, I think that the wealth-weighted reaction to all that would be negligible, though I don’t have any numbers to demonstrate it.

Moore+Diaz consider the different effects that occur if you believe the “temperature mechanism” or the “resilience mechanism”. Unsurprisingly, it makes a huge difference. Browsing their figure 3, in 2080 its the difference between a social cost of carbon (SCC) of ~$1000 per ton, or a number too small to distinguish from zero on their scale.

Before ending, there’s one more picture I’ll show you from Moore+Diaz, because I don’t understand it:

This shows the effects, on emissions optimised “to maximise global discounted social welfare” (DICE-2R (red) is std DICE, I think; gro-DICE (blue) is their fudged version). As far as I can tell, they don’t explain what that is. I understand that their version is going to increase carbon costs, so blue lower than red for emissions makes sense. But given the (fairly low, in the std case) damage from warming, I don’t understand why emissions drop so much for std-DICE. Perhaps there are some assumptions in there that I don’t understand.

Anyway, there you go. Interesting stuff. Hopefully someone with more patience will read the papers more carefully and point out the bits I’ve missed.

1. Well, really, its more a fundamental understanding of version control than perforce; how changes propagate, why integrate -f is generally a bad idea, why being profligate with reverts is likewise unhelpful and doomed to cause pain.

2. There’s a small piece of dishonesty in M+D that the referees should have picked up: they’ve used a small negative value from Dell: as M+D say “smaller effects in rich countries”. But Dell really find no discernable effect at all; the correct value to use, based on that, for rich countries, is zero. Worse than that, if you look at the figure I’ve inlined, the effect is actually positive for rich countries. Quite how M+D turned that into a small negative I don’t know.

3. My access via DR to that paper in Nature comes with a “referrer_access_token”, so I think this is the all-new Nature sharing mechanism that JA was so scathing of. However, its worked for me, here.

* Enchanted Necromancer Brings Life Back To Once-Dead Argument – thanks Hank
* I Am Not Making This Up; Venezuela Bans Queues To Beat Product Shortages – Timmy in Forbes, demonstrating that its possibly to totally fuck up your economy without GW.
* More FB feed stuff: I may take this one on next: That Was Easy: In Just 60 Years, Neoliberal Capitalism Has Nearly Broken Planet Earth, featuring Transgressing a boundary increases the risk that…

26 thoughts on “How much is climate change going to cost us?”