September the 11th. After yesterday (was it really only yesterday? I am slow at writing this down) when I failed and we then went across to the Franz Senn I have another chance at the Ruderhofspitze. My exact route is somewhat unplanned – clearly I’m going upvalley, up the Alpeinerferner and then turning E after the icefall, and hoping to pick up the SW ridge somehow. Now I’ve bought “Stubaier Alpen” by Walter Klier I retrospectively know I did “Sudwestgrat von der Holltalscharte”, route 2293. As usual, there’s a GPS track.

Up at 6:25, which no longer feels early, in time for first breakfast. Wx is so-so, and that combined with a feeling boosted by yesterday’s fail that I won’t really get up the R, leaves me in no great hurry. I set off at 7:45 with a daysac, 2 ski sticks, a climbing axe, crampons and no waterproof trousers. And, as usual, no food for the day. 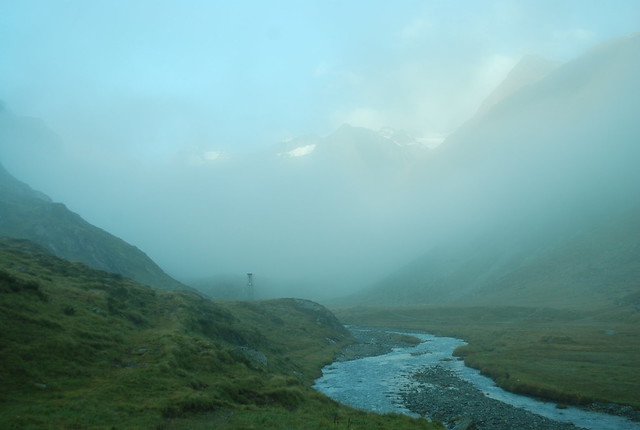 It was like that – could go either way. As it happened, it went to sun, which was great. I saw no-one ahead of me, and steamed up the path nicely, but with appreciation – its lovely, and I’ve been this way before. Past the waterfall to the glacier snout at 2560 after 1:30. 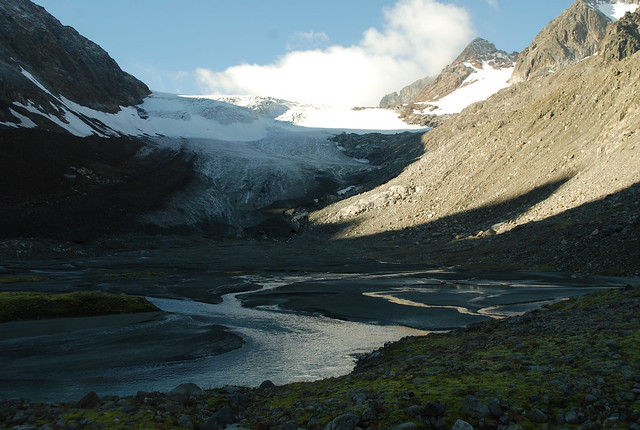 There’s a choice of paths from here. They tend to path-mark you off to the moraine on the right, but its more beautiful to go onto the river bed and then up the snout; crampons on. The roughish stuff on the skyline is the icefall, 3000 m at the top, and the track goes to the right (W). Its strongly foreshortened in this pic. 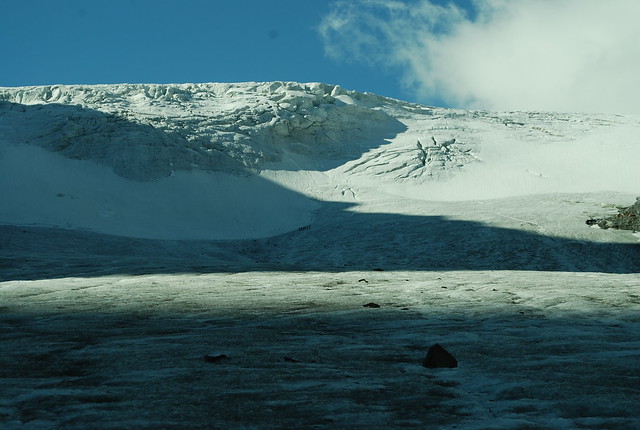 This is the dry portion of the glacier. Above it the not-terribly-dramatic icefall; for scale, there are 6 climbers in the dead centre of the pic, in the shadow, on the edge of snow and ice. I’m catching them up, but then (spoil sports) they stop. It looks like they’re playing in crevasses; probably on a course: 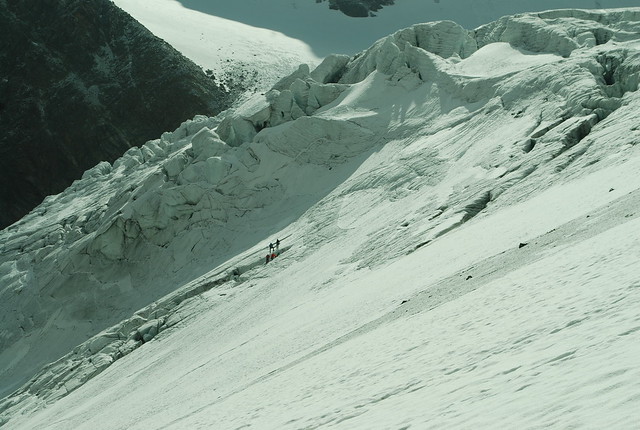 2900 m, 2:30, resting on some rocks nearly at the top of the icefall. After that its a long way over the gently sloped upper glacier, following some old tracks. 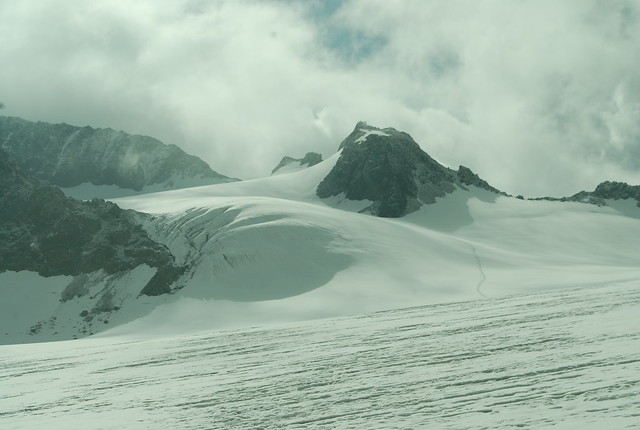 I feel as usual about the tracks: they are very reassuring – I’m not totally mad, and someone might find me – but it takes the edge off the adventure somewhat. The view here is quite hard to interpret: centre is the second, smaller, icefall. The ridge disappearing off L is the W ridge of the Ruderhofspitze, although as far as I can tell its not, oddly enough, a recommended route. The peak in the centre is the unnamed pt 3260; the skyline ridge to the L is the SW ridge of the Ruderhofspitze; in between them is the upper snow basin. 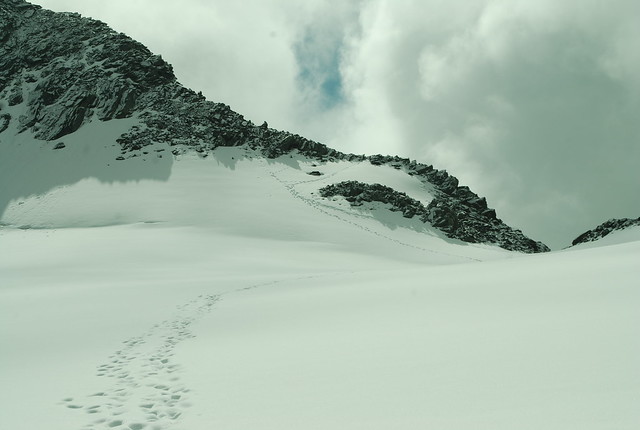 Into the upper bowl, avoiding a crevasse. The snow is in that irritating state where you step on it, and it almost holds, but it doesn’t quite, throwing you off balance and wasting energy. Which is partly avoided by using the existing footsteps, but that constrains my stride. To the “col”, the Obere Holltalscharte: 3260 m, 3:45. This particular col looks like one of those nominal cols: its the lowest point between two sides, but that doesn’t mean you’d want to descend the far side: it looks icky (or is that from further along the ridge?). But then again, things always do from above. There’s not the slightest sign of any path marking on the ridge, so the footsteps are reassuring, even if I completely lose them almost immeadiately. 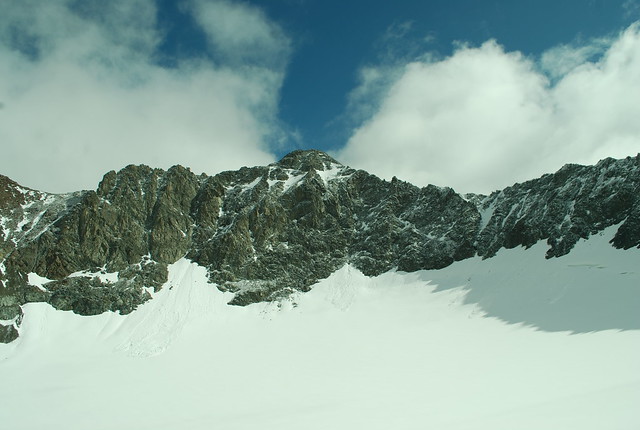 The ridge looks enormous and sharp from below. The pic above, centered on the summit, totally fails to give any idea of scale. 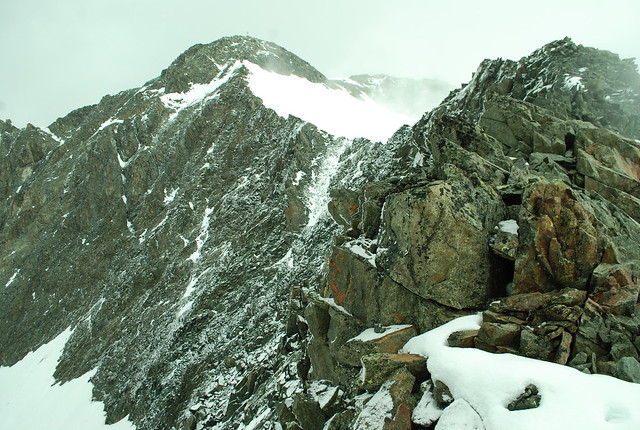 This one’s a bit better (and note the weather is closing in a bit, always reassuring). The ridge is in three: a shortish ascent section, perhaps 150 m long, to pt 3326 (NOTE: especially in descent, especially in cloud: there’s a small cairn on this peaklet, which is very valuable, because at this point the ridge kinks, and if you miss that and keep going straight SSW you’ll end up on the Schafnock, 3110 m, which is very unlikely to be what you intend), which I’ve passed by this pic. Then a longer section, perhaps 300 m, nearly level to pt 3368, which I’m pretty sure is the right skyline in this pic (one from 6 mins earlier); then another 300 m section up to the summit at 3473 m (my GPS thought 3479 m), with the upper Ruderhofferner on the right side.

Apart from one move at the start, when I gratuitously did things the hard way, the ridge is all easy enough (as long as you’re fit – don’t even think about this if you’re not) at least step-by-step. Its only the sheer length, and the sense of complete isolation, that makes it hard. And of course the uncertainty of knowing if it will be hard – you can only have that once; treasure the feeling. But I think there is a motto – that these long ridges, which I’ve always rather avoided, aren’t so bad after all. 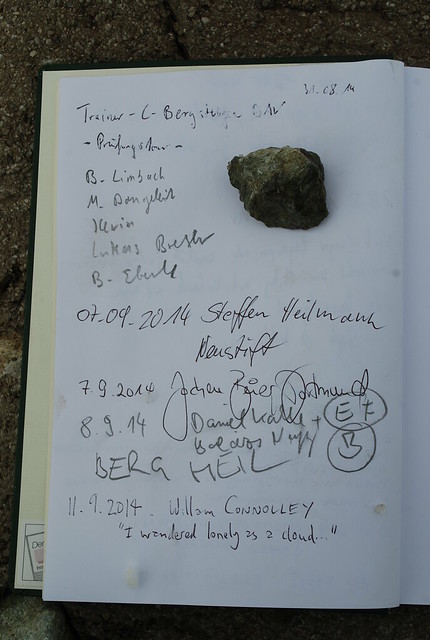 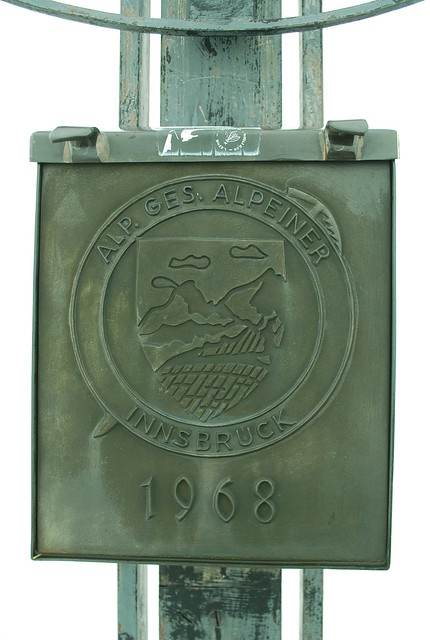 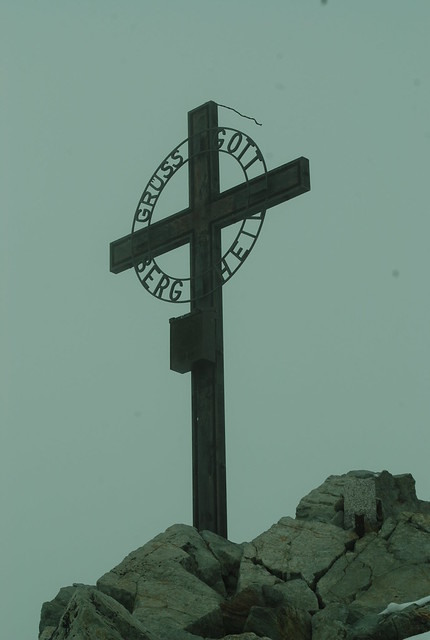 The summit, which came quite quickly in the end. See, I have the gipfelbuch pic to prove it (and one of me looking smug). “Gruss Gott, Berg Heil”. Very Austrian. The ridge was fun: some just walking, some scrambling, some being rather careful where you put your feet; nearly every step requires concentration, and deciding which drop to veer nearer to. 4:40, 9.7 km. 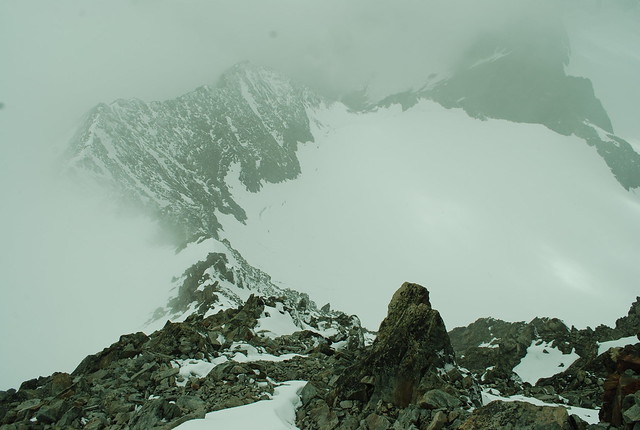 View from not much below the summit, heading down (I could tell you to note the total absence of life, but I’d be wrong; its all around if you but look). I’ve sat around for about half an hour getting my breath back, and hoping the cloud might clear, which it has a bit. The col is top centre, and the “three sections” of the ridge reasonably obvious. Alas its even less clear off to the E, which means I don’t get to see the route I should have taken, yesterday. 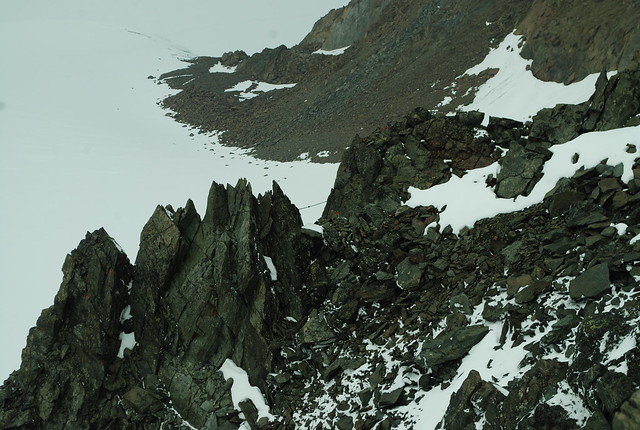 Half way down the ridge, and if you look carefully you’ll see the cable between rocks in the centre of this pic. That might be route 2291, or some variant, whereby you join the ridge somewhat later having gone up the rock face from deeper into the upper snow bowl. 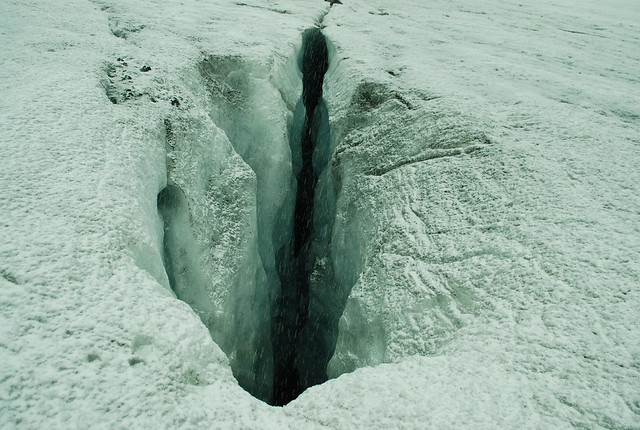 And so back down. Viz is rubbish, so I’m happy to follow my footsteps. Here’s a rather suggestive-looking stream flowing into the glacier; its also snowing, if you look hard. Sine the glacier is dry, this is easy to see and avoid. But it would be pretty dangerous to fall into: completely smooth inside, about 20 feet deep, you’d just wedge in place and get covered in ice cold water. 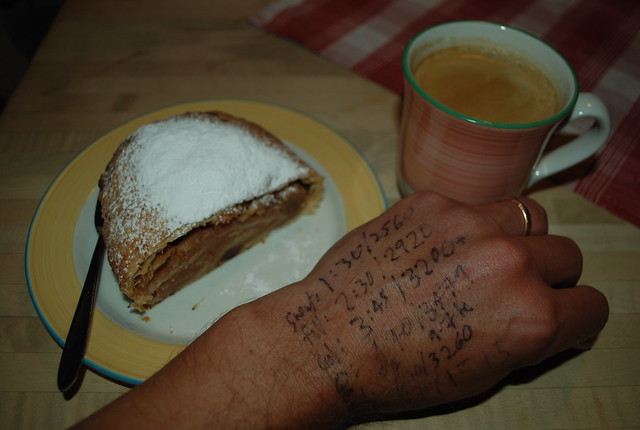 And so back to the hutte for cafe und kuche, and to transcribe my timing notes off my hand. 8:45 total. Outside its now pouring with rain. That’s nearly it for Austria until next year. I shall return to the usual diet of climate snarking soon enough. 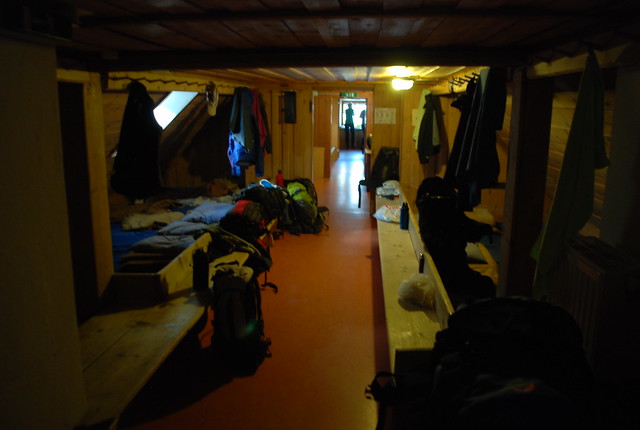 And in case you’re wondering, this is what the dormitory (matrazenlager) looks like.