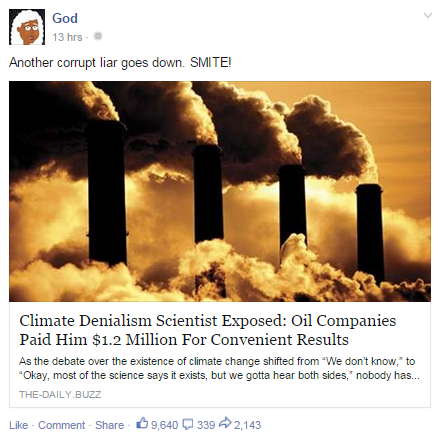 Or at least, that follows clearly from the latest nonsense from Wattie-land. Greenpeace enlists Justin Gillis &John Schwartz of the NY Times in Journalistic Terrorist Attack on Willie Soon – Miss Target, Hit Smithsonian Instead. If the NYT is “terrorist” then so am I. Of course, the Smithsonian is investigating Soon, so perhaps they’re terrorists too?

Worse for Soon, I found this in my facebook feed, from God. I’m not suggesting that God (who is currently a black lesbian regretting that she created periods) is likely to smite Soon, but this kind of publicity in the general-o-sphere, as opposed to the usual knockabout in the blogosphere, is the kind of thing that gets you thrown under a bus.

The WUWT piece is full of the usual attempts at disdain: I cannot bring myself to quote from this unconscionable piece of journalistic malfeasance… Author’s Comment Policy: I am so sickened by this that I really don’t care to discuss it, but others may choose to do so – feel free. I’m not sure what they expected: everyone to maintain a respectful silence after the author flounced out? But of course that’s not how it works; and so after everyone did indeed discuss it, the author joins in, entirely forgetting his own “policy”. These people have the attention span of a goldfish.