Well, here it is: 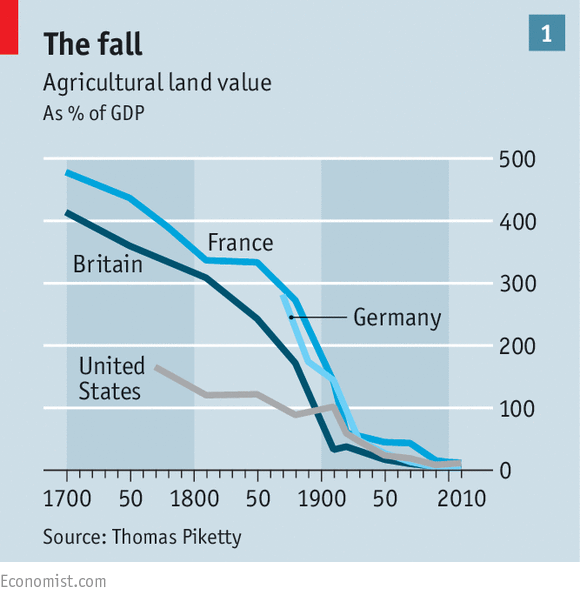 Why am I showing you this? Mostly because its rather striking, partly because it forms part of the things Piketty got wrong thread, but mostly for the relevance to the “infinite growth on a finite planet” type argument. Many people will tell you that infinite “growth” on a finite planet is impossible, though they will usually be a touch vague about the meaning of the word “growth” (see Economics and Climatology? comments). Others will tell you that “economic growth” isn’t necessarily resource constrained, and so infinite growth is perfectly possible.

* Piketty and the case for land capital – FT Alphaville.
* Land-shackled economies: The paradox of soil – the Economist: “Land, the centre of the pre-industrial economy, has returned as a constraint on growth”.
* So why is it that everyone hates libertarians?
* Bjorn Lomborg demonstrates why universities should steer clear of him – Brian at Eli’s.
* Murphy’s Law? or, Follies of a Finite Physicist by Noah Smith. Taking Tom Murphy’s “economist” apart.
* EconoTrolls: An Illustrated Bestiary
* Paul Krugman’s Quite Right: Just Where Is All The Growth? – Timmy.

88 thoughts on “Agricultural land value as a percentage of GDP”