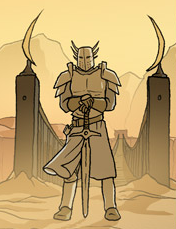 I must admit that I’m surprised, because up till now I’ve not detected this, or heard of anyone complain of it. Routine censorship, of course, but fakery is a new thing. So:

Potholes In Their Arguments is a post on the recent IMF report. I put in a comment pointing out that it was a bit late to the party, others already having said the same thing (and, I didn’t add, had said it with less verbosity; the prose there is somewhat prolix). That got an unexciting reply, to which I responded:

Plenty of other people got there ahead of you; try http://www.forbes.com/sites/timworstall/2015/05/19/imf-report-on-5-3-trillion-in-energy-subsidies-careful-its-not-quite-what-you-think/ for example. Ignorance of prior art is part of what’s holding you lot back.

Notice the date and time; that’s because I cut-n-pasted it straight from the WUWT page after I submitted it. And kept a copy of it, as I’ve learnt to do.

Plenty of other people got there ahead of you; try http://www.forbes.com/sites/jamestaylor/2015/05/19/updated-nasa-data-polar-ice-not-receding-after-all/ for example.”

Thanks for an interesting article on the total global sea ice coverage, William. However, I fear I don’t see the relevance to the current discussion…

And now I look at “my comment” on the WUWT page, I discover that it doesn’t say what I wrote. Someone has faked in the wrong link. Oddly enough, my subsequent complaint of fakery didn’t get published.

This seems to me to be below barrel-scraping from AW and his merry gang of clowns. I’ve learnt that they’re often so desperate to “win” that they need to censor those with unwelcome views; but actually faking comments I would formerly have said was beneath even them.

I wondered if I’d somehow made a mistake, implausible as it seems. But no; they really had faked it. How can you tell, for 100% sure, even if you really want to deny it? Because the original has now been silently restored (sigh; now switched back to the original fake). Just to prove how incompetent they are, though, the response to the original fake is still up: here’s an archive (sigh, again; no, that’s not a useful archive) and screen capture: 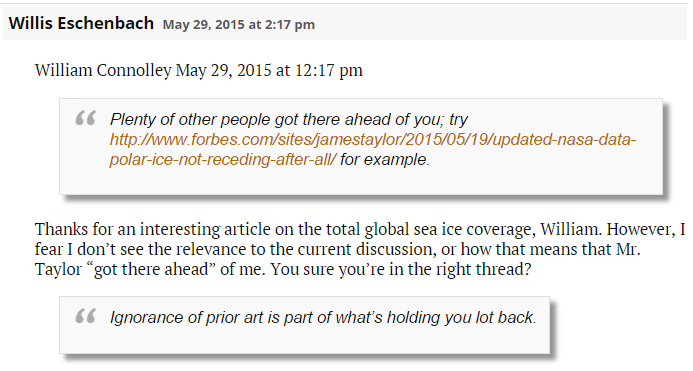 * …into the bucket of jellied eels
* A child’s garden of wikipedia, part I
* Is surfacestations.org dead?
* Regret theory in practice – Bronte Captial.
* The now-retracted Science paper on gay canvassing: he lied about the funding of his study to give it more credibility – um, you could see how that would work.
* No, blog posts cannot replace scientific articles -VV