Arrr, the ol’ spinnin’ post, its seen a thing or two over the years. You could probably reconstruct the headship changes from its various colours. Last painted by Downing, when they went head in Lents in 2014; Caius were too cool to repaint it when they stayed head in Mays of that year, or re-took the Lents headship this year.

Sakata Eio, in “The Middle Game of Go” (volume 1, game 3) writes “we are going to examine the lost chances and the potential that existed for better and more interesting moves”. Which rather summarises these bumps; while exciting, they could have been even more exciting. Caius stayed head, but there was lots of action along the way.

The surprise of Day 1 was Downing, traditionally #2, going down to LMBC, traditionally #3. That happened about half way down the reach; I did a double-take when I saw it, it was so unexpected. They went down another two places, too, and were only saved from spoons by an error by F+T on Friday; but they weren’t rubbish; just not fast enough with the crews around them. Their women stay head comfortably, though.

Day 2 saw Downing go down to Pembroke, who gained attention as clearly a fast crew, who would get their chance at headship. And LMBC had their chance at Caius, but didn’t threaten them. That same video shows Pembroke quite distant at the Plough, perhaps 1.5 lengths; but they closed very quickly after that.

Clearly it would take Pembroke longer to catch Maggie than it had taken them to catch Downing; so imagine my disappointment when I’d carefully placed myself between the Plough and Ditton, only to watch Caius rowing over unchallenged with a vast gap behind; Pembroke had caught LMBC coming into grassy; presumably, they’d not had the heart to fight it out. That left me following Jesus, with F+T chasing Downing in the distance; that was where the action was but pushing past is considered rude. What you see is F+T stopping after they thought they’d bumped Downing, who row on unconvinced; it turns out they were right. Jesus rowed past the stationary F+T, not realising, and had to be told by the umpires “stop, you’ve bumped”. Which I thought a slight shame: what ought to have happened was F+T getting their chance at LMBC; because having Jesus bumped again by F+T would be dull. But…

Saturday was rainy, unlike the glorious weather of previous days. I opted to be naughty, but to salve my conscience: I’d cycle in the Caius–Pembroke gap, but not naughtily film. Which was a good idea as despite the rain there were well over 4 bikes per crew (how odd) and the gap shrunk alarmingly, with Pembroke closing fast. By just before the Plough they were perhaps a canvas down when suddenly! They caught a crab [Update: better vid]. That’s not supposed to happen in M1. They restarted quickly but it was all over; Caius were back to 2 lengths. What we’ll never know is whether Pembroke had thrown everything at the start and had effectively blow up by the Plough; hence the crab. Or if they had more in them and could have mown down Caius. And just to prove me completely wrong, Jesus caught Downing. 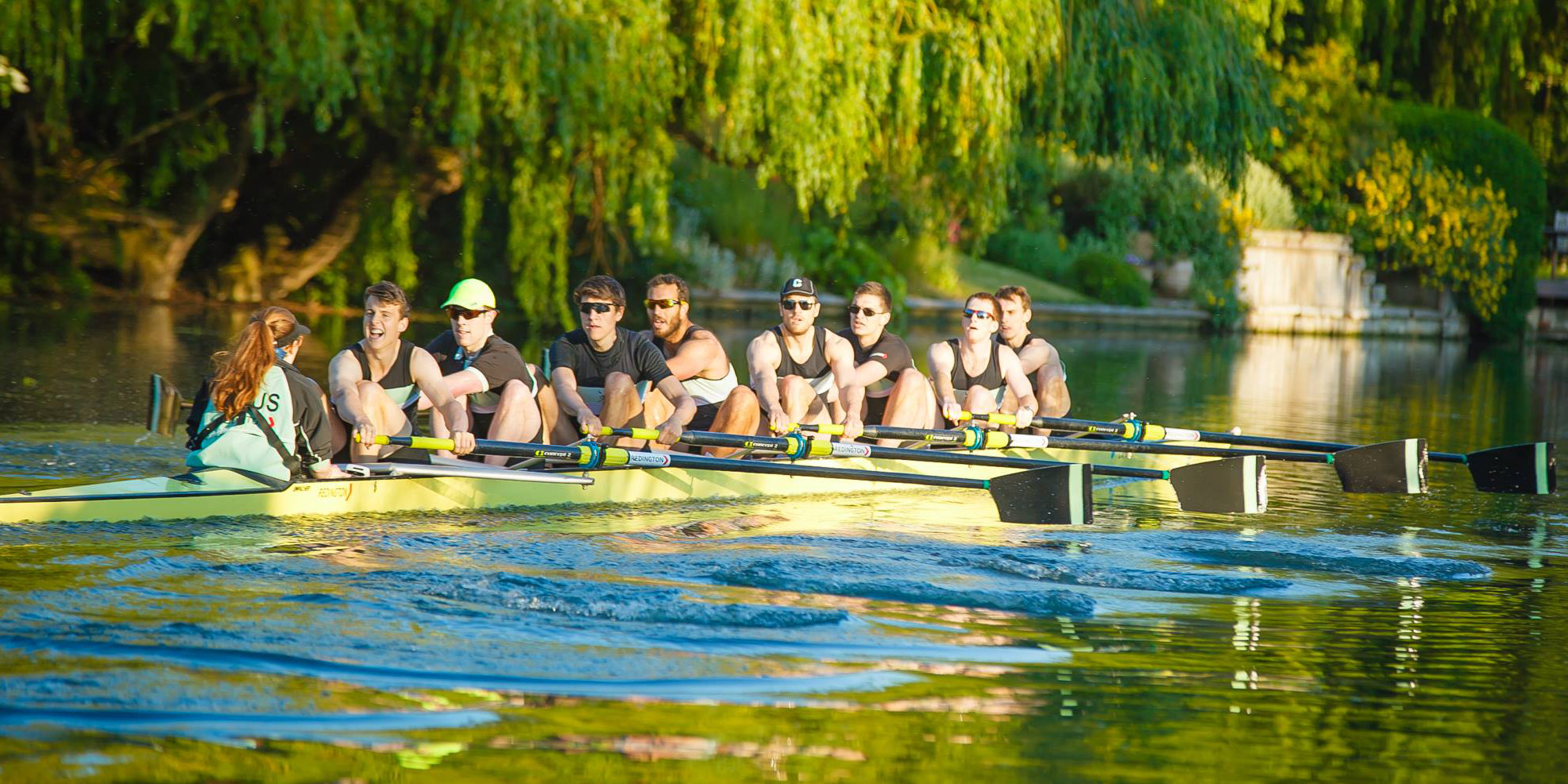 Shameless fanboi stuff, but its a great picture; from Thursday, when it was sunny. From QTy Photography.