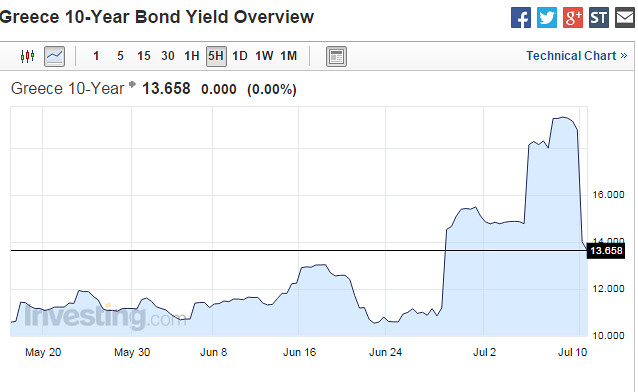 I feel like writing about the Greek crisis. I discover that I wrote about the last one, so I’ve nicked my witty headline from then.

The situation as it is now, or at least my reading of it: the Greeks have caved in. After lots of posturing, the reality of two weeks of banks shut and no other way out than leaving the Euro has left then against the fundamental political reality of their present: they want to stay in the Euro.

Numerous people have argued that Greece should leave the Euro, including some who believe that the Euro is in principle a good idea. However, that’s not what the Greek people want. They want to stay in, by a margin significantly larger than voted “no” in the referendum. Quite why is open to speculation; its doubtful that even a small minority understand the economics. My guess is that they very definitely want to stay in the EU, and fear that exit from the Euro might be a slippery slope to leaving the EU1; or being second-class members like us; or they’re just mixing up the concepts. But it hardly matters: what matters is that they wanted to stay in.

Despite that, Greeks like free money, early retirement and a life on the beach as much as anyone else, so last January they voted in Syriza on a platform that yes there really are fairies at the bottom of the garden who will hand out free money with no strings attached and no hard work required. No, it never works out in the fairy stories either; there is always a catch. This was a shame, as the government voted out was finally starting to do some sensible things; so it goes. Democracy is the theory that the common people know what they want, and deserve to get it good and hard. 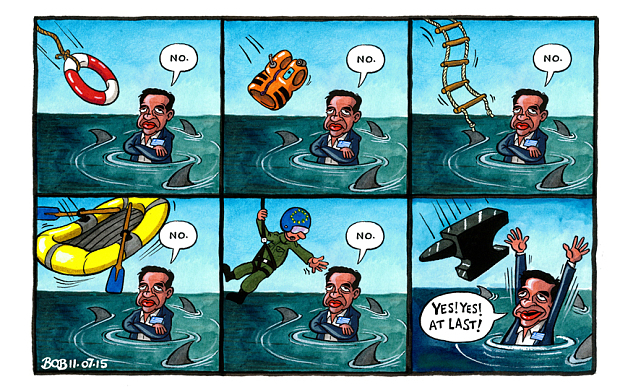 Syriza, I think, genuinely wanted to deliver an end to austerity, but are fundamentally incompetent, so couldn’t. The only way out was to leave the Euro, which would have been risky, but the only way to get there would have been to believe it and prepare the people for it; they weren’t going to do that. So we were treated to the spectacle of five months of incompetent negotiations. International diplomacy is tricky, I think. Especially dealing with new people. People get taken on trust, to some extent. Its taken quite a while for everyone to realise how useless Syriza are.

There’s a lesson here, also available from Syria or Mogadishu: incompetent government is the worst thing. The proposals Syriza are putting forward, now, are about the same as what they could have put forward five months ago. All this time has been wasted. I’ve seen numerous people write, gleefully, about how marvellous the Greeks are for sticking up to the capitalists, or similar phrases. These people are idiots, and their words just empty sloganeering.

Or as Kipling put it (noting of course that “Gods of the Market” needs to be interpreted):

Then the Gods of the Market tumbled, and their smooth-tongued wizards withdrew
And the hearts of the meanest were humbled and began to believe it was true
That All is not Gold that Glitters, and Two and Two make Four
And the Gods of the Copybook Headings limped up to explain it once more.

As it will be in the future, it was at the birth of Man
There are only four things certain since Social Progress began.
That the Dog returns to his Vomit and the Sow returns to her Mire,
And the burnt Fool’s bandaged finger goes wabbling back to the Fire;

Enough useless carping. What should they do?

If it was up to me, they shouldn’t have elected Syriza. But, lets say what should they do starting now; we’re not allowed to go back and change the past. Then I think they really need the restructuring. They should be doing that anyway, starting now, not using it as a bargaining chip.

Addendum: Yes to the Euro?

As I’ve commented, the std.econ case for Greece leaving (indeed, never having joined) the Euro appears to be strong (disclaimer: I’m not an economist, so I’m going with the flow of people I trust). But as I’ve also commented, this isn’t a pure econ decision. Nor are we able to rewind time and have them not join; nor can we give them the option of leaving at a time of their own choosing when things are otherwise smooth. Leaving now would be an emergency decision in a time of crisis, and quite likely a bad idea even from an econ perspective. Like mt, I’m not terribly convinced that std.econ covers dynamic situations well.

So its interesting to read Yes to the Euro! by “30 internationally recognized Greek economists issued a clear declaration in favor of YES in the referendum of July 5, 2015 (published on the front page in Kathimerini, 30.6.15)”. As you can tell from that, while the core argument is over the Euro, it merges both sides into EU too; so the two are always linked. Para 2 is a about the short-term chaotic consequences, which (I agree) Greece isn’t well prepared to handle. Para 3 is more interesting though, and provides a long-term reason for staying in:

Modern, prosperous economies in Europe and the world are based on the market and on healthy competition… an efficient public sector, which operates independently of the current government… Greece’s participation in the core of Europe fosters long-term convergence to European institutions. By contrast, a Greek exit from the euro would strengthen the tendency to clientelist structures and aggravate the timeless pathologies of the Greek economy. This inevitably leads to a closed and impoverished economy with high corruption levels.

I agree that’s a good argument: Greece needs the discipline of the Euro; without it, it will sink back into the problems that have got it where it is. Whether its stronger than the std.econ argument that the-Euro-is-not-an-optimal-currency-area, blah, I can’t tell.

BTW, in case it wasn’t obvious, my made-up headline is a reference to the 2011 “Greek PM drops euro referendum plan”. Not to anything rude.

A thought I meant to add earlier. Any number of articles (example) note that the EU has lost trust in the Greek government. But they’re being asked to trust the Greeks again: here’s another set of proposals, late, clearly rushed. Do we believe that you’ve even thought them through? Unlikely, in the time available. Have we got time to think them through, carefully? Can we talk through them, so we can trust that you really understand them and will indeed implement them? There’s no time. Do your statements outside these meetings indicate that you’re committed to seeing these reforms through? No, quite the reverse: outside the meetings the Greek govt presents fiery rhetoric and accuses the Germans of terrorism. There is every reason to think that they aren’t committed to these proposals. So how do the EU tide them over the current crisis, and yet keep the Greek feet to the fire?

Some answers, for example from the Graun. I think the language they’re using there is deliberately inflammatory – this is irresponsible of them – but the (deserved) lack of trust in the Greeks is plain.

A feature of this crisis has been a variety of people – mostly the Left -going “ra ra! Go Greece, stick it to the Capitalists!” These people are idiots. In their defence, they aren’t thinking at all: they’re simply projecting what they want onto the current crisis, which happens to be this one. They know nothing about what is going on, but that doesn’t bother them, because they aren’t even trying to talk about what is going on.

[Added 2015/07/23] As this story in the Australian says, Alexis Tsipras remains popular despite chaos. So although I think he’s a twat, he’s probably the best person to stay as PM, at least for the moment. As long as he leaves the economics up to someone competent, and sticks to keeping everyone happy with a very unhappy deal. At the moment, stability is good -W]

* Greece debt crisis: Greek MPs to debate controversial reforms plan
* Greeks facing day of judgment in struggle to stay in eurozone
* Greece: Past Critiques and the Path Forward by Olivier Blanchard
* The end of the lifeline – plumbum. You should probably read this too; though it was written two weeks ago. I agree with much of it, but not the “chicken” bit: the Greeks have been playing it as a game, yes, but the EU haven’t been; and the Greeks are now discovering that their chicken is going to smash into an oncoming tank.
* JJuly 13, 2015 4:11 pm: Alexis Tsipras faces showdown with his own party – FT
* The Economist explains:
What Greece must do to receive a new bail-out – Jul 14th 2015, 15:33
* IMF stuns Europe with call for massive Greek debt relief – Torygraph.
* AN UPDATE OF IMF STAFF’S PRELIMINARY PUBLIC DEBT SUSTAINABILITY ANALYSIS: Greece’s public debt has become highly unsustainable. This is due to the easing of policies during the last year, with the recent deterioration in the domestic macroeconomic and financial environment because of the closure of the banking system adding significantly to the adverse dynamics.
* More fuckwittery, this time from Reuters, July 17, 2015.