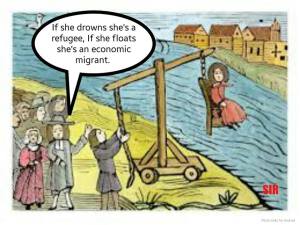 Someone (I forget who; remind me and I’ll thank you) pointed me at Everything You Need to Know About the Exxon Climate Change Probe but were afraid to ask. That article makes some points I’ve already made (While environmental advocates have cheered Schneiderman’s effort to take energy firms to task over a global crisis, some legal scholars question whether he is the right man for the job. “You wonder why this is the sort of thing that a New York attorney general should be doing,” said James Fanto, a professor at Brooklyn Law School. “It seems like it’s just completely politically motivated.” Or perhaps “The big issue for Exxon here is what’s material,” said James C. Spindler, a business school and law school professor at the University of Texas-Austin. “Assuming they did have some research they didn’t disclose, that would be an omission,” although it might not be material if “the information is already out there” and available to investors. A question Schneiderman needs to answer, Spindler said, “is whether Exxon or other similarly situated energy companies are in a special position to have information that the rest of the world doesn’t.”

Anyway, its worth reading; I won’t quote it all. Another part I found interesting was On Sunday, meanwhile, Schneiderman reached a settlement with the largest U.S. coal miner, Peabody Energy. Which leads to Peabody Energy Resolves N.Y. Probe Into Climate Disclosures. And the settlement? That article says In a formal announcement of the agreement on Monday, Schneiderman said the company will file revised shareholder disclosures with the U.S. Securities and Exchange Commission and has agreed that all future statements to shareholders will be consistent with the terms of the accord.

Which must be pretty good news for them: no penalty, just a few revised statements. Who “won” depends on who is looking. Forbes says “Peabody, N.Y. Attorney General Reach Underwhelming Settlement On Climate Change Disclosures”: The world’s largest private-sector coal company has settled an eight-year-old dispute with the New York State Attorney General’s Office over its climate change disclosure practices by agreeing to what appear to be minor tweaks in how it will draft certain federal securities filings. Whereas Inside Climate News says “Peabody Settlement Shows Muscle of Law Now Aimed at Exxon”: Coal giant’s climate change settlement is ‘unprecedented first step’ in forcing honest disclosures from fossil fuel companies, NY attorney general says.

Which one is right? I’m with Forbes on this. Notice that ICN calls it a 2-year investigation, but Forbes thinks its 8. The Graun agrees with 8, as does Peabody’s press statement so I think it was 8.

And the message to Exxon? I can’t help but think this will cheer them up. The similarities are strong: the Graun even helpfully reminds me that Peabody has a history of telling porkies about GW too.

[Update: since everyone is pushing the tobacco analogy, I’m interested in examples. I haven’t seen any good ones yet. There’s an appallingly bad one at Curry’s which really shows how astonishingly low she has sunk -W]

* Freeman Essay #13: “The Nanny State” about the US legal settlement with tobacco companies at CH. Unsurprisingly, he’s against it.

30 thoughts on “Exxon: the Peabody analogy”