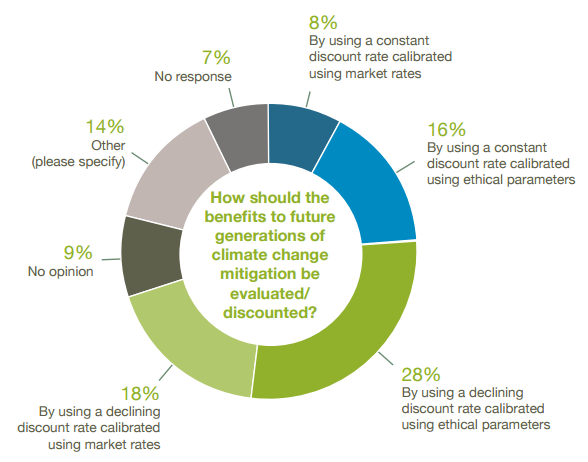 Expert Consensus on the Economics of Climate Change is a report from the Institute for Policy Integrity1, and comes to me via Slate via Twitter. I read the paper and failed to find the obvious flaws, so over to you.

They ran a 15-question online survey… We invited the 1,103 experts who met our selection criteria [publication in journals] to participate, and we received 365 completed surveys. The survey data revealed several key findings [trimmed]:

• Economic experts believe that climate change will begin to have a net negative impact on the global economy very soon – the median estimate was “by 2025,” with 41% saying that climate change is already negatively affecting the economy.
• Respondents overwhelmingly support unilateral emissions reduction commitments by the United States, regardless of the actions other nations have taken (77% chose this option over alternatives such as committing only if multilateral agreements are reached).
• The vast majority (75%) of respondents believe that the most economically efficient way for states to comply with the U.S. Environmental Protection Agency’s “Clean Power Plan” carbon regulations is through “market-based mechanisms coordinated at a regional or national level (such as a regional/national trading program or carbon tax).”
• …a constant discount rate calibrated to market rates – was identified by experts as the least desirable approach for setting discount rates in the context of climate policies. Nearly half (46%) of respondents favored an approach that featured declining discount rates, while 44% favored using rates calibrated with ethical parameters.
• Experts believe that there is greater than a 20% likelihood that this same climate scenario would lead to a “catastrophic” economic impact (defined as a global GDP loss of 25% or more).
• Our findings revealed a strong consensus (69%) that the “social cost of carbon” should be greater than or equal to the figure currently used by the U.S. government (only 8% believe the value should be lower).

It is all interesting, so I recommend reading the report. Much of it was surprising to me; most obviously, 50% chose “Immediate and drastic action is necessary” as their response to “Which of the following best describes your views about climate change?” Perhaps this is a question-phrasing problem; but they also had “Some action should be taken now” available as a choice, which 43% picked, so I can’t quite see how. 41% picked “Climate change is already having a negative effect on the global economy”, 22% “by 2025”, and 26% “by 2050”. OTOH, figure 13, the median estimate for effect of +3oC on global output is small-negative. I was pleased to see that 75% went for “75% Market-based mechanisms coordinated at a regional or national level (such as a regional / national trading program or carbon tax)” as the most efficient mechanism; by contrast, performance standards got 13%.

On the vexed question of discount rates – which has come up before – they surprise me again by going for some wishy-washy ethical stuff or a declining rate. On the possibility of catastrophe, always a popular one, they take some care2 with their phrasing: “Some people are concerned about a low-probability, high-consequence outcome from climate change, potentially caused by environmental tipping points. Assume by ‘high-consequence’ we mean a 25% loss or more in global income indefinitely. (Global output dropped by approximately 25% during the Great Depression.) What is your median/50th percentile estimate of the probability of such a high-consequence outcome if global average temperature were to increase 3°C by 2090?” The median estimate looks to be essentially-zero, but the average is 10-20%.

As a last hurrah, they estimate from their responses an implied present-day social cost of carbon at a little under $100 per whatevs.

1. About which I know nothing. Wiki on Richard Revesz says After [Retaking Rationality: How Cost Benefit Analysis Can Better Protect the Environment and Our Health] was published in 2008, Revesz and Livermore co-founded the Institute for Policy Integrity, a NYU Law-affiliated advocacy organization and think-tank dedicated to improving the quality of governmental decision-making. Established in the last few months of George W. Bush’s presidency, the institute quickly got in the news for spotlighting the Bush administration’s rush to adopt a raft of controversial regulations, known as “midnight regulations”.

2. Despite their care, they have not been sufficiently precise. Indeed, Timmy blows an enormous ambiguity in their words (see comment 2); so huge, that its hard to understand how they don’t plug it.

* Climate Change Policy: What Do the Models Tell Us?

24 thoughts on “Expert Consensus on the Economics of Climate Change?”