Bored with force X from outer space? Was Force F just too fuckwitted, and part 22 just too dull? Then why not play “hedge funds”? Hedge funds do lots of complex maths and make lots of money (only not so much recently); they also have the advantage of being opaque. So play today, with Jo Nova and her band of performing marsupials. Yes, I know, its a picture of a monkey with an arrow up it’s bum, and a monkey is not a marsupial. But no known mediaeval manuscripts feature marsupials.

Context, context: I forget the context in my obsession with primate posteriors. coolfuturesfundsmanagement is, like, a hedge fund. Run by Jo Nova! And some others. Or perhaps better, a wannabe hedge fund with a severe shortage of moolah. And its going to hedge against cooling, maan. Tagline: “Are we preparing for catastrophic warming when we should be preparing for cooling?”

[Update: via RS’s “Zombies of the Stratosphere” I found a great B-movie review site; you should read their review of Absolute Zero, not my maunderings.]

Who were those masked men?

* David Evans, chief pusher of force X. Um. He can do fourier analysis with a following wind.
* Jo Nova, assistant chief pusher of force X. She can do… PR?
* Stephen Farish. Who? “He built the SES model used to determine funding schemas in Australian Government health and education programs”. He appears to be an assistant prof at the Uni of Melbourne, and associated in some way with Michigan, but I couldn’t find any papers post-2013. Not an obvious member for the board of a hedge fund.
* Chris Dawson “is an entrepreneur and manager” – ooh, exciting, tell me more – “having founded and run numerous innovative enterprises” – oh. Could you be more specific? “His current roles include CEO of the Lord Monckton Foundation”. Oh. Oh dear. CD, and SF, are remarkably google-light; as though they weren’t heavyweights.
* Andrew Vallner “is an external consultant to the fund. He is an experienced asset consultant”. He does appear to exist, currently running CPG a small-looking investment advice group. Looks like the only one with any kind of investment credibility, and that is thin. Curiously the bio mentions CUNA but not CPG; and I find no news of his time at CUNA. There’s a (self)bio here.

And don’t get me started on all their website photos being freebies, the cheapskates.

If we pretend to take this seriously as an investment plan, we can do what no sane investor would do and disregard the credentials of the people running this thing, and instead look at their plan for Making Money, which is what hedge funding is all about.

They have a three-step spiel: one: DE has brilliantly shown that current climate science is all wrong; two: solar theory is right, and strongly suggests cooling; and three: As we approach this period of global cooling, and the leading indicators are evident, we will better refine the timing, magnitude and investment strategy. Ah: could you explain again how you’re going to make money out of that? Citizens of the West are watching the miscalculation of value and massive misallocations of their pension funds and long term prosperity. Our plan is to stop this mindless waste. Very nice, do go on: With a self funded, highly profitable due diligence process and cost benefit analysis on the science, economics and finance of climate change, we will literally hedge our bets on climate change and on changing climate change policy. Still a touch opaque, no? Fortunately, they ask themselves a Penetrating Question: What and how should we invest, if we know that carbon dioxide is ‘innocent’ of being the main cause of catastrophic global warming*; and that the timing (soon), magnitude (significant) and sign (cooling) of the next major climate shift will have an impact on many markets and economies? But: do they answer it? 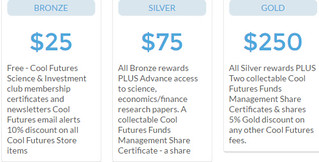 Under “what can you do?” they have two options. “Larger sophisticated investors” can, effectively, talk to CFFM, how nice for them. For the plebs, there’s crowd funding mechanism. This has a nice “donate” button, which would appear to be an odd way to “invest” your money; but $250 buys you errm, a gold badge and some “collectable” share certificates, somewhat like cigarette cards I suppose. Oh oh hold on: from the “plan”: The hanging of your Cool Futures Funds Management share certificate on your wall will be a small but empowering action you can take representing the start of something big and something ultimately positive and beneficial and scientific. Oh come on, can anyone but the Faithful possibly fall for that?

So, I should be reading The Plan. Kewl. Let’s go:

We believe the Cool Futures Hedge Fund will publicly, economically, politically, scientifically and financially challenge and – on so many levels destroy – the catastrophic anthropogenic [man-made] global warming (CAGW) paradigm and draw attention to all the weaknesses in the myth that ‘human emissions of carbon dioxide is the dominant cause of dangerous, unprecedented, runaway, unstoppable global warming’. Our aim is to create a self funding high profile vehicle designed to inform the world of carbon dioxide’s innocence, extract significant value from the collapse of the CAGW paradigm and to help prepare the world properly (with prosperity) for natural climate change, whether in the form of global warming or cooling.

That reads to me like someone has forgotten they’re supposed to be a hedge fund, not a pol or a blog. Then we move over the Yet More Plan (this has weird echoes of force X, where one page would tantalisingly almost reveal the answer, only to push you onto the next page, repeat ad nauseam). One part of the Yet More Plan has already failed:

A number of alternate strategies will be further refined and revised to ensure the red team media take the bait and attack Cool Futures, providing it with global media exposure in the lead up to Paris.

They weren’t attacked, they were ignored. But – oh noes! – Now I’ve fallen for their cunning plan and attacked them. Damn, they’ye clever than I though.

Jo Nova now has a blog post pushing this stuff – so I suppose I’m in a race with Sou, has she got there yet? No, good – in which even more plan is revealed, by CD no less:

Yes, that’s right, the plan is to work by analogy with movies. How could that possibly fail? To be fair, as in the end I suppose I have to be, they do say

The vast sums of money diverted and misallocated to reducing carbon dioxide emissions by solar panels, wind farms, electric cars, ‘carbon trading’ and so on, will inevitably lead to a collapse of these schemes through sheer economic waste. This collapse will produce numerous opportunities for profit.

And that’s not entirely ridiculous. There are indeed vast misallocations of money in subsidies (because we don’t have a Carbon Tax). However, the existing market knows this; it isn’t clear CFFM has any special advantage. I’ll spare you phase 2, because it is vacuous, but phase 3 isn’t much better:

As it becomes obvious we are entering a period of natural global cooling, we will have timed the taking of various profitable positions for maximum return, especially in agricultural and energy commodities. The current low price regime that has emerged provides fertile ground for good value selection of long positions.

This is a long-term strategy and is, again, competing against all the other players with no special advantage. They don’t have a hope.

Are these people serious?

Who knows? I did run across I’m putting my money where my mouth is and betting against climate change – “I’ve invested in a fund that will aim to short-sell overvalued renewable energy stocks” by… wait for it… James Delingpole! As you’d expect from Dellers, it’s a disappointment: he’s spent1 $75 on a bronze badge. Which means he doesn’t believe in it.

FWIW, these people have a Fb page. You should go troll them: I did.

1. Sou points out that the list of donors doesn’t obviously include D, so it is entirely possible that he is lying about the $75; it would be unsurprising.

* THE NORTHERN ROCK OF THE CAYMAN ISLANDS ICECAP: HE HAS A CUNNING PLAN.
* dailykos
* Update from HotWhopper 2017/02: it isn’t looking any better.
* The Most-Hated Bear in Solar Isn’t Backing Down by Brian Eckhouse, February 16, 2017.