Warning: tedious navel-gazing. Go elsewhere for substance. Partly this is to explore something I haven’t seen before.

If I attempt to view this tweet I see 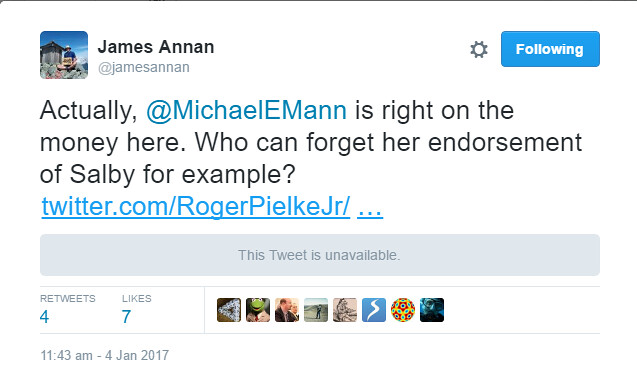 And if I then checkup twitter.com/RogerPielkeJr?visibility_check=true I see:

Obviously, if I actually just want to read it I can log out, or go via some intermediary, such as archive.is. So I know that the Text I May Not See is I’ve seen a lot of ugly in the climate wars, but Mann’s comments on Curry’s resignation are incredible (not to mention empirically false). JA replies Actually, @MichaelEMann is right on the money here. Who can forget her endorsement of Salby for example? and I think he, too, is bang on the money. If you’re wondering what Mann said, I think it is from Judith Curry retires, citing ‘craziness’ of climate science in ClimateWire:

She has played a particularly pernicious role in the climate change denial campaign, laundering standard denier talking points but appearing to grant them greater authority courtesy of the academic positions she has held and the meager but nonetheless legitimate scientific work that she has published in the past… Much of what I have seen from her in recent years is boilerplate climate change denial drivel.

But why am I blocked? I suppose I could just ask him, but that doesn’t come naturally. I don’t tweet much, so he can’t complain about spam. I don’t think I’ve even been rude about him on Twitter, though I have been on the blog. But then again, I’ve been nice too. Such is the world of false balance.

Incidentally, I should pull out and consider meager but nonetheless legitimate scientific work that she has published in the past. This, of course, is the direct inverse of her own line, the puff that starts the ClimateWire piece (“distinguished herself in the field decades ago with research into the Arctic and the causes of the climate feedback that have shaped the region…”) and Peter Webster’s “Judy ranks extremely highly in many areas of science ranging from radiation theory, cloud physics, thermodynamics and arctic climate… she has major contributions in extended prediction… her extremely high citations and scientific influence”. The truth I think lives somewhere between those two. I’m sure I’ve written this before but can’t find it now: from recollection, she is a medium rank sort of person, who never really made it. So “meager” is rather unfair, but then “extremely highly” is well over the top. It often seemed to me that her obvious unhappiness was in large part jealousy of people she perhaps thought had got undeserved prominence.

* The most important political takeaway from the Mann defamation case against denialists – Brian at Eli’s.