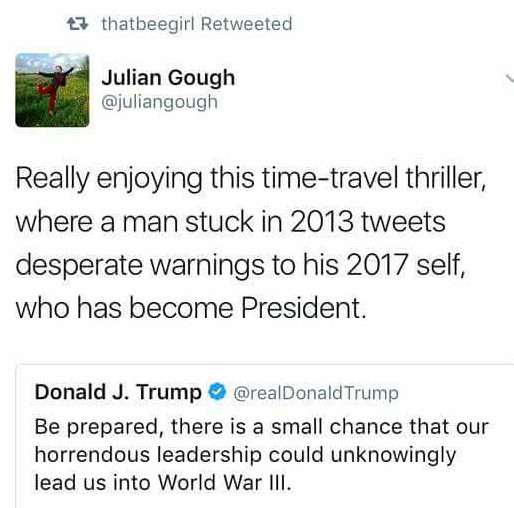 I find myself unable to resist the calls to comment on the surprise calling of an UK election. But while here I’ll comment on Trump, too.

Theresa May seeks snap election to take UK through Brexit

Says everyone, including the FT, which adds things like The pound rose on expectations that Mrs May would win a much increased Commons majority, allowing her to sideline implacable Eurosceptics in her Conservative party and ensure a phased Brexit concluding with a UK/EU free-trade deal. Polls predict a heavy defeat for the opposition Labour party, which has been in disarray under the leadership of leftwinger Jeremy Corbyn. The Fixed-term Parliaments Act 2011 says she needs to lose a vote of confidence, or get 2/3 of parliament to agree; she will get the latter3 which means that no-one will be able to complain that she promised not to seek an early election, since everyone else at least officially wants one too1. Via Timmy I find current poll figures:

What will happen? Labour will do badly, obviously; though Corbyn, trapped in his deranged world, is obliged to welcome an early election. Their loss will presumably trigger a new leadership contest allowing Corbyn to go back to being the back-bencher he always was. But, by then it will be too late to have any influence on the course of Brexit. The UKIP, nominally well placed to benefit, are (as Timmy points out) in a pretty poor state having recently indulged in another round of self-inflicted wounds (and perhaps that helps explain the timing). The Lib Dems are the obvious home for anyone pro-European. But, but: at the moment it is hard to take them seriously. Perhaps they’ll manage to pull themselves together for the campaign and impress? That would be good2. And the Greens too.

And so, inevitably, the prediction is for a Tory win and increased majority. TM sez

We have also delivered on the mandate that we were handed by the referendum result. Britain is leaving the European Union and there can be no turning back. And as we look to the future, the Government has the right plan for negotiating our new relationship with Europe… That means we will regain control of our own money, our own laws and our own borders and we will be free to strike trade deals with old friends and new partners all around the world. This is the right approach, and it is in the national interest. But the other political parties oppose it… In recent weeks Labour has threatened to vote against the final agreement we reach with the European Union… And unelected members of the House of Lords have vowed to fight us every step of the way… Because what they are doing jeopardises the work we must do to prepare for Brexit at home and it weakens the government’s negotiating position in Europe… So we need a general election and we need one now, because we have at this moment a one-off chance to get this done while the European Union agrees its negotiating position and before the detailed talks begin.

Which is all fairly believable and will definitely Do. It is clear what strategy she has decided on. Quite how this can be reconciled with her pre-referendum weak-pro-remain stance I don’t know; perhaps she is just as much of an opportunist as Boris, but more competent; probably that question doesn’t matter.

I’m still very doubtful that the idiots on our side will be capable of talking to the idiots on the EU side and stitching up a useful deal within two years; given EU speeds, this seems implausible. So the most likely outcome must be exit with no deal, but then again there’s always the British muddle-through and the Euro-fudge, so who knows?

Anyway, it is clear that I have nothing beyond the obvious to say on the subject, so feel free to add your more valuable thoughts.

As played by Neil Young. Well it was all terribly exciting, wasn’t it? At least briefly. With a brief reprise. I’m looking forward to the third act in North Korea. Slightly more seriously: I think he has lucked out on this particular one or two, which (I’m prepared to be generous and guess, accidentally) serves as a useful distraction from his previous failures.

What about the Frogs?

The idiots in the villages have voted themselves a dictator. Shades of the Commies.

1. Various people – such as the NS – will point out that she said, though not very firmly, that she wouldn’t call an early election. This will not gain any traction, because she is a pol, and no-one expects pols to keep to their promises, especially when expressed as weakly as she did.

2. As the Lib Dems themselves say, we will seize this chance. In any general election air war, the media want two sides. And, far more importantly, the voters want a real choice. They will be presented with three other parties all offering the same, pro-Brexit message… We will be the only party calling to keep Britain in the single market.

* The Crucible of the Application Process by Dillon Bowen

18 thoughts on “The politics edition”