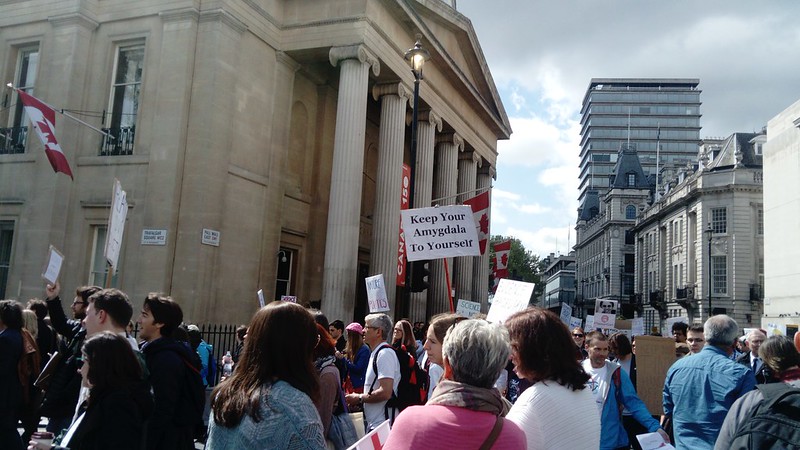 I didn’t march for science; I was busy running the Head of the Cam (in something of a turn-up for the books, Nines won, in only a tiny fraction over 9 mins, a good time; Jesus were three seconds slower and in a welcome return to form Caius were only a second slower than that; it promises well for the summer). But my daughter went down to London for other reasons and got caught up which is where my pic comes from. But what am I to think of it all? Being English, and generally rather curmudgeonly, I can hardly be enthusiastic; but I can’t bring myself to be quite on RS’s side. I think maybe ATTP’s take suits me. Or, as usual, I’m happy to go with Gavin. The https://www.marchforscience.com/mission/ seems supportable enough: The March for Science champions robustly funded and publicly communicated science as a pillar of human freedom and prosperity. We unite as a diverse, nonpartisan group to call for science that upholds the common good and for political leaders and policy makers to enact evidence based policies in the public interest. The last clause is slightly iffy though.

Why is it iffy? Well, if you ask the economists, they will tell you that the most economically efficient solution to CO2 emissions is a carbon tax. There’s a consensus on it, roughly as strong as the scientific consensus on GW. But the Obama adminstration was no closer that the Trump one to imposing a carbon tax. And yet no-one marched for it against Obama. Why not? Well, I think because “evidence based policies in the public interest” doesn’t quite mean the noble sentiments it pretends to; it’s actually code for “policies that we like”. And you don’t have to look too hard to see a party political theme: as the Graun says: many protesters excoriated the president with signs that likened him to a dangerous orange toxin or disparaged his now defunct university. Or try this pic from the Graun’s best-ten gallery. I know, I carefully selected it.

But everyone is blogging the MFS, mostly better than me. Instead, let’s broaden the topic to the Crisis of Western Civ(ilisation) by David Brooks (who he? Incidentally, I am unable to understand how anyone bemoaning the downfall of civilisation could possibly write it as “Civ”, unless he is thinking of Sid Meier, which seems unlikely; or is an unusually self-conscious barbarian). What somewhat surprises me is that this is news. People have been bemoaning the downfall of Western Civilisation since forever, but perhaps they do now have a point. We have got grossly fat, as a civilisation. Here’s a recent example, from CIP. We’re too rich. We can afford to make too many mistakes. The vital error-correcting function of natural selection – killing off stupid ideas – doesn’t function well any more. People can afford to vote for a bozo like Trump, because meh we’ll survive somehow. The idiot village Turks vote themselves a dictator. But I’m distracting myself, the people I’m worrying about are the intellectuals. It isn’t quite that they’ve lost faith in the Liberal project; it’s just that they take it too much for granted, assume it is so strong that they can piss around. Have you read “The Road to Serfdom”?

Looking at wiki’s page on evidence based policy it is clearly very thin indeed. Most of the text seems to be based around overseas aid, rather than applications to “home” policy. It seems to have been used as a buzzword by the Blair govt; but did they pass the test? Clearly not: the Iraq war was the antithesis of evidence-based policy, policy-based evidence. There’s a brief nod to the Australian tariff board which is odd, I think, because I don’t see them recommending zero tariffs.

Update: Why I marched for science by Jon Butterworth

One reason I think this march is needed is because there is a worrying trend at the moment toward isolationism and nationalism… Science and international collaboration are what we need to survive; to avoid killing ourselves, or each other, by accident or on purpose… But there is a danger than it leads to science being ignored, or taken for granted. That’s another reason today’s march is a good thing.Science will not make moral and political choices for us, or tell us what our goals should be.

This is a much smaller, but much more defensible, set of claims.

* The ice stupas of Ladakh: solving water crisis in the high desert of Himalaya
* Best #MarchforScience Posters – QS
* Abbott’s Stents In India – Price Caps Mean Products Disappear From The Market – Timmy
* Why March for Science? Because when it is attacked, only the elite benefit by Lucky Tran in the Graun is crap. You can’t substitute passion for thought. That’s what Trump is doing.
* Bart is in favour
* Brian in San Francisco
* We want to clear up a few things about what the March for Science stands for – mission creep; courtest of RS
* CIP

34 thoughts on “Marching for science?”