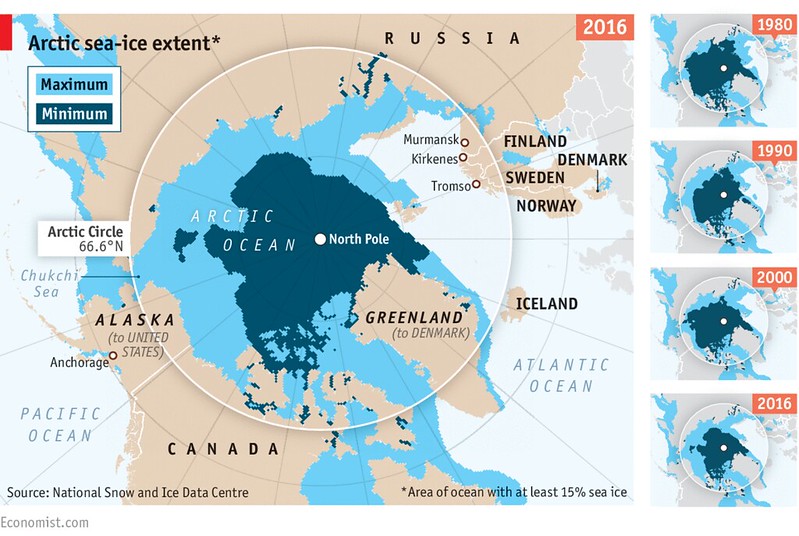 Economist watch: Farewell to the Arctic is one of the headlines on the front cover of the April 29th edition, and The Arctic as it is known today is almost certainly gone is one of the leaders. Which is sort-of nice, to see it so prominently and starkly.

THOSE who doubt the power of human beings to change Earth’s climate should look to the Arctic, and shiver. There is no need to pore over records of temperatures and atmospheric carbon-dioxide concentrations. The process is starkly visible in the shrinkage of the ice that covers the Arctic ocean. In the past 30 years, the minimum coverage of summer ice has fallen by half; its volume has fallen by three-quarters. On current trends, the Arctic ocean will be largely ice-free in summer by 2040.

The pic is nicked from yet another article, The decline of Arctic sea ice. In which I find

OVER the past three decades the area of sea ice in the Arctic has fallen by more than half and its volume has plummeted by three-quarters. So says a report “Snow, Water, Ice, Permafrost in the Arctic” (SWIPA), produced under the auspices of the Arctic Council, a scientific-policy club for the eight countries with territory in the Arctic Circle, as well as observers including China and India. SWIPA estimates that the Arctic will be free of sea ice in the summer by 2040. Scientists previously suggested this would not occur until 2070.

You just knew I was going to quibble that 2040, didn’t you? I think we need to look at www.amap.no/swipa2017. When I first checked an hour or two ago it appeared to be f*ck*d so here’s an archive since it’s now working. Who are these people and why have I never heard of them? Wiki hasn’t either, and the urban dictionary is at best a rough guide. I guess we want the SPM from which:

The Snow, Water, Ice and Permafrost in the Arctic (SWIPA) assessment is a periodic update to the Arctic Climate Impact Assessment, published in 2005 by the Arctic Monitoring and Assessment Programme (AMAP), the Conservation of Arctic Flora and Fauna (CAFF), and the International Arctic Science Committee (IASC). SWIPA focuses on changes to the Arctic cryosphere (the portion of Arctic land and water that is seasonally or perennially frozen), and the implications of those changes. The first SWIPA assessment was conducted between 2008 and 2010, and was published in 2011.

Aanyway, unlike the IPCC SPM’s the SWIPA SPM doesn’t reference it’s statements back to where they come from, so it’s no use to me. Oh, but The results of the SWIPA assessment are presented in reports, targetting different audiences. The results of the 2017 SWIPA assessment are currently available in a Summary for Policy-Makers and series of Fact Sheets. The detailed technical background that is the basis for the other reports will be availble [sic] in the summaer [sic] of 2017. That’s just a touch disappointing, and I’m not referring to their inability to speak English, which I’ll forgive since I can’t manage a word of Norge. The fact sheets are empty.

Well, without something to back up the 2040 claim you can colour me unconvinced for the while.

23 thoughts on “Economist: Farewell to the Arctic”