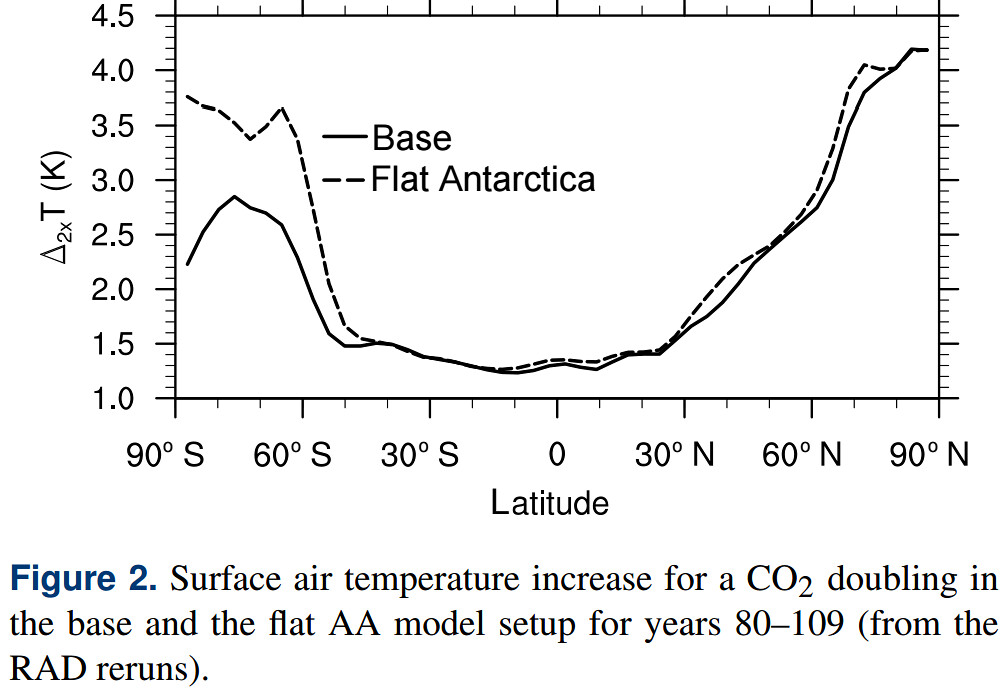 I apologise for breaking into the stream of politics for some science: Temperatures in the Arctic are increasing around three times as fast as the global average, yet the pace of warming has been much slower at Earth’s other pole. A new study, just published in Earth System Dynamics, suggests the difference might – in part – be down to the great heights of Antarctica’s land surface. The article is The polar amplification asymmetry: role of Antarctic surface height by Marc Salzmann. And since it’s open-access I’m sure they won’t mind me copying from their abstract:

Previous studies have attributed an overall weaker (or slower) polar amplification in Antarctica compared to the Arctic to a weaker Antarctic surface albedo feedback and also to more efficient ocean heat uptake in the Southern Ocean in combination with Antarctic ozone depletion. Here, the role of the Antarctic surface height for meridional heat transport and local radiative feedbacks, including the surface albedo feedback, was investigated based on CO2-doubling experiments in a low-resolution coupled climate model. When Antarctica was assumed to be flat, the north–south asymmetry of the zonal mean top of the atmosphere radiation budget was notably reduced… between 24 and 80%… of the polar amplification asymmetry was explained by the difference in surface height, but… might to some extent also depend on model uncertainties.

So there you go. I’ll assume you’ve read the (open access) paper. And you get the idea from the image I’ve cut-n-pasted: under 2xCO24, the Arctic is hardly affected by flattening Antarctica but Antarctica warms much more. However, although this isn’t unbelievable, it kinda goes against what I thought I knew – which is to say, the conventional explanation that they quote -, so I should look for some flaw in it. As should you! Don’t take anything for granted. Ideally you’d do that by carefully reading the paper and pondering it’s arguements, but life is too short so I’ll leave that to you; I’ll just do some drive-bys1. 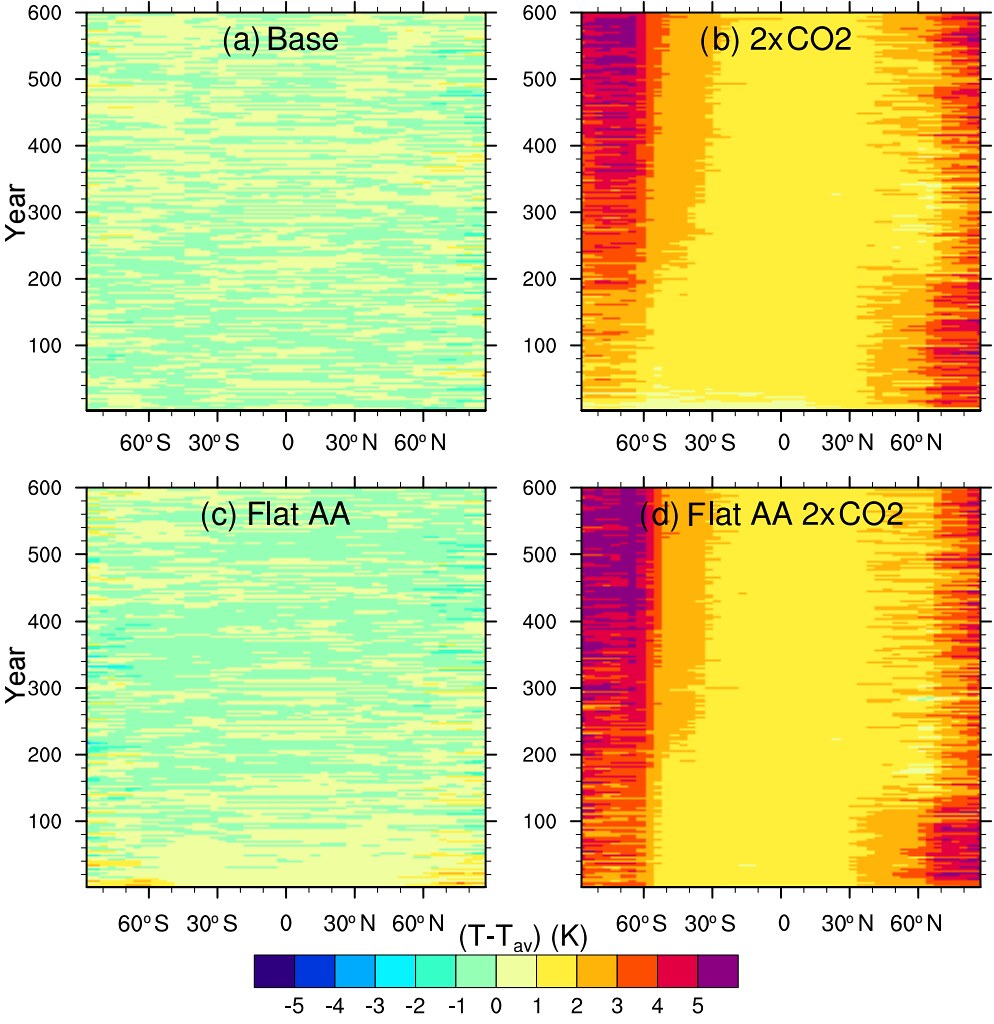 As the abstract hints, this is not a sooper-dooper hi-rez model, and they give some evidence of not fully trusting it. I’m not going to quibble any details, but see this second pic I’ve inlined. It is the zonal average response, over 600 years vertical time. And you’ll see two odd things. One in the control runs, which I’ll come back to in a moment, and the second in the 2xCO2 runs.

And that is, that the warming in the Antarctic is greater than the warming in the Arctic by about the time of, oh, year 130. By bizarre chance, the first inlined pic is from years 80-109. Had they drawn the same pic for year 570-599, it would have looked very different and (dare I say) rather less convincing. Their explanation for this is THC shutdown, which as they say simpler models are rather more prone to. Well actually they say The weaker Arctic warming in the middle of the 2 × CO2 base run (Fig. 13b) is an indication of a slowing of the ocean’s meridional overturning circulation (MOC). Such a slowdown has often been found in CO2 perturbation experiments, and it tended to be stronger in low-resolution, low-complexity models compared to state-of-the-art highresolution models. Since the CESM was run at a low resolution in this study, this finding should also not be overinterpreted. From that I deduce that they didn’t carefully look through all the diagnostics to verify MOC slowdown, but it’s a reasonable guess. Anyway, the point that MS doesn’t then link to is the polar see-saw (that’s my pic!) and it would be natural to suppose that a (relative) Arctic cooling would lead to Antarctic warming. And it is possible (though I admit to not having fully joined the dots) that this is (part of) their enhanced Antarctic warming.

You might also wonder about the spin-up. Coupled models generally require some, and it looks like MS was a bit careless in this regard: It should be noted that Antarctic warming relative to the respective control run (Fig. 14a) was stronger in the flat AA than in the base model setup throughout almost the entire 600-year period. However, even though the temperature in the flat AA control run stabilized after a moderate initial warming and even though the temperature evolution from the control run was subtracted in this analysis, it cannot be completely ruled out that this moderate initial warming could have also played a role in the later development in the 2 × CO2 flat AA run. Therefore, in retrospect2, starting the flat AA 2 × CO2 run from a separate long flat AA spinup run and prescribing a more realistic gradual increase of the CO2 concentration, which would allow the inspection of the first decades of the CO2 perturbation experiments, would have been better.

The last point, which I’ve now come back to, is that despite the “even though the temperature in the flat AA control run stabilized after a moderate initial warming”, I can’t see it. You’d expect some decades of warming in the Antarctic in the control run as heat is advected in as the continent is suddenly flattened. But no; at least, as I say, I can’t see it.

Anyway, there you go. I enjoyed writing that. Rip me to shreds3.

1. At one point, we had a policy against drive-by reviews. Because the thick-as-pigshit management thought that having problems with your code pointed out by people who were too busy to review all your code was bad, because the darling snowflakes sometimes got offended.

2. I read that “in retrospect” as “bollocks, the referees noticed it”.

3. In memory of the Rude Mechanicals

4. Note: these are instantaneous-doubling CO2 experiments, which I thought had largely gone out of fashion, as they are somewhat less realistic that the steady-increase type.