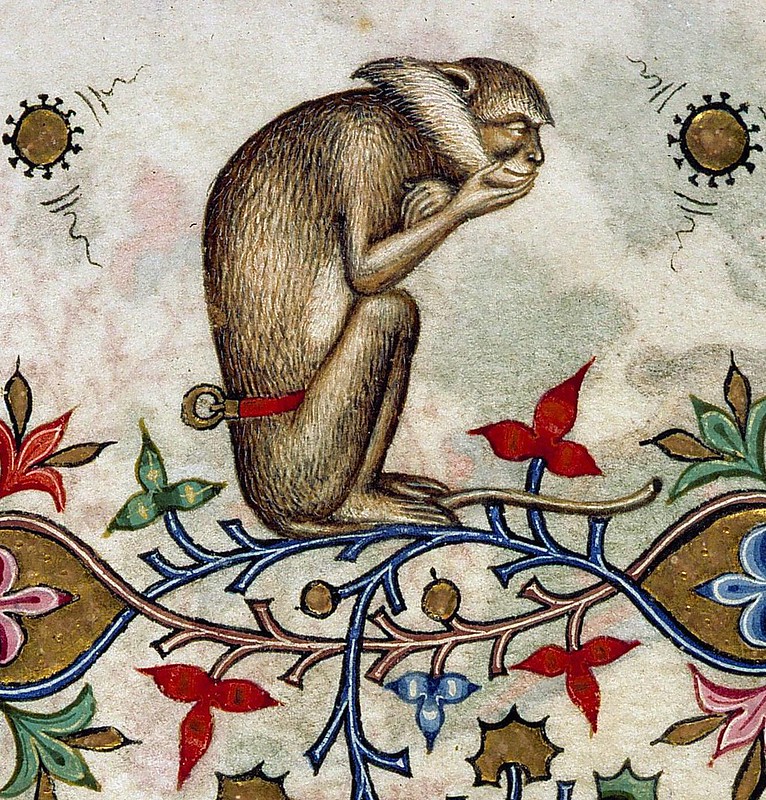 In the politics edition I made some amazingly prescient comments that now appear somewhat dated. Not quite definitively wrong4 – next week will seal that – but before the election itself it will be fun to write down what I think to see how it stacks up against what happens.

Less than two months ago I said What will happen? Labour will do badly, obviously and I don’t see anyone disagreeing with that, then. Now we have the Torygraph saying stuff like Labour continue to narrow the gap on the Conservatives, with the General Election’s latest polls and odds showing that Theresa May may not actually win many more seats and so on, and suddenly it isn’t very funny any more (I’m all for the Tories not doing well, but I’m aghast that my fellow countryfolk are mad enough to support Labour under Jeremy Corbyn. Shameless bribery of the electorate is back, it seems).

What has led to this odd turnabout? Any number of things I suppose; partly the aforementioned shameless bribery (the Labour manifesto was widely decried1 as the manifesto of a party that didn’t expect to have to implement it so was happy to promise everyone everything) but mostly the Tories being a shambles. Theresa May looks every day more and more like some dull pol who accidentally fell into the top job after shamelessly throwing her convictions away, but who can’t handle it.

Here’s a picture of some polls, taken from the Economist but I warn you, if you feel too cheered up by that, try clicking on the “just show how the old will vote” button and them remember that more of them do than the idiot young. 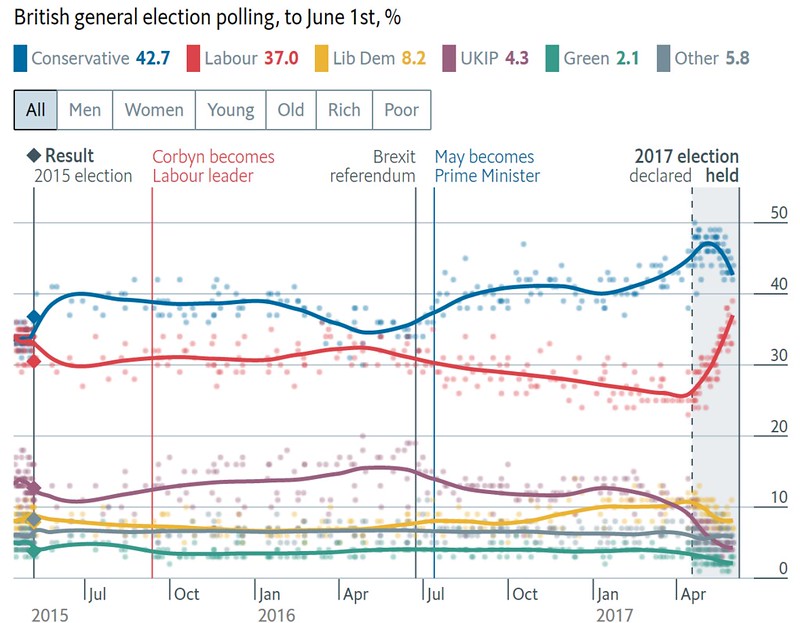 Speaking of TE, I notice that they endorse the LibDems for this election, and their summary of why is The leaders of both main parties have turned away from a decades-old vision of an open, liberal country.

Nice pic. Let’s quote some of their stuff: Mr Corbyn poses as a radical but is the most conservative—and the most dangerous—candidate of the lot. He wants to take the railways, water and postal service back into public ownership. He would resurrect collective pay-bargaining and raise the minimum wage to the point where 60% of young workers’ salaries are set by the state. His tax plan takes aim at high earners and firms, who would behave in ways his costings ignore. University would be free, as it was until the 1990s—a vast subsidy for the middle class and a blow to the poor. Yup.

But what about the Tories? The Tories would be much better than Labour. But they, too, would raise the drawbridge. Mrs May plans to leave the EU’s single market… she insists on cutting net migration by nearly two-thirds… she will not meet the target without starving the economy of the skills it needs to prosper—something she ought to know, having missed it for six years as home secretary. Her illiberal instincts go beyond her suspicion of globally footloose “citizens of nowhere”. Like Mr Corbyn she proposes new rights for workers, without considering that it would make firms less likely to hire them in the first place. She wants to make it harder for foreign companies to buy British ones. Her woolly “industrial strategy” seems to involve picking favoured industries and firms… She has even adopted Labour’s “Marxist” policy of energy-price caps… She wanted the election campaign to establish her as a “strong and stable” prime minister. It has done the opposite… the centrepiece of her manifesto, a plan to make the elderly pay more for social care, was reversed after just four days… It does not bode well for the Brexit talks. A campaign meant to cement her authority feels like one in which she has been found out. So, she’s rubbish, but less rubbish that Corbyn. Yup.

And the LibDems? It is a dismal choice for this newspaper, which sees little evidence of our classical, free-market liberal values in either of the main parties… No party passes with flying colours. But the closest is the Liberal Democrats… They are more honest than the Tories about the need to raise taxes for public services; and more sensible than Labour, spreading the burden rather than leaning only on high-earners. Unlike Labour they would reverse the Tories’ most regressive welfare cuts. They are on the right side of other issues: for devolution of power from London, reform of the voting system and the House of Lords, and regulation of markets for drugs and sex. Yup.

If I was in the Cambridge ward, I’d vote LibDem3. But I’m in South Cambs, which is inevitably Tory, so I’ll probably vote Green instead.

Our dear PM is probably regretting calling the election now. I rather regret that she so casually threw away the 5-year-fixed-term-parliaments act. It was weak, true, but had it been allowed to bed in it might have become a tradition, and stronger. Now it is gone.

The most likely result is a Tory victory with a (perhaps marginally) increased majority. But that would be dull, so why not speculate? A possible result is a hung parliament with – if my fellow electorate are not too foolish – the possibility of a Tory-LibDem coalition having a majority. Of course the obvious objection to that is that the LibDems got badly burned last time, why would they wish to try again? And the obvious answer would be that they’d have to be given something they really want. Which could be, some variant on a second referendum on Brexit2. Done baldly it might not work but more subtly as “a referendum on a deal, in good time to patch things up if there is no deal” might do it. Of course some Tories and all the Kippers would go apeshit, so it would be worth it just to see that, but it might make it rather hard to stitch together.

1. By the cognoscenti, of course. The hoi polloi don’t seem to have been given the sekrit decoder ring.

2. If I believe the Graun, the LibDems have ruled that out. If they have, they’re idiots. Fortunately there is enough ambiguity in the quotes words to give them wiggle room.

3. So after some reflection and whilst trying to find out if 2 is true or not, I decided to bung them some money.

4. I do rather regret my Which is all fairly believable and will definitely Do… perhaps she is just as much of an opportunist as Boris, but more competent; probably that question doesn’t matter. As time has passed I think it has become obvious that her ability to make vaguely convincing speeches is combined with an inability to make sensible decisions or even to think clearly; I wouldn’t call her competent now, not even by comparison with Boris.