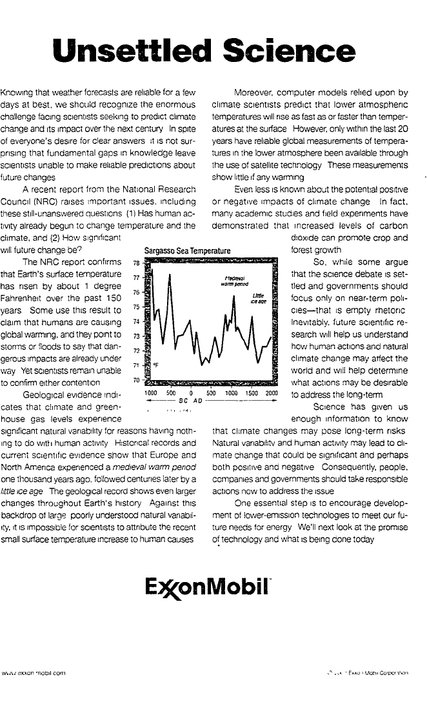 Schlock, horreur: Exxon funds science. Yes, we knew that already. More schlock and awww: ExxonMobil deliberately attempts to sow doubt on the reality and urgency of climate change. Yes, we knew that too. This is all kicked off by Oreskes astonishing ability to re-tread the same story again and again; but clearly there’s a big constituency out there that wants to hear it; so if she can make a fine living out of telling the same old fairy story I suppose as a good free marketeer I can’t complain too much.

Before we go on, notice the image I inline. It is part of the evidence against Exxon. It’s a misleading advert, that appeared in the NY Times in 2000. Obviously, Exxon produced the advert, and are therefore responsible for it. But the NYT published it. Are they not at least a teensy bit responsible? Are they not guilty of misleading the public? They certainly don’t seem to feel at all responsible. Their “discussion” of that problem consists only of The Times’s policy on accepting such advertising can be found here. But, oh dear, if you read the policy you find a section on “In general, advertisements in the following categories are unacceptable” whose very first item is “Ads that are misleading inaccurate or fraudulent”. So what happened? The advertorial can certainly be considered misleading; that’s Oreskes point. Perhaps, in 2000, it wasn’t obviously so? But if that were the case Oreskes case collapses. In fact the answer is all too obvious: Exxon paid good money for it, the NYT likes money just like everyone else, there’s a free-speech case, and anyway by 2000 standards it isn’t too terrible1.

Meanwhile, poor Katharine Hayhoe is slightly embarrassed that she did (partly) Exxon funded science in 1995-1997. The science stuff there is all fine; she did something sane and Exxon didn’t try to push her politically and her Exxon full-time colleagues were all great; no surprises there. But what is surprising is Did I know what else they were up to at the time? I couldn’t even imagine it which I do not consider believable. I can find myself being not terribly happy about Exxon in 1997 (What I said about Exxon) and I’m pretty sure I could go back further if required. True, I had the advantage of parents in law (to be, at that point) who worked for Exxon (technically Esso I think, but y’know) who would show me Exxon shareholder reports with similar doubtiness in it. But could you be a scientist, working on climate science, for Exxon and not even notice their reputation? No, you couldn’t. So there’s some air-brushing of history going on there, just as the NYT is rather lightly glossing over their breaking their own advertising policy.

And this, I think, is the problem, as I’ve said so often before. It would be terribly nice if all the evil in the world were done by evil corporations, and all we needed to do to get everyone a pony was to make the evil corporations good, or to just abolish evil corporations. But the world is not like that. The people burning fossil fuels and emitting CO2 are not Exxon: they are you, me, Oreskes and Heyhoe; and similar others.

Meanwhile, to return to the original schlock, as even Oreskes accepts Exxon was producing fine public research on GW, even though she does her best to obscure this point. And although that public reasearch was not easily accessed by the general public, happily we had any number of public-spirited individuals and organisations keen to tell the world about GW, and even an intergovernmental organisation – the IPCC, you may have heard of it – tasked with collating and publishing suchlike.

1. Or is this their policy? I find it impossible to tell. Because after the “general” stuff there’s a “Advertising Acceptability Policy for Selected Categories” and in “Advocacy Advertising / Opinion Advertising” in which they say We believe that the broad principles of freedom of the press confer on us an obligation to keep our advertising columns open to all points of view. Therefore, The New York Times accepts advertisements in which groups or individuals comment on public or controversial issues. We make no judgments on an advertiser’s arguments, factual assertions or conclusions which gives them a free pass: if they make no judgements then their advertisers can lie themselves blue in the face and the NYT doesn’t give a toss. Fine; but then that rather destroys their high-minded insistence on truth.

16 thoughts on “I was a teenage Exxon-funded climate scientist?”