While I was away having fun in the mountains, I rudely ignored a number of comments on the blog that I’d normally answer. I could answer them in place, but if I did that now, no-one would notice, hence this post. Did I rudely ignore your fine comment here, too? Then tell me. But first, a picture: walking from La Berarde up towards the Pilatte hut. 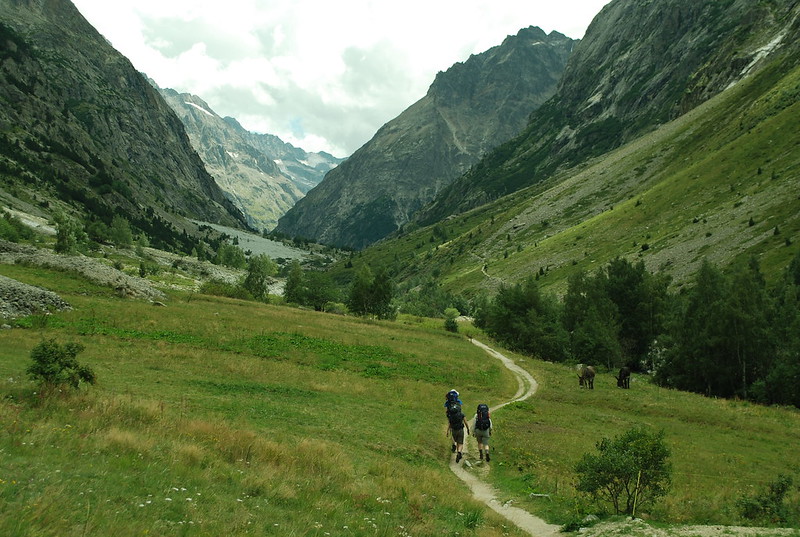 The rule of law

Q: When will we see ‘tailpipes’ on cars as morally wrong? An Earth Day question
http://www.greencarreports.com/news/1101015_when-will-we-start-to-see-tailpipes-on-cars-as-morally-wrong

The similarity to smoking ban in public places seems an obvious similarity to draw.
http://www.greencarreports.com/news/1112133_when-will-ads-for-cars-with-tailpipes-be-banned-as-health-hazards-poll-results

One difference between smoking and ICE cars is that it is cheaper and not essential to smoke, however electric cars are more expensive and some travel is essential. Consequently I can see reasons for such a movement not gaining much ground for the next couple of years. Fortunately it may not be much longer before electric cars are cheaper and then there is no reason for sales not to be banned in fairly short order along the same lines as smoking to protect innocent other people. Indeed Norway is already talking about banning ICE cars by 2025. If all countries did so, we might have difficulty in making enough electric cars by 2025. The more this is talked about, the more car companies will realise it is coming and prepare and the sooner it will be possible to put such a ban in place.

So morals should demand that we should talk about it to encourage it to become possible to put such a ban on sales of ICE cars in place sooner.

What is the libertarian counterargument? That we should be allowed to make decisions that deliberately harm other people?

A: Ha, you mistake me for an L theorist. I will attempt to guess an answer: they would likely say that the evidence for the public smoking ban (i.e. for damage from secondary smoke) was weak enough to not justify government action. Damage from cars definitely exists, and yet most of the population benefits, and almost all of the population that can afford a car, buys one; and hence are in a poor position to complain. My suspicion is that Electric will take rather longer to come in than some rosy estimates, so this problem will be around for a while yet.

And some more denial.

A: Meh. If you’re going to get excited by every dumb thing Trump does, you’re going to be permanently excited, which is bad for you. As for the committee, you have to get a long way down the article before you find The committee was established in 2015, but its members were not appointed until last summer. They convened their first meeting in the fall.

>How about the rest of the species on this planet? Not a single economy out there, let alone a discount rate.

This is what I don’t get: much of biology is made out of economies (there’s a whole discipline called Ecology for starters), and yet most economists seem to have zero idea about the fundamental set of relationships that pay the bills. By Pay The Bills, I mean a) provide oxygen for those of us who breath, b) feed all the humans on the planet, and c) provide livable environments/moderate climates.

I find it bizarre that ECOnomics is solely concerned with human financial relationships, while our unbelievably fantastic and generous Growth Economy continues to unsustainably eat away at both “our” biological capital and the very systems that provide food and oxygen. The dismal science indeed…

A: I have some sympathy for this viewpoint. As I’ve said many times in the past, it seems to me likely to be the major impact of GW, but very hard to quantify. That said, we’re not and won’t be short of oxygen, and current crop yields are increasing, not decreasing.

But economics!!! The company clearly got its money’s worth….

A: Meh. Retread; nothing new.

Somewhat higher up, coming down from Pilatte.