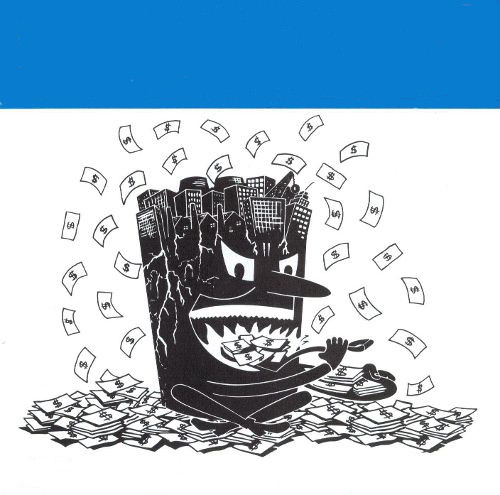 Those of you paying attention will have noticed several approving references here recently to Cafe Hayek, run by one Don Boudreaux (an American libertarian economist, author, professor…). For economics or law, I like it. For GW, it is regrettable; for example, he’s keen on George Will.

Aanyway, just recently he ventured into why he oppose[s] a Pigouvian tax on carbon emissions, and the results are unconvincing. Which is a shame, because I would have been interested in a coherent argument. Instead, we’re treated to an unconvincing analogy (calling for such a tax strikes me as being akin, say, to homeowners whose homes have been routinely vandalized calling on the vandals to vandalize also the factories that produce the spray paint, sledge hammers, and crow bars used by vandals), and an argument that essentially says “you can’t trust a govt, therefore all tax is bad” (I’m not totally opposed to him making such and argument, but then I can’t see why you’d restrict it to Pigouvian taxes; it would apply to all tax; but if his argument is all-tax-is-bad then he should say that, clearly). There is one bit that can be argued to make some sense (What good reason is there to believe that the same agency – the state – that has routinely distorted energy, and other, markets… will reliably implement and enforce such an optimal tax?) And indeed, it is rare to hear a discussion of carbon taxes that doesn’t rapidly veer off into “of course my favourite cause will not have to pay these taxes”. But meh; that’s just pols talking so isn’t a strong argument against any particular tax.

I commented. Naturally, I was too unimportant to be worth replying to (or, more optimistically, my arguments were irrefutable and so he made no attempt to defend his indefensible post). But Timmy also commented – and DB has approvingly quoted Timmy in the past – and this time DB did feel obliged to reply. But to me his reply is just mush.

[Update: DB has another go, but I think he is just repeating himself; there’s nothing new there. Notice, if you do visit, that the quote is somewhat misleading; they are trying to adduce the respected Coase to their side, but actually he has nothing to say on GW; the connection to GW is instead by the far less respectable Bailey.]

[Later update: and, sigh, also puffing nonsense like How the Debate on Climate Change Is Cooling Down, by Marian L. Tupy; as usual you’re better off reading RC. And he’s still going; and more.]

9 thoughts on “Talking with the taxman about carbon”