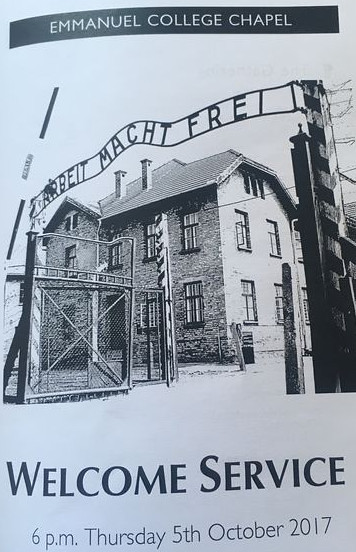 As the increasingly sparse readership of this blog will have noticed, I’m writeing less and less about science – science is hard, and increasingly GW science isn’t terribly interesting, whatever James may say – and becoming increasing interested in the fringes of politics and philosophy, in which any old fool can have an opinion, and usually does. But as a terrible warning to anyone feeling too clever, my image for this post is a “welcome” leaflet for Emma chapel, doubtless thought to be very deep by those who commissioned it, but felt to be less than tactful by many others.

Recently, gunz are all de rage (archive), because some nutter killed lots of people. And in the usual way of such things, killing lots of people in a newsworthy way gets you lots more attention than all the other people who kill people, including themselves, in rather less newsworthy ways.

Via The Mass Shootings Fix at FiveThirtyEight (which, irritatingly, appears undated. But from context is 2016) I get this pic, which tells me something I didn’t know, at least quantitatively, that mass killings are a tiny portion of the total, with single-death incidents approximately 90% of the total gun deaths in the USA. And so I say: if you’re pretending to take a principled stand, rather than just ghoulishly reacting to exciting horror, why be especially concerned now?

Enough of that, though. The question is “what to do about it”, which of course brings in the politics. The New Yorker, linked above, I take as representative of the “it is about time to do something about it” school of though, and it draws heavily on the idea that there is popular support for Something Must Be Done1. And at that point I leave gunz for the moment, since it was only an example, and wish to consider the more general point: if a majority of people want something in a democracy, should they get it?2 The New Yorker pretty well takes it as read that all Right Thinking People will agree without discussion. This is, I believe, commonly called majoritarianism. It is not without flaws. It didn’t go well in Egypt under Morsi; and in general the idea that because you’ve won the election, you can do what you like, infects many African democracies. In the UK the regular counter-example is that the public would bring back hanging if it could; or you could use Brexit if you liked. But the UK doesn’t have a constitution, parliament is supreme; so let’s turn to the USA which is after all where we started, and which provides the example of Jim Crow. Which for those like me unfamiliar with your funny ways, were racist laws passed by democratic majorities, and eventually struck down by the courts for violating the constitution.

Which brings me to Constitutionalism, which is effectively “majoritarianism, but bound by a constitution”. If you think that a democracy should have the right to pass racist “Jim Crow” type laws if only the majority wants it, then you can reject constitutionalism with a clear conscience. But if you think the laws are bound by the constitution when it says things that you like, but not when it says things that you don’t, then you don’t have a coherent position (unless you want me to believe that “the law should do whatever I want it to” counts as coherent; but I don’t).

From here we pass to the yet-more-general question of how would you design the laws for a state, if you and your descendants have to live in it? In general this isn’t done; states just grow; but there is one particularly important example of this, which is the founding of the USA. And I am no constitutional historian, obviously, but it seems clear enough to me that your3 founders did deliberately choose to put restrictions on the majority4.

And from there we return to the start: specifically, the vexed question of the “militia clause”; or more generally, the problem of interpreting your constitution. Here we see the wisdom of Hobbes’s view, that the sovereign must be judge in all cases, because if it isn’t, then whoever is judge is effectively sovereign. Which is perhaps pushing it too far; but obviously the “militia clause” can either be neglected entirely – as it is at the moment – or ruled to be vital, effectively removing the protection of the constitution on the right to “bear arms”, however “arms” might be interpreted5. Or then again, there is the ringing declaration of independence, all men are created equal, that they are endowed by their Creator with certain unalienable Rights, that among these are Life, Liberty and the pursuit of Happiness that was somehow interpreted as compatible with slavery.

Anyway, there you go. Obviously, I’m in favour of constitutionalism; majoritarianism is for demagogues.

2. Recalling of course Democracy is the theory that the common people know what they want, and deserve to get it good and hard.

3. You understand that, for dramatic effect, I speak as though to one of these colonials.

4. The recent sad case of Trump being elected despite losing the popular vote is another possible example.

5. You didn’t want me to express an opinion as to which is correct, did you? I’d go for “the commas render the entire sentence non-grammatical and therefore void”.

26 thoughts on “Gunz: constitutionalism and majoritarianism”