But he isn’t a tosser. I’m sure he’ll be glad to know that.

Which Mullah do I mean? I mean Richard Muller (who has one of the worst-looking websites in the known universe, beaten only in my personal experience by TimeCube and (of course) Lubos). Muller is running the Berkeley Earth Surface Temperature (BEST, geeddit?) project. By now you’ll have guessed I’m a bit cynical about all this, but don’t give up on me yet, I’ll not trouble you with any of the funding stuff, Eli is good for snark and mt has some good stuff too and Tamino pokes gentle fun.

Anyway, the back story (which I can’t be bothered to document) was that Muller, known for his contrarian views on GW {{cn}}, got funding to do a re-analysis of the instrumental temperature record. Everyone who was anyone (scientifically) knew that if he did it honestly he’d get the same answer as HadCRU, GISS, and anyone else who ever did it honestly {{cn}}. But the niggling question was, of course, in that case why bother do it? Apart from the fame and the money, of course. And while he had some good people on his team (Rohde) he also had some wackos (Curry). And the wackos were puffing him up no end.

But the interim result (his congressional testimony) is dull: groundbreaking work along the lines of:

Our results are shown in
the Figure; we see a global warming trend that is very similar to that previously reported
by the other groups. We have also studied station quality. Many US stations have low quality rankings according to a study led by Anthony Watts. However, we find that the warming seen in the “poor” stations is virtually indistinguishable from that seen in the “good” stations.

and consensus-busting assessments along the lines of:

Prior groups at NOAA, NASA, and in the UK (HadCRU) estimate about a 1.2 degree C land temperature rise from the early 1900s to the present. This 1.2 degree rise is what we call global warming. Their work is excellent, and the Berkeley Earth project strives to build on it.

(my bold, put in there because some people missed it).

So, in outline, whenever he has been confronted by real results, Muller has managed to get the right answer, just like everyone else. Well done that man! (though, as WE points out, the 1.2 oC is a bit dodgy.

Why then is he rubbish?

Because he is still basically clueless about climate science. The continuation of his quote just above is:

Human caused global warming is somewhat smaller. According to the most recent IPCC report (2007), the human component became apparent only after 1957, and it amounts to “most” of the 0.7 degree rise since then. Let’s assume the human-caused
warming is 0.6 degrees.

I think he is getting this from the AR4 SPM, which indeed says Most of the observed increase in global average temperatures since the mid-20th century is very likely due to the observed increase in anthropogenic greenhouse gas concentrations though I’m not sure where he gets 1957 from. This is infelicitous phrasing from the IPCC, but the real answer is just a few lines lower and is more explicit: It is likely that increases in greenhouse gas concentrations alone would have caused more warming than observed because volcanic and anthropogenic aerosols have offset some warming that would otherwise have taken place. And indeed, you can see that from the figure just below the text that Muller is (presumably) paraphrasing, that natural forcing since 1950 is slightly downward.

So Muller hasn’t bothered to read the IPCC report, or even talk to Rohde, which is a bit more worrying. Presumably due to physics-arrogance (the existence of which I’ve always found bizarre. When I was at university, the mathematicians looked down on the physicists :-). And because of that he goes on to make up his own numbers “Let’s assume the human-caused warming is 0.6 degrees”, which he then goes on to use in order to boost his own funding “The magnitude of this temperature rise is a key scientific and public policy concern. A 0.2 degree uncertainty puts the human component between 0.4 and 0.8 degrees – a factor of two uncertainty. Policy depends on this number. It needs to be improved.”

About the only point of all this would be for the septics and denialists to be finally convinced because “one of their own” has done it. But of course they are just going to disown him instead, so it appears to be a complete waste of time. Perhaps the more rational skeptics-with-a-k might listen, though. Anyone got any evidence that they are?

ps: It is a bit of a shame the Muller is going public with all this before publications or indeed the famed open-source code he intends to produce is actually available. Quite whose fault that is I don’t know. I’m sure Muller will be able to blame the congress-critters if he wants to.

[Update. There is a bit more of Muller showing that he is rubbish in a transcript of a radio interview NPR, April 11, 2011. Lets look at some bits: CONAN: And is it accurate to describe you as a climate change skeptic? Prof. MULLER: I don’t think so. I’m just a scientist. People want to pigeonhole everybody in this field just to simplify the argument… (etc)… So, Muller objects to being in the Skeptic camp. Indeed, he objects to the pigeon holing. But only when it is him being pigeon-holed, because we continue with CONAN: …the suggestion that some of your colleagues, who might be described as warmists, were cherry-picking their data… at which point Muller makes no objection to use of “warmists”.

And as for Anthony Watts… I regard him as a hero in this business. – don’t make me vomit.]

David Appell has a rather dramatic graph: 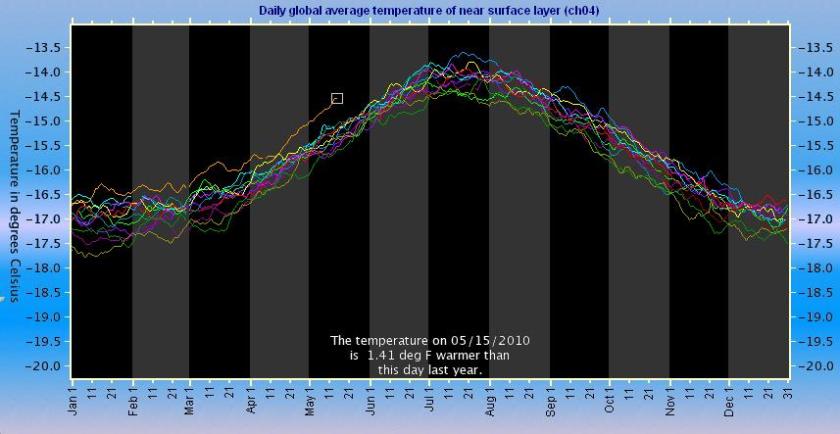 It is from Roy Spencer. As DA says: I’m sure those skeptics who pored over every detail of the sea ice this winter will be touting this picture soon :-).

[Update: BCL points me to http://bigcitylib.blogspot.com/2009/07/pielke-sr-respnds.html which again suggests problems with UAH. Well, we all know we should use RSS anyway. Hopefully they will provide the funky interface