This has so many shades of “Chinese academy endorses NIPCC report”. The back story: Lennart Bengtsson, sounding somewhere between very naive and emeritus, joins the GWPF, talking the usual nonsense (I believe most serious scientists are sceptics) indicating that either he really doesn’t know what’s going on, or is deliberately obfusticating. Now, it seems, his various respectable colleagues have pointed out his silliness to him. So he’s ditching the GWPF, because he doesn’t want to be an outcast. But he hasn’t got the grace to admit the foul-up is all his error.

Update: watching the wackos on this one is fun. There ought to be a prize for the most over-the-top Godwinism. So far the clear winner by quite a margin is NTZ with the gloriously hyperbolic Boko Haram Science…Thought-Tyranny, Vicious Hounding Shame, Blacken Climate Science Community. LB himself manages a merely silly It is a situation that reminds me about the time of McCarthy. AW is dull; RP Jr is merely a tosser again, sigh.

Update: whilst LB has clearly gone off the rails wrt the GWPF, I should point out that he has a genuine solid scientific reputation; see his page at U Reading for example. And he has genuine recent publications in respectable journals as well. I went to ECMWF for their meteorology course for a month or two in ?1991? when I first joined BAS; he had just left as Director of ECMWF then, for MPI. His first publication was the year I was conceived.

Late update: Olle Häggström has a good background article on LB, available to anyone capable of speaking Foreign, or pressing the “translate” button in Chrome. Or, its up at Eli’s.

Well, for the moment anyway: 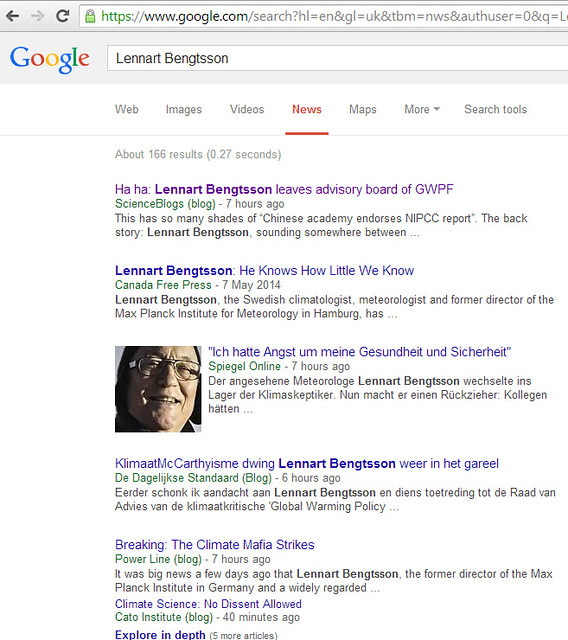 Its interesting to ponder why LB has gone off the rails.

In they Are Mad As Hell And Not Going to Take it Anymore, Eli links to some (translated, thank heavens) Swedish provided by MW (originally here, thanks, but I got busy) wherein LB says:

I surely do not imagine our romantic green Communists want a one-way ticket to North Korea. But if interested I will gladly contribute to the trip as long as it concerns a one way exit.

This rather hints towards right-wing views, which would fit neatly in with the GWPF. I provide my own speculation in answer to comment 56 below. Oh yeah, and I wrote something in my post above, too 🙂

DA also wonders. OH, in the comments notes that LB can appear a touch over-sensitive, which makes me wonder, again, whether his emails are entirely accurate.

Update: the Paper of Death

News about Lennart Bengtsson’s paper. It looks as though he may have been just a touch economical with the truth. Shades of Lindzen, Spencer et all to wearily al.: old folk who just can’t accept that sometimes, peer reviewers are right.

* Statement from IOP Publishing on story in The Times.
* Eli.
* expert reaction to claims climate research was ‘suppressed’ including LB (via QS)

The second referee is now available (see Eli and its now even worse for LB.