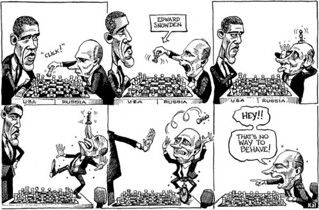 Following up on my brilliantly prescient Foundation and Empire from April, the current economic situation in Russia is worth commenting on. The Russian rouble [is] in free-fall despite [a] shock 17% rate rise says Auntie (and she really does, doesn’t she, which is silly: rates rose to 17%, not by 17%), and Timmy has some notes about 17% interest rates.

(Its not quite the right cartoon, obviously, but it does show the fundamental silliness of Putin well.)

The acute problems with the Rouble stem from the oil price fall, of course, and not Western sanctions (The Graun thinks otherwise, but I wouldn’t trust them on finance; Timmy also suggests otherwise, but I think he’s being slightly over-cute). Their longer-term problems stem from them being an unreformed economy propped up by oil; and Putin bears a lot of responsibility for that lack of reform – as, of course, do the bozo Russkie electorate who keep re-electing him, bribed with their own money, the idiots. But I’ll certainly hope that sanctions are making a bad situation worse. All this leads to wild paranoia amongst the nuttier Russkies.

However, its quite hard to see a good way out of this. Well, I can see one: Putin says “oh, rats, its all going horribly wrong. I’ll pull all my troops out of Eastern Ukraine (and Crimea!?), stop propping up the bandits, and give up the hopeless yearning for the return of the Evil Empire. And reform the Russian economy and political system”. In return for which the West removes sanctions, and leans on the Saudis to cut production, and we all waltz off into the sunset holding hands. The trouble is, I can’t really believe it. [CIP provides a slightly more believable and far less pleasant scenario.]

Incidentally, I’ve seen several “ZOMG! What are we going to do now that oil is $45 a barrel” type posts{{cn}}. But this isn’t going to last. Its just the Saudis making a doomed attempt to knock out the frackers. Prices will go back up, though perhaps not to a level high enough to prop up the Russkies – who are not the only people in trouble with oil at this price.

[Update: nice article from Krugman. Who makes one interesting point: the Russian current account balance… has been in consistent large surplus, with a cumulative surplus of more than $900 billion. Russia should not be a debtor country. It has managed this nonetheless, presumably because corporations and banks have borrowed abroad, and somehow that money has ended up invested in luxury London real estate and other things. Which is yet another way of saying this is down to the twisted nature of Russian politics.]

* The Economist on how the crony system in Russia insulates people in power. But only to a certain extent.
* Goodbye, Rouble Tuesday – FT
* Putin’s Racket by CIP