An interesting paper in Nature Communications (David B. Kemp, Kilian Eichenseer and Wolfgang Kiessling, doi:10.1038/ncomms9890), and yet oddly unreported, or at least not in the corner of the blogosphere that I watch (did I miss you? Sorry, tell me). True, its not easy to interpret, but even so I’m surprised. I was hoping that someone was going to tell me what to think, but until they do here’s what I’ve thunk for myself. Let’s start with their abstract:

Recently observed rates of environmental change are typically much higher than those inferred for the geological past. At the same time, the magnitudes of ancient changes were often substantially greater than those established in recent history. The most pertinent disparity, however, between recent and geological rates is the timespan over which the rates are measured, which typically differ by several orders of magnitude. Here we show that rates of marked temperature changes inferred from proxy data in Earth history scale with measurement timespan as an approximate power law across nearly six orders of magnitude (10^2 to >10^7 years). This scaling reveals how climate signals measured in the geological record alias transient variability, even during the most pronounced climatic perturbations of the Phanerozoic. Our findings indicate that the true attainable pace of climate change on timescales of greatest societal relevance is underestimated in geological archives.

Hmm, well, that’s all obvious yes? No, indeed not. Their conclusion (my bold) is clear enough, but not quite why it follows from their analysis. The conclusion, if correct, is relevant: if you ask any number of people, including me, exactly why 2 oC is dangerous when we’ve seen changes bigger than that in the past, I’d give you various answers but quite high up would be rate-of-change which – as the paper says – is believed to be significantly faster than the geological record (For example, the niche evolution of vertebrates, inferred from ancestor–descendant comparisons over millions of years, has been contrasted with projected rates of climate change in this century to conclude that the rate of warming exceeds the adaptive potential of animals by orders of magnitude. Our work indicates instead that geological episodes of climatic or evolutionary change likely fail to capture the true pace of changes on timescales of most relevance for understanding the impact of similar changes today.) The paper (as far as I can see) doesn’t actually say that isn’t true any more; but it does say the speed of past change has been underestimated. There’s some PR which helpfully reassures you the team emphasise that their research doesn’t negate present-day concerns over climate change, but rather highlights a gap in our understanding of ancient climate change. Or some different PR.

The challenge (because this is in bastard Nature, and therefore compressed as though paper were going out of fashion) is to follow their chain of logic. Happily, there’s a helpful picture: 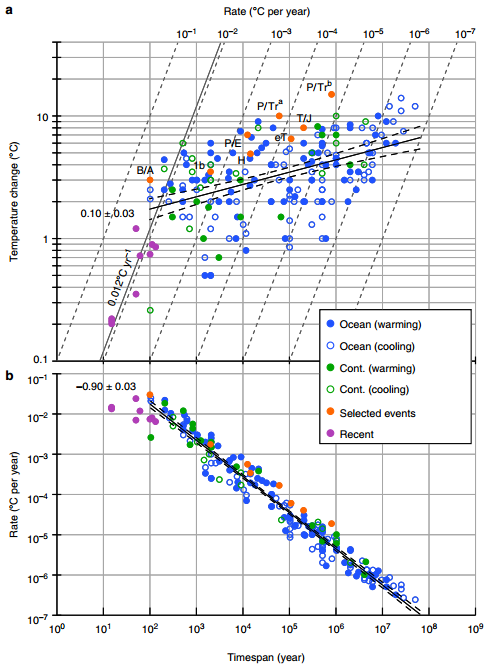 The scaling relationship predicts that for every 10-fold increase in measurement timespan, there is an approximately 8-fold decrease in the recorded rate of temperature change. The logical explanation for this scaling is that climate change does not proceed in a linear, monotonic manner, but is instead characterized by transient stasis and reversals, even during episodes of extreme warming. Similar explanations have been put forward for observed timespan-dependent scaling in other Earth system processes, notably sedimentation rates and evolution. Geological temperature changes defined at typically centennial to multimillennial timespans cannot capture the full
variance of the climate system operative at shorter timescales; aliasing variability that is readily apparent from higher resolution and more recent records.

So, I can kinda understand that: temperature change isn’t linear, as we observe, its fairly wiggly. Any time you dice up a long-term trend you’ll find shorter term trends, and the relationship indicates that the maximum of those short term trends will be larger than the long term trend. Put that way it almost sounds obvious. They then make some attempt at a crude correction for that in their figure 3: 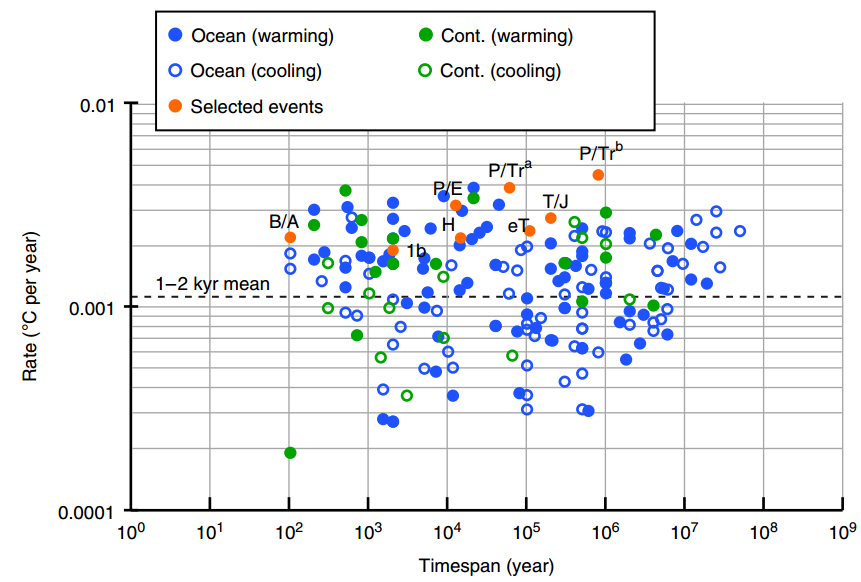 I’m not sure how valid that is, but let’s lay aside that concern for the moment and notice that present-day rates are ~0.02 oC/year, which is still about 10 times faster than the Bolling-Allerod, which is the fastest even-vaguely-recent event in their records.

Caution: more than usually, I’m uncertain exactly how to interpret this thing; if people point out my errors in the comments, I’ll correct it. Anyone called Dr A who happens to be in the Waterman on Tuesday is also welcome to knock some sense into me over a pint.

12 thoughts on “Rates of ancient climate change may be underestimated?”