The Economist, about Ted Cruz, in an article about his presidential hopes:

Conversely his appeal to moderates is limited. He has had little to say to or about the poor, beyond his perpetual gratitude that, when his father was washing dishes for 50 cents an hour, no one was sent by the government to help him. His flagship economic policy is a regressive flat-rate income tax of 10%. Black Americans, anyone concerned about climate change (which he denies) and non-Christians should look elsewhere. Ditto homosexuals: “This shall not stand,” Mr Cruz declares of gay marriage. That grandiloquent but fuzzy pledge exemplifies his gambit: making impossible vows to disoriented voters which are all, at bottom, a promise to reverse history and revive a fairy-tale idea of America.

(my bold). In the real world that’s uncontroversial. But I think it is a shift in language at the Economist; not long ago they would have phrased it rather more softly.

Oh, and speaking of presidential races: you USAnians really need to get yourselves some credible candidates. Sanders is a mess, Trump a joke, Cruz a disaster, Clinton I feel not the least enthusiasm for and she’d probably lose to Rubio. Perhaps he wouldn’t be a disaster? Speaking of which the Economist also says Ted Cruz may have won, but Marco Rubio came out on top. On GW, he appears to be a tosser (etc.), but that’s practically the entry requirement for Repubs nowadays (pace BB). In other ways he doesn’t appear to be a total disaster. 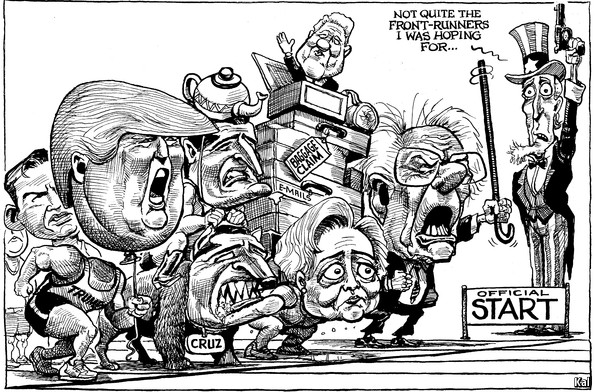 * CIP: Robo-Rubio
* Stoat watch: The tale of a stoat Otago Daily Times. Spoiler: does not end happily.
* Do You Believe in Magic? asks CIP.