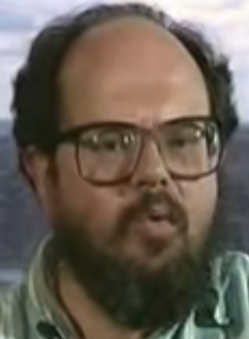 Just a quickie. In response to my last JM points me at The Greening of Planet Earth (1992), featuring luminaries such as Gerd-Rainer Weber of the German Coal Association (featured just in case you were under any illusion that it was only evil USAnian fossil fuel interests causing trouble; those nice sensible well-educated Krauts show similar) and our hero, Lindzen (looking egg-headed to an astonishing degree; but we’re interested in his words, not his looks).

As you’d expect, it is the usual mixture of lies, half-truth, some genuine truth and some things technically true but in practice misleading. The most obvious lie, which L tells with a perfectly straight face, starts at 13:06:

That was published in 1992 so probably made in 1991, presumably in reaction to IPCC ’90. Wiki provides us with a convenient quote from the SPM:

Our judgement is that: global mean surface air temperature has increased by 0.3 to 0.6 oC over the last 100 years…; The size of this warming is broadly consistent with predictions of climate models, but it is also of the same magnitude as natural climate variability. Thus the observed increase could be largely due to this natural variability; alternatively this variability and other human factors could have offset a still larger human-induced greenhouse warming. The unequivocal detection of the enhanced greenhouse effect is not likely for a decade or more.

So, indeed, that doesn’t say that warming has – in the technical sense – been detected. But nor does it say the opposite, which L asserts: that no-one believes the warming was human-caused. Since I was around then, I can remember quite clearly what people thought: that the warming was human caused. L, based on the video, was an outlier even then but not so much of an outlier that he didn’t talk to his colleagues: he knew very clearly that plenty of people believed it was human caused. Indeed, there is Hansen’s famous 1988 testimony to the House of Representatives. Could you perhaps argue that Hansen was “virtually no-one”? It doesn’t seem plausible. And anyway, he wasn’t alone. Indeed, the entire point of the bloody video Lindzen is in is to argue against people who did believe it was true; they wouldn’t have bothered produce the video if such views weren’t commonplace.

The rest of the words near there are of the same sort: taking anything inconvenient and not proved as false; and anything convenient and not disproved as true. And don’t miss the appearance of the old and well loved “vineyards in Britain” talking point.

16 thoughts on “More Lindzen, if you can bear it”