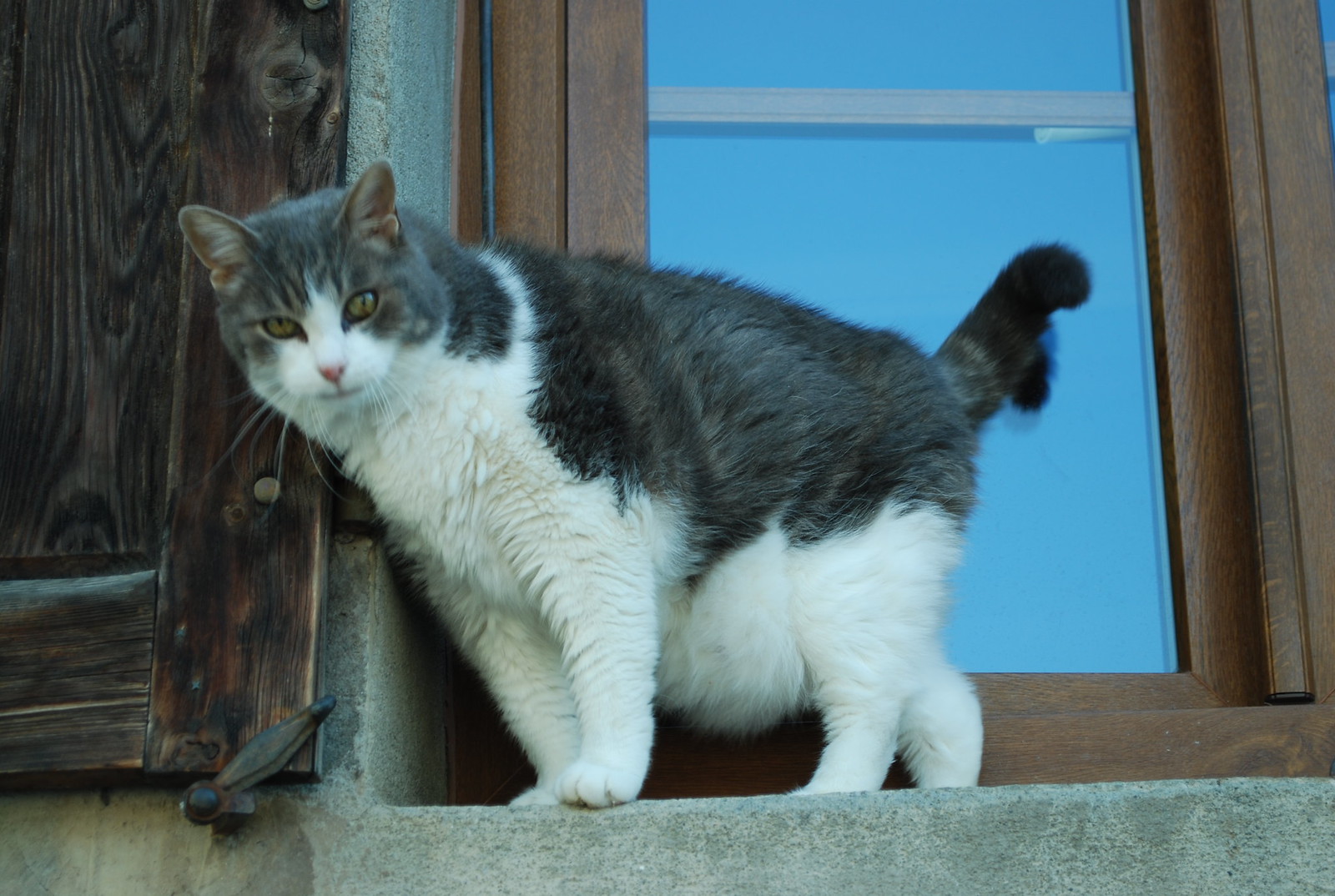 You’re wondering – I know you are – about the unexplored connection between Kant and Cats. And I need to begin by disappointing you: this is not one of his. This is nameless cat from Vallouise whose only sin was to stumble into my viewfinder. I should continue by saying that I’m going to parrot Popper, because I think Popper has it right; and has explained something I’ve wondered about for a bit, viz why anyone takes Kant seriously3.

Start, if you don’t mind, with the usually moderately reliable Wikipedia, and ponder their Kant’s antinomies page. It is, I hope you can agree, impossible to understand. WTF is Kant actually trying to prove with his “proofs” that contradict each other? In fact, there’s a hint there, which is readable if you already know the answer: He used them to describe the equally rational-but-contradictory results of applying the universe of pure thought to the categories or criteria, i.e. applying reason proper to the universe of sensible perception or experience (phenomena). Empirical reason cannot here play the role of establishing rational truths because it goes beyond possible experience and is applied to the sphere of that which transcends it. Well, it is a hint, but it is garbled and incomplete. Another somewhat garbled version I found on the wub is from Michael Allen Gillespie: On the face of it, these two assumptions seem to contradict one another. Kant, however, attempts to show that this contradiction only arises when reason transgresses its own limits and seeks to grasp the infinite. Reason thereby becomes dialectical and is lost in a realm of illusion where it is misguided by imagination and rhetoric. The solution to this problem, in Kant’s view, is a critique of reason that makes its limits clear. This is the goal of The Critique of Pure Reason. On the basis of this critique, Kant believes it will be possible to distinguish the legitimate philosophical use of reason from its dialectical or rhetorical use, and thus to guarantee the rational foundations of science while leaving room for morality and religion. Which is roughly right; though it is odd that MAG, presumably a scholar, doesn’t credit Popper with having already said it. 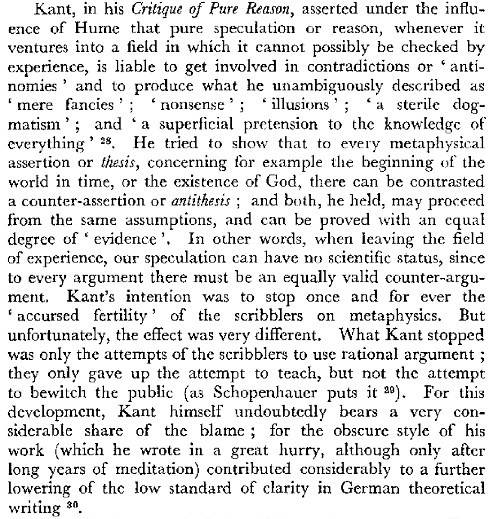 This actually makes sense; if it wasn’t what Kant actually intended to say, I’m sure it’s what he would have intended, had he thought of it. It chimes very nicely with Hobbes’s hatred of the “Schoolmen” and Popper’s own views; and, I think, with mine. And with a view of science as theory grounded in experiment. Just to be clear, since I’ve included a non-searchable image, the argument here is that pushing abstract reasonning too hard without any attempt to check it via experiment – or into domains where it cannot be checked – will inevitably lead to a large pile of words with no real meaning.

[Late update: I think I should add that I am suspicious that Popper is merely fathering his own ideas on Kant. If true, that wouldn’t make the ideas wrong, it would merely weaken Kant’s reputation. Furthering this suspicion is Kant’s “Matter is infinity divisible” statement / “proof”.] 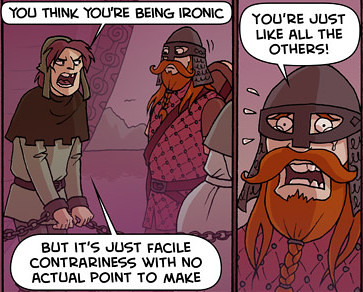 1. The Open Society and its enemies, volume 2, Hegel and Marx2, chapter 12 section II.

2. In which Our Hero defends TOS by attacking some of its enemies, namely Hegel and Marxism. Note that while he spares no sympathy on Hegel, his works, his influence and his followers, he has considerable sympathy for Marx if not for Marxism.

3. I know you’re not interested, but I am: having stumbled across Kant’s Antinomies many years ago – perhaps 20 – I wondered why anyone took this stuff seriously, and just wrote him off as yet another incomprehensible and pointless German Philosophe4. Popper, however, treats him seriously and contrasts him favourably with Hegel; indeed, along with Schopenhauer he is brought in to bolster Popper’s fight against Hegel.