Actually, its just another pile of links thinly disguised.

We thought that mandating python-style indents with pre-processing back into C might be nice. Alternatively some scheme whereby indent levels reflect coder status, so you can see immeadiately what not to fiddle with. And of course, what font should the code be in?

Watching the Deniers says There will be no US Congressional investigation into “Climategate”: or how global warming sceptics got duped. And may be correct. Even the wackos aren’t really wacko enough to take on the science, it seems: the froth is just for the voters, who are easily fooled.

At last, Tamino confesses all: yes, Phil Jones was wrong. Hopefully that will make the septics happy. Actually that looks possibly publishable. It does however raise the issue of how your dof should be adjusted when you remove “noise”. I’ve asked there, belatedly.

If you don’t erg, Cracknell versus Pinsent will mean little. What I like is the way you can’t tell who has won, afterwards.

Tim Worstall channelling Harry Hutton is worth a larf.

I don’t really do bio-diversity here, other than being generally in favour of it and recognising its loss as being one of the important but hard-to-quantify costs of GW. But Eli makes an effort.

James in ungrateful but can you blame him?

ps: Joke, from the letters page of the Economist: Three religions are asked, “when does life begin?”. At conception replies the Catholic priest. At birth, says the Calvinist parson. When the children grow up and leave home, says the rabbi (that one is for Kevin).

pps: even though I’m late to the party, because it looks like being popular, Getting things right (from RC, about the silly NGO that managed to convince itself of 2.4 oC warming by 2020; see-also Bart’s take)

Time for a few linky type things. The first couple point to the New Blog in case you’ve missed it.

* Snowy again by me, about the recent weather.
* Christmas Head
* xkcd Christmas Tree (thanks Mayank) and on wikileaks 🙂
* Lamest edit wars on wikipedia. The Bot wars section is good. Of course, wikipedia is soft nowadays, with the block-fingers too poised. We had real edit wars in the old days.
* Beautiful supernova fragments via Bad Astronomy. As a species we are frequently rubbish but occaisionally sublime.
* J+J go to AGU but don’t find much except Macs. A nice dig at Curry’s incoherence, but the apparent lack of much new confirms my vague impressions from the outside.
* Infinite Growth and the Crisis Cocktail – Guest Posting looks to me like a fine example of wishful and woolly thinking. I left some questions; it will be interesting to see the answers.
* [Late in] Why Velikovsky was right by Tim Ball – ht to the Baron. You just couldn’t make this stuff up.

I liked it, anyway, enough to clean it up. Perhaps better in context: Echo Park Time Travel Mart (via TS’s feed). And the Victorian iPods are good, too.

Via CIP, who feels for the suffering rich, a good piece from Krugman (which is itself really from Brad DeLong) Rat Race America. On why those who are really quite comfortably off no longer feel as comfortable as they would have 30 years ago.

Godel in Engine Summer?. You decide. But if you haven’t read it, you should. And The Deep. And Beasts. But don’t read Little, Big. Or at least, not all of it.

If we had to sum up the political view of our participants in a single sentence… we couldn’t. That’s sort of the point.

Rumours of an explanation of a bit of the 70’s cooling.
Nature’s take, and the thing itself.

Monckton on God. Monckton has already had far far more publicity than he deserves. But it is convenient to keep a link to everyone pointing out how wrong he is. More.

I think I need to pad out the text a bit here in order to make the images line up nicely. Um, what shall I say? It is raining. We’ve hoovered the living room. Errm, there must be more to life than that. I know: I’ll point out, unoriginally I’m sure, that the sea ice is definitely off its min, and definnitely “only” #3 in the records. As to what the september min will come in at, we’ll see in a little while.

Pix from China (h/t mt): boston.com/bigpicture/. mt chose the dam; I prefer this one. This is the scary one.

Miscellany: digital sundial. Who would have thought it? Oh, and the spectrum of mercury through a CD. And a nice pic to demonstrate that PZ isn’t all bad by any means. 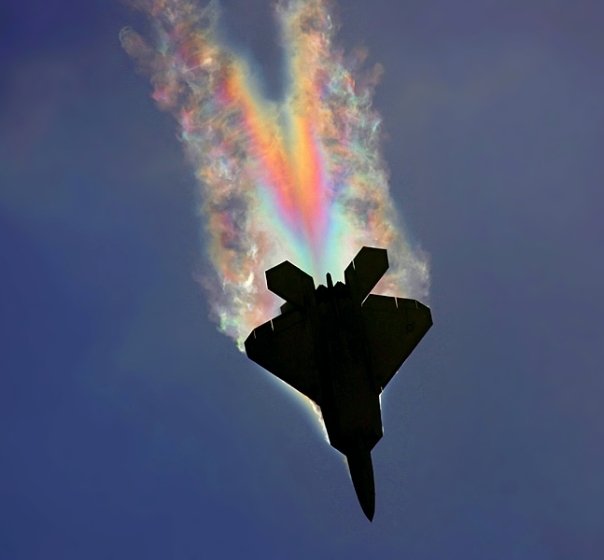 The latest crop of links-n-stuff. First up is this superb photo – ht TS’s google reader feed. It won second prize but for my money is far and away better than any of the others (higher-res version – thanks BD). Its tagged as a “condensation rainbow” but it isn’t, I think (wrong shape). It is probably diffraction not refraction – see [[Iridescent cloud]]. Tom said I saw this elsewhere (can’t remember where) and I think the explanation given was that the plane was making a sharp turn and adiabatic expansion resulting low pressure one side of the wing lowered the temperature enough for an ice(?) cloud to form. It seemed a reasonable explanation so I’ll go with that. The same photographer, Bernardo Malfitano, has another good one at here.

[2019 update: gosh, it’s still a gorgeous picture. And I still think it isn’t a rainbow, but my reasons have shifted. I think the not-a-circle-arc is bogus, the region is too small to show that. But, the sun is behind the plane (no?) and rainbows form away from the sun so I still think it’s probably diffraction.]

Meanwhile, on the perennial issue of the costs of GW: A new mechanism to consider when measuring climate impacts on economies.

On the very very silly end of GW, on wiki we’ve been having a Big Argument about [[Climate change alarmism]]. What became really weird was me having to explain (see here) that yes indeed my own paper really wasn’t a good source for what the septics were trying to push (here). This appears to have been so extreme that it has even got through to at least some parts of arbcomm.

[Update: but I forgot to link the the far more amusing spoof PD.]

And for all you physicists out there, an old favourite I ran across again recently How to do physics.

Melting Rate of Icecaps in Greenland and Western Antarctica Lower Than Expected says ScienceDaily but its wrong: what it means is, less than previously measured. The GRACE folk have recalibrated their isostatic rebound, it seems.

Heiaheia is yet another track-your-fitness website that AN inveigled me onto, but it is cute and funky and brightly coloured. Hopefully they’ll integrate it to garmin connect sometime.

Down at the scummy end: In particular, any “predictions” and “projections” about the future must be entirely based on observations. A must-read. As are the latest episodes of Harry Potter and the methods of rationality (up to 46 at last count).

Local news: I’ve just done my first erg for ages (7606) and Phoebe is a fleabag.

Finally, and belatedly, the LOLcat bible: Nebuchadnezzar sed: “ALL YOUR BASE ARE BELONG TO US”

Special bonus pic at the end (saintgasoline via 4chan):

[Update. Oh, and I forgot the ridiculous kerfuffle about Hawking’s latest. See Penrose in the FT (the after-coffee anecdote makes Penrose sound like a twat, which for all I know he may be, but the rest is OK) or Woit rip Hawking to shreds. Just because you’re in a wheelchair doesn’t make you right.

More late stuff: Science scorned says Nuture (Volume: 467 ,Page: 133 Date published: (09 September 2010)): There is a growing anti-science streak on the American right that could have tangible societal and political impacts on many fronts… Denialism over global warming has become a scientific cause cÃ©lÃ¨bre within the movement. (ht: Romm).
]

Its friday, time for some lighter stuff.

* Cameron (not, not the Borkeback one) won’t debate Morano, and Morano is happy to crow. All good knockabout fun, and Cameron ends up looking like a fool, but who cares? He is a film director.

* RC notes this appalling error by the Black Helicopter Gang: “I wonder if you’ve seen this terrible description of the greenhouse effect on a UNFCCC background page? http://unfccc.int/essential_background/feeling_the_heat/items/2903.php
It actually says that incoming solar energy is ‘reflected’ by the planet’s surface ‘in the form of a calmer, more slow-moving type of energy called infrared radiation. … Infrared radiation is carried slowly aloft by air currents, and its eventual escape into space is delayed by greenhouse gases'”

* Were you wondering if Energy and Environment was a high-quality journal or not? You could always Ask Curry

* And now for something completely different: a useful link: Eric Wolff on ice cores.

* An idea for dealing with silly comments. I may well do this next for the next gem that comes in.

* I was a bit ratty about surfacetemperatures.org when it first came out. But it seems to have got better since – there are now some white papers and a moderated blog (Zomg! Censorship! Ah shaddap). Anyway, Steve Easterbrook writes Data Challenges in Creating a new Surface Temperature Record about them, so this is my chance to give them a few more eyeballs.

* A lovely picture, coutesy of MONGO. Its a thunderstorm anvil, not a nuclear explostion, in case you’re wondering.

* In memory of Carlos the Jackal

* Oh, and did I link to Eduardo ripping up McShane and Wyner before?

“The more I get into this, the more I find two classes of doom-sayers, with, of course, the silent majority in between,” he wrote. “One group says we will turn into snow-tripping mastodons because of the atmospheric dust and the other says we will have to grow gills to survive the increased ocean level due to the temperature rise.” – Hubert Heffner, deputy director of the administration’s Office of Science and Technology under Nixon, 1970.

And while I’m on rubbish journo’s (are there any other sort? Yes of course: JF!): as I said before, Monbiot is rubbish. Here he presents his snivelling excuses for hainvg called for Jones to resign. And they really are snivelling: So was I wrong to call, soon after this story broke, for Jones’s resignation? I think, on balance, that I was. He said some very stupid things. At times he squelched the scientific principles of transparency and openness. He might have broken the law. But he was also provoked beyond endurance. I think, in the light of everything I’ve now seen and read, that if I were to write that article again I’d conclude that Phil Jones should hang on – but only just. So, having fallen for the septic junk and done his own little bit towards poisoning the debate, Monbiot can’t even bring himself to apologise. What a skunk.

[Update: JA has done this soooo much better than me 🙂.]

The Krypton Cataclysm: Why So Few Survivors? asks mt.

Thought: just as nothing Buddy Holly did was as good as American Pie, so none of the old 40’s movies are as good as The Friends of Mr Cairo.