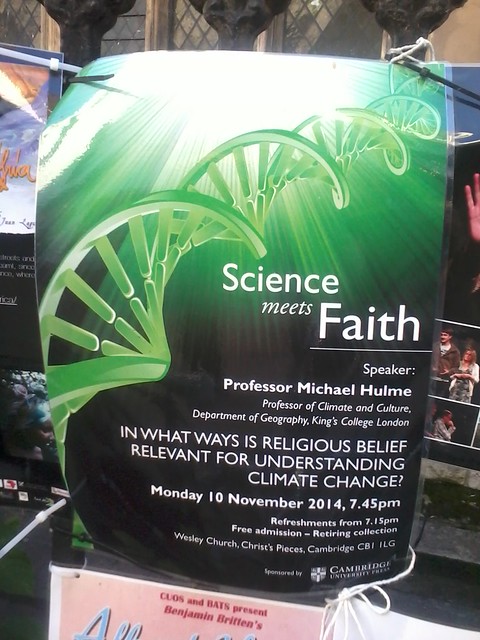 For some time I’ve been concious of how lucky I am to live in Cambridge with its wealth of cultural opportunities, and dissatisfied with my own poor response: so often, its easier to follow routine. So last saturday, in the market square, amongst the poster for “Spem in Alium” and others I found this. And thought: I happen to be free on Monday. So along I went. Its one of a series, BTW, should you happen to be in Cambridge on the second Monday of the month.

I know I’ve read some of Mike Hulme’s stuff before, and not really liked it, but couldn’t remember exactly what. So that didn’t much affect my reactions to his talk. Looking now with the all-seeing eye I find this, from 2009 wherein I analayse two of MH’s texts, from whence I abstract the relatively polite this is excellent. How can one man write this, and then the tosh of the Beeb piece? Weird. That still largely fits.

Meta: audience, about 40, mostly older than me. In the lovely Wesley church on Christ’s Pieces (don’t you just love Cambridge names?). He’s a good speaker, careful and deliberate; unhurried. Perhaps 45 mins of talk and half an hour of questions. This post is written from the notes I wrote on a paper napkin; they kindly provide decent pre-talk food and tea. Hulme, perhaps unsurprisingly, turns out to be Christian. This isn’t entirely obvious straight away; he’s fairly careful to speak in terms of “faith communities” and such like terms that avoid expressions of belief; and most of what he said could have been said by an atheist professor of sociology. But not all of it. At one point he explicitly said his viewpoint was Christian, and one of the questioners was gauche enough to ask him directly if he was; he seemed somewhat taken aback to be asked so directly, but did manage a direct “yes” in reply. In the following, my interpolations are in []’s. Things in quotes are nearly-direct quotations from MH but I don’t claim to be word-perfect; my napkin was quite small. In a couple of places my notes are so incomplete as to be confusing; I’ve done my best.

There was no science in what he said. And not much religion. It was essentially sociology, and politics.

Intro: the IPCC barely mentions religion. Naomi Klein, ditto [in retrospect, it seems weird to implicitly equate the two in this way.] Why not? Fear of divisiveness? But religion provides no magic solutions. For example, from Christianity, compare the Operation Noah with the cornwallalliance.org [typically, he provided no judgement between these two viewpoints. Later on he provided more examples, which would lead you to believe that “pro climate change”, so to speak, was the popular or perhaps overwhelming viewpoint of religions.]

Somehow, he leaps to “religion is inescapably important”. Religions are relevant because:
– they influence believers cosmology
– they can mobilise their followers
– they have resources
– networks.

Slide (re: cosmologies): C. S. Lewis: the discarded image. Which I’ve not seen; it may well have been worth going to the lecture just to have that drawn to my attention.

Slides: the cute one of the guy sticking his head out (from here), and an IPCC-a-like flow diagram of the carbon cycle. Voiceover: the IPCC assumes a mechanistic world view with no place for religion. It does not recognise different cosmologies, e.g. Maori. But these have great power [we’re now heading towards Beyond the Hoax territory]. Slide: Domain of the Gods: an editorial essay, Simon D. Donner.

Quotes misc people (Marshall Islanders, Bishops) talking nonsense about climate change, but takes them seriously: ” a set of accounts being offered”. [For which I think I’d refer you back to my fulminations in this post: exactly how we expect the public to evaluate / believe the scientific research on GW is an interesting question]. “We have to understand climate change through this kind of analysis”.

Then, he actually speaks approvingly of Eco-Republic:What the Ancients Can Teach Us about Ethics, Virtue, and Sustainable Living by Melissa Lane: Eco-Republic draws on ancient Greek thought–and Plato’s Republic in particular–to put forward a new vision of citizenship…. Fuck me, has he never read The Open Society and Its Enemies? Come to that, has he never read The Republic? Has Melissa Lane? What kind of Green Fascist fuckwittery is this?

Calm down William. Deep breaths. Keep going. I didn’t, of course, have the full horror of Lane’s book available to me during the lecture.

Virtues traditions, barriers to religions being of use [I may be slightly muddled here, my notes are unclear]:
– eschatology [that handles the Southern Baptists, I guess]
– competing issues, e.g. the poor
– inadequate social critique
– conviction or motivation to act – value / action gap, aka Sin.

At the end, he put up a slide with misc books on, and a link to mikehulme.org. That includes a link to Five Lessons of Climate Change: a personal statement. That statement is somewhat typical of the style of talk and answers he gave today; not to my taste.

My own summing up of what he said: a lot of people profess religious faith, they amount to a powerful political grouping, and so shouldn’t be ignored. Implicitly (when he talked of different cosmologies) he asked for “the message” to be tailored to this grouping, and since he said this in the context of the IPCC he was, somewhat less implicitly, asking for the IPCC to “speak their message” in a framing that the religious would be comfortable with. I think this is bollocks.

There was a longish Q+A session afterwards, which I noted too:

Q1: the IPCC is a (fake) religion, sucking people in, leading people away from the core Christian duty of professing the gospels.
A: but the duty of ?explaining? climate change is entirely compatible with he gospels.

Q2: somewhat incoherent as a question – something like, there are lots of different religious groups, that don’t always know what the othwrs are doing. The questionner mentioned Earth Bible and I’ve guessed the correct link.
A: [this was the only Q to which I thought he managed a useful and illuminating answer] Indeed, religious groups are diverse and have diverse readings, in contrast to the IPCC, which pushes a “universal” science [he almost sounded disappointed by this].

Q3: IPCC / Klein are trying to achieve authority / status, but religion is diverse, so is it fair to criticse them for excluding religion?
A: can understand that thinking, but IPCC is trying to bring in the best sociology knowledge, yet ignores religion [this seems a weird perspective to me, who concentrates on the WG I stuff, which of course ignores sociology. If you’re off in the ghettoes of WG II or III, though, this might make sense.] NK is more polemical [oh good, he can tell the difference, when he tries.] But she ends by decrying the lack of a mass movement, so why not include religion?

Q4: Lovelock says, more Nukes. Do you agree?
A: yes, I agree he says that [you’re a pol!] Wurble. Don’t really want to go there.People will be influenced by their paradigms.

Q5: Christian?
A: yes.
Q5a: does it bother you to be flying, despoiling the sky?
A: no problem with being a mobile academic.

Q6: as a species, we’re good at solving problems. Why haven’t we solved this one?
A: we’re doing lots of research. But its not just tech, also attitudes / pol / social.

Q7: lots of conviction (on the issue of climate change being a problem) but not much energy on actually solving it. Why?
A: wurble.

Q8: Geoengineering?
A: Not a good idea, see my book.

Q9: can you say more about faith… do people need faith that climate change will happen [unless we do something about it]?
A: many of my colleagues would say its a matter of evidence, not belief. But he says there are issues of belief, and trustowrthiness [this could have segued into an interesting discussion of exactly or roughly how the public, or non-experts, or even experts, some to accept-aka-believe the evidence, but didn’t.]

A retiring collection. I gave them £5. Their egg sandwiches were good. You, by contrast, get this glorious picture free of charge, merely for having the patience to read to the end of my post. 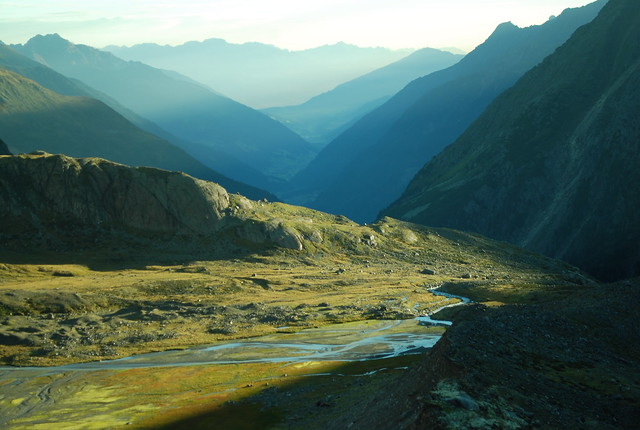 [Update. Thinking about this, there’s a possible bias in his thinking which I wish I thought of at the tie, and tried to ask him. Its this:

If you’re a Christian – in any sense that matters – then your faith is important to you. And you want that faith to affect your worldview. And hence, you want that faith to affect important issues of the day – war, peace, GW. But if you’re at all honest and a scientist, you’re also perfectly aware that your faith doesn’t affect the science at all – which is perhaps why MH steered so clear of it. But your faith can affect the interpretation and the communication – these are vague areas up for grabs by anyone.

Doesn’t your need to make your faith relevant and important in your life bias your view of how the science should be communicated?]

* I’m Afraid This Changes Nothing – mt on Klein’s latest.

22 thoughts on “Hulme: In what ways is religious belief relevant for understanding climate change?”