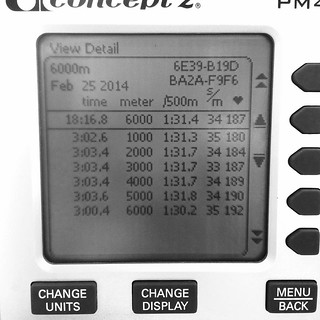 Mostly misc. I start with this erg screenshot, which I hasten to add is not mine, though that will be obvious to the cognoscenti immeadiately, or indeed to anyone who has sweated out 2k and got not even close to 6:06.8 – I can’t even quite manage 7:10 for 2k, let alone for three times as long. This one is by Eric Murray, and not only should you be admiring the raw score, you should also admire the amazing consistency.

Following the aquatic theme is Bantam IV by some narrow-boating friends.

This page is intentionally left blank – a philosophical study.

Remember the Italian seismologists? They seem to have been cleared.

The Unpleasant Profession of Jonathan Hoag: Heinlein, before he got silly. For some reason I was reminded of that recently.

Now for the silly stuff. I just discovered a fun trick to play: this is a screen shot of WUWT: look, they really are wingnuts! 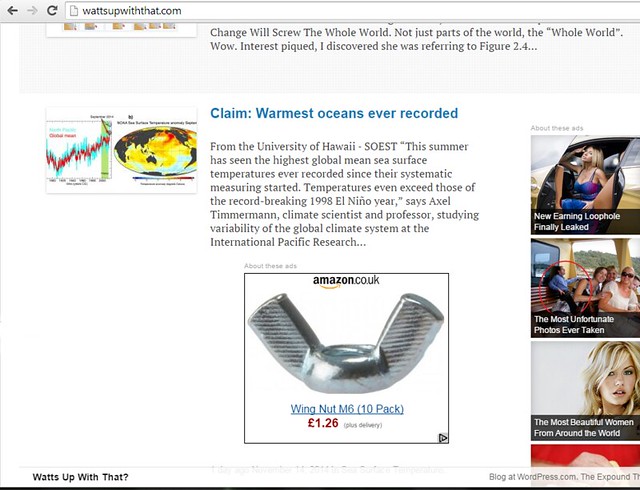 I was looking for a lead-in to the utterly stupid, yet at the same time utterly banal, WUWT piece Cloud Feedback by Stan Robertson. Its completely broken, for reasons explained by Richard Telford (and which are even confessed in the comments of the WUWT piece; this one is so obviously broken even the Watties noticed) but its still, shamelessly, sitting at WUWT without any form of correction or notice that its wrong. Perhaps they’re taking lessons from Breitbart, or maybe its the other way round.

And lastly for my titular piece, something completely batshit: yes, its the Looney Lord again. Whining, yet again, about his arch-nemesis, Michael Mann. Its full of the fake legalese that we’ve come to know and love from the Good Lord, but cast that to one side and read

That Dr Mann’s own curriculum vitae lists him as having co-authored and thus, in accordance with academic norms, as having accepted full personal responsibility for the depiction on the front cover of the WMO’s publication with which in his brief to the court he denies all connection.

Ring any bells? Of course! Lord M’s own little bit of denialism: apparently, when Monckers publishes something with his name on it, he accepts no responsibility for the contents. Oh, its glorious.

Oh, and finally: if you’re thinking of getting killed by IS / ISIS / ISIL / whatever we’re calling them this week: do make sure you’re western. You’ll want your name in the papers, after all, not to just be one of a bunch of anonymous Syrians.