Just as I wrote down my thoughts pre-vote, and advised against leaving, I’ll write down my thoughts a day or so after, for posterity. Doubtless it will be grateful. First off I like my son am already bored with the Diana-esque levels of news clogging that the vote has caused, so I apologise for adding to it. Feel free to comment at ATTP or Sou if you like. Or here. 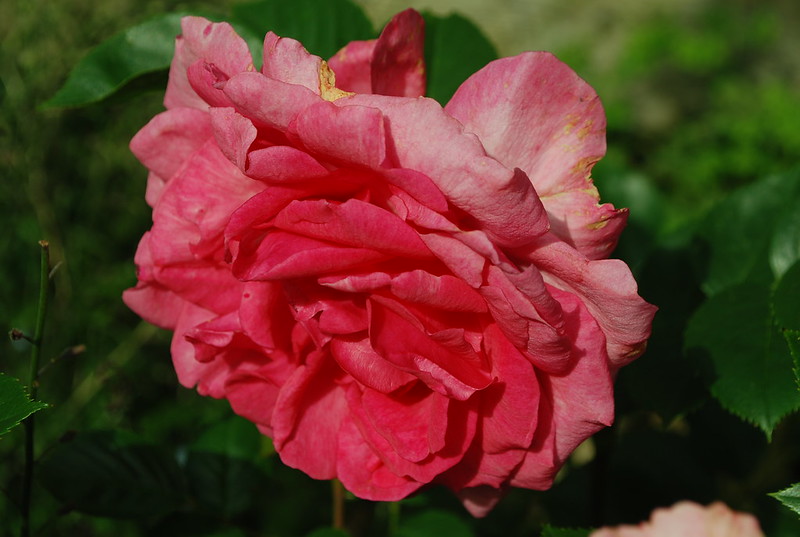 But before all that, a picture of a rose, otherwise everything would be somewhat depressing. Fittingly, it is slightly downcast and perhaps past its finest bloom. But it’s a brand-new forward looking Perse rose.

Anyway, just as the pre-vote news was full of drivel, so is the post-vote ([Update: an example courtesy of Timmy). Despite the dire warnings of financial disaster, and the apparently-huge falls on the day, that’s mostly froth. The rate fell steeply on the Friday from 1.31 to 1.23, but over a 5-year period that’s unexciting. Only a rather longer time will tell. With a bit of luck house prices might fall but I’m not counting on that either. On the Moody’s downgrade, I’m with Timmy. [Update: I should have thought more carefully before I graphed. Pound-vs-Euro is interesting, but of course the vote affected the Euro too. So pound-vs-dollar would have been better. For that, meh. We dropped from ~1.45 to 1.35, which isn’t chicken feed, but its unlarge in comparison to longer term trends.]

More interestingly, I was proved a better seer than NB, in that I correctly predicted that if he lost, Cameron would resign and leave his successor to sort out the mess steer the ship of state to the exit. I think cameron was correct to do that. There’s a slight downside2, in that it adds some uncertainty at a time we could do without same (or not. We do at least have certainty he will resign, and that he’ll stay till October, which tides us over for the next few months. Had he not resigned there would certainly have been months of speculation about whether he would or not or be forced out or not). Having argued strongly for Remain, he could hardly lead the negotiations of Leave. On a personal level I’m sure he’s heartily sick of the whole thing. There’s also the upside that this plausibly delays our formal invocation of article 50 until the next PM is chosen, probably in October, and who knows we may have seen sense by then. For my foreign readers – and, it seems, for the benefit of some EU leaders – I should point out that the next PM will be chosen by Tory MPs, not by the country [Update: sigh, would you believe it, I got that half wrong. What actually happens is that Tory MPs select two candidates, which are then voted on by the party membership.]. And that the referendum was advisory, and doesn’t of itself invoke article 50; indeed the exact mechanism by

which we do that is unclear: most likely, a vote in the House of Commons, probably after the new PM is chosen (I [Cameron] think it’s right that this new prime minister takes the decision about when to trigger Article 50 and start the formal and legal process of leaving the EU). The upside of that delay is that just possibly we might see sense and change our minds; though I’m doubtful about that. For example, a majority of MPs could choose to vote against the article 50 bill; but it’s unlikely. There’s a petition with (at present) 1.5 M signatures to retrospectively change the rules and require a 60% threshold on a 75% turnout – very unlikely to be enacted – but the Beeb article on that does contain the intriguing However, there is talk around Westminster – in the wake of a plunging currency and falling share prices – of whether any deal on Brexit negotiated with the EU should then put to a referendum further down the line. That could just be a way out, but only if a large number of people end up agreeing that Brexit is a clear mistake.

While we’re on “timing” I’ll notice that several EU leaders have said oh get on with it then, leave quickly if you’re going” (h/t Timmy) but as Timmy points out, that’s not something they are in charge of, at least not formally; we get to decide when to put our notice in. Perhaps that gives us some leverage in the negotiations? But perhaps not much. 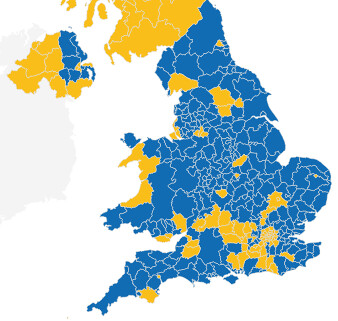 The In vs Out map is striking (I’ve cropped Scotland since it was all In). Apart from London, the Home Counties, Cambridge and Shire, Oxford, Norwich, the Welsh Foreshore and some misc other places, its a sea of Out. Which reflects I think the division between Us and Them. The most common theme of “them” I’ve seen on the news is that it’s those who’ve done badly over the last few decades who voted Out, apparently under the impression that Out, being a change, would be better. It might be; but I’m dubious it will be, for them. If there’s an economic downturn they’re the most likely to get shafted. The other theme was “them” sticking one to the “metropolitan elite” but the same comment applies.

Scotland looks entirely likely to have a second referendum on independence. Without thinking it out too carefully I think – assuming we don’t reconsider our exit – that they’re likely to have it, and to vote to Leave the UK and Remain in the EU, and the EU will be happy to keep them. Oh what a tangle that will create. Leave itself will create a considerable legal tangle. That has a benefit – it will tie up a lot of idiots who might otherwise go around creating new laws – but a cost: we’ll have to pay all their salaries, and they will inevitably get many things wrong, and the courts will be snarled up with cases of whose law applies to what. I’m not sure how big all these frictional costs are. [Update: Timmy points out that Scotland would have problems meeting the entry criteria without sever austerity; not sure how they’d get round that, but people can be creative.] 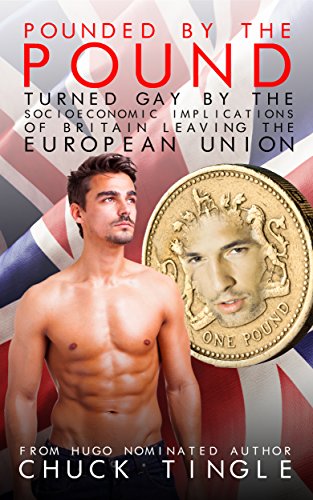 One thing curiously unremarked, to me, is the way misc EU folk have said “well, if you’re going to leave, we’re certainly going to give you bad terms to try to discourage everyone else” (e.g. Wolfgang Schäuble1; with Angela Merkel a notable exception). That very strongly puts forward the view that the only reason countries would stay, is because they’ll stomp on your faces if you leave. In other words, its close to an admission that they too think the EU is a bad thing. I would far rather see them confident; have them say “of course we’ll do our best to negotiate fair terms for all that will make both sides as prosperous as possible”; making the point that people stay in the EU because they want to be in. There’s no sane economic reason for the EU to put up trade barriers with the UK (errm, or with anyone else in fact; as various but to me most obviously Timmy have pointed out, the correct action is to reduce all import tariffs to zero immeadiately without negotiation. But Merchantilists Rool, no matter how stupid that is).

Update: via CIP I realise I’ve forgotten to note how disappointing it is that the EU appear to have learnt nothing from this. Almost everyone I know that wanted Remain – which is to say, nearly everyone I know – says “Remain, even though the EU has many unattractive features”. And yet our Leave seems to stir nothing in them but to make the exit as painful as possible – see previous paragraph. That’s their only solution.

I leave you with more roses. 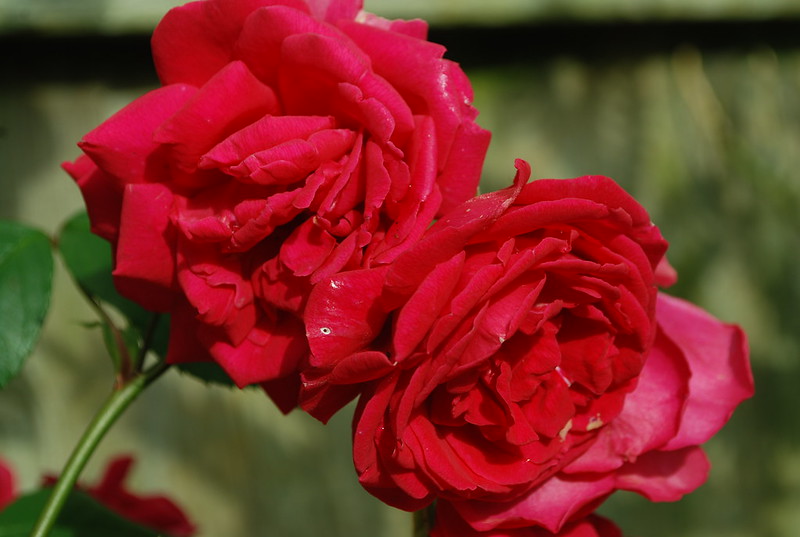 * Researchers reeling as UK votes to leave EU – Future of science uncertain after referendum result. Nature. But then again, “This is going to be very damaging,” says Jonathan Butterworth, a physicist at University College London who works on the ATLAS experiment at the Large Hadron Collider near Geneva, Switzerland is a hint at how it might get solved.
* Brexit: Emotions Trumped Facts During UK’s Referendum – Real Skeptic.
* Oh my! Looks like Scotland and Northern Ireland may have a veto on #Brexit process – Twitter
* Boris explained
* wittily, we’re due the presidency in 2017
* Brian largely agrees with me which is nice, because he is sensible.
* JA sounds genuinely angry, and he’s normally so detatched.
* Churchill on Europe
* James on the already-visible impacts on science collaboration.

1. See VV’s comment. I am no longer sure I can find a good source for anyone actually saying this, as opposed to one of their opponents saying that they’ve said it.

2. Actually there turned out to be a major downside, in that we got that useless twat May as PM. But I couldn’t have been expected to predict that.