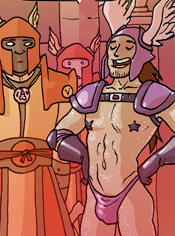 Browsing Twitter after a break I was unsurprised to see the usual suspects dissing that fine chap, Peter Wadhams. Heaven forfend that I should ever stoop so low. It is tempting to describe the “lame article” they were dissing as the usual stuff, but alas it isn’t. It lards extra Yellow Peril guff onto the pre-existing guff. Incidentally the author, Paul Brown, was once a respectable chap – my great-aunt Proctor knew him somewhat. But that was many years ago. Bizarrely, the first “related posts” link in the article is to a far better article by Ed Hawkins pointing out how bad the previous article about Wadhams was.

[You may be wondering “why the image?” At least, if you’re new here you might. The answer is that web-indexers tend to throw up the first image on a page that they find; and I didn’t want that nice PH to be the “image” for this post.]

“What is needed is something that has not been invented yet − a way of stopping elderly scientists from talking nonsense” (I may have fabricated part of that quote). And my section header is a sub-headline in the article, to they can hardly complain if I reproduce it to my own ends. The rest of this post is just character assassination (or, to dignify it somewhat, trying to work out what his current status is); look away if you like Wadhams.

I was intrigued by the article calling him “former head of the Polar Ocean Physics Group at the University of Cambridge” (my bold). It appears to be wrong; as far as I can tell, he is still head of this little known group. The article may have got confused by him also being (accurately) the former head of SPRI. But the POPG is an odd little thing. Just look at it’s web page: Professor Peter Wadhams has run the Group since January 1976, which until December 2002 was based in the Scott Polar Research Institute (SPRI), University of Cambridge. In January 2003 the Group moved within the university from SPRI to the Department of Applied Mathematics and Theoretical Physics. It was previously called the Sea Ice and Polar Oceanography Group. Text by Prof Peter Wadhams, 2002. Updated by Oliver Merrington, POPG Webmaster, October 2005. This is certainly not an active web page. [I’ve just re-read that. He’s run the group for forty years!?! Can that be healthy?]

Poking further, I find his Clare Hall bio, where he self-describes as “became Emeritus Professor in October 2015” (and there’s also this little letter which may or may not be deliberately public). So his DAMPT page is clearly out of date (it still describes him as “Professor”, which he is isn’t, any more that Murry Salby is2). I think the best explanation is that the DAMPT pages are just out of date and unloved; they don’t give the impression of vibrancy.

Within DAMPT, the POPG is a touch anomalous, to my eye. It fits within the highly-respected Geophysics group, and might be compared (in the sense that it appears to sit on the same organisational level as), say, to the Atmosphere-Ocean Dynamics Group. This is a highly active research group featuring hard man1 (just look at those eyes; you wouldn’t want to run across him on a dark river) Peter Haynes (who, I might perhaps hasten to add, has nothing at all to do with the story (story? This post has a plot? Well no. OK then, ramble) I’m telling) and mysterious old wizard Michael McIntyre (famous for telling you to repeat words). Compare that to the POPG page and it looks a touch moribund; poke further into the list of projects and the impression re-surfaces. Can an active research group be lead by an emeritus professor? It seems odd to me, but what do I know?

There’s also this bio which, perhaps fittingly, ends on the ludicrous Vast costs of Arctic change.

1. Whillans was well regarded for his capacity to deliver a cracking one-liner off the cuff. One example which encapsulates his wry humour concerns him encountering a team of—to his mind—poorly equipped Japanese mountaineers attempting the north face of the Eiger. “You going up?” Whillans asked them. “Yes! Yes!” came the reply. Pause, then Whillans: “You may be going a lot higher than you think.”

2. Update: that’s unfair to Wadhams; emeritus is a decent status, far better than “former” which is all Salby has left. I should have compared him to Lindzen instead, perhaps.