Having got to the Mullerhutte I finally had a chance to climb the Zuckerhutl, which at 3505 m is the high point of the Stubai and something I’ve wanted to climb for ages. My diary reminds me it was a cold night: the hut is quite high at 3145 m, and I was alone in my dortoir, and used two blankets. There were a few other people in the hut: two Germans, who I’d half-met on the Signalgipfel, and another group of four; not sure where they went. Naturally, being a reserved Englishman, I merely nodded politely at them.

Happily, as you saw from the last pix on that post, the weather was glorious going into sunset, which implied that the rather dubious weather we’d been having was finally due to turn. Mmm, yes: 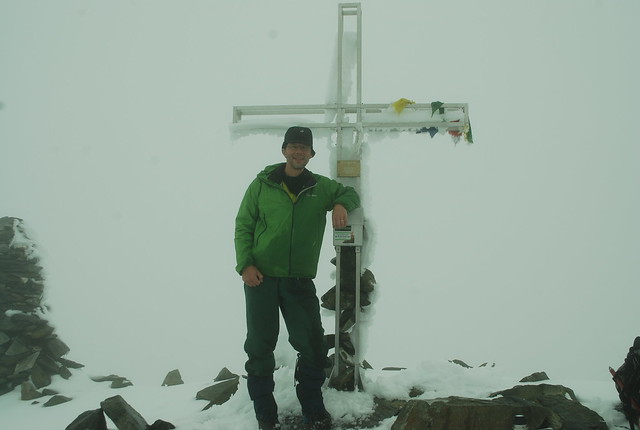 That’s me on top of the Wilder Pfaff (its taken by one of Anna or Tobias, who I met “properly” on the summit). Since we were in 100% cloud, with additional light rain to dissuade me getting the camera out, I didn’t bother take any pix of the route up. So here (from “tomorrow”, taken from about the Mullerhutte) is the Wilder Pfaff (3458 m, R, the apparent high point on the skyline, and apparently-lower-but-actually-higher just peeking out from the L is the Zuckerhutl). Its not as pretty a pic as the one I used in my last post but its more informative as to the route: 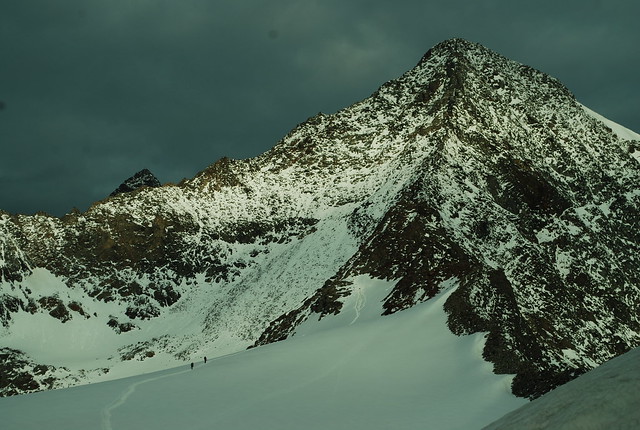 I found this view quite intimidating, which is part of the interest: trying to guess the route from looking at it – not that I could do that this morning, since viz was 25 m at best; on the glacier, I could see nothing except the tracks, which I naturally followed, taking care to follow the right branches and not head off to the Becherhaus. After a while rocks appeared out of the cloud, and the odd cairn and paint blob, but the marking is thin. It starts to be a bit scary, with a sheer drop off to the R. To the L is snow / rock, initially easy but steepening higher. The ridge is generally narrow, with the odd awkward step or pull, and (only one?) cabled section. Easier with better viz, I’d imagine. 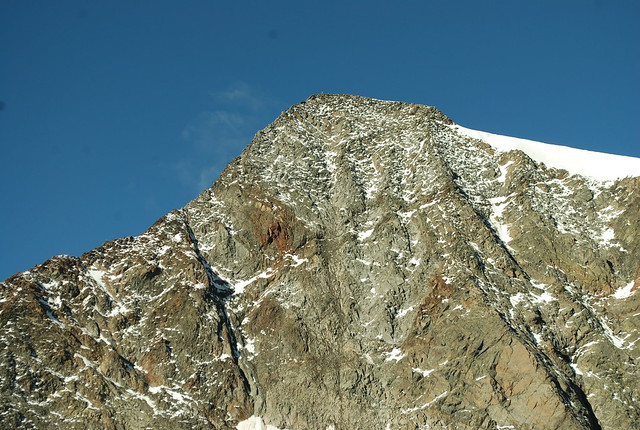 This is the view from the East, taken from about the start of the Lubeckerweg ridge, on the 8th of September. Look closely and you can see the summit cross. Here is a zoomed-out view from the same viewpoint. And here’s another, from the summit of the Wilder Freiger, on the same day.

As I said, the weather was grey so whilst I’d got up at 6:30 I didn’t trouble myself to leave until 8; A+T had left somewhat earlier. I’d climbed fairly quickly so met them just as they were getting to the summit; photos and sign the summit book all round. Oh, and here’s the GPS track (something weird happens in the middle, the GPS gets the descent from the WP but totally fails to register the height gain up the Z. Odd).

What to do now? Sit down for a little rest of course, and ponder the (unknown) route to the Zuckerhutl. Decide to go for it; the route down to the Pfaffensattel is easy, and I’ll take it from there. Or we will, since we’ll go together.

Take care not to follow the branch of tracks that leads to the Hildesheimer hutte (I’ve not been there); faintly to the left is the edge / cornice which we don’t approach too closely, and then there’s a short climb up snow with the Zuckerhutl presumed to loom above. In better wx I’d consider the north face but as it is I’m happy to follow tracks. A party of three comes steaming back down the track – two young clients and a guide – and the guide shouts something in German that I’m informed is “you should be roped up if you’re on a glacier”. Meh. We start up the rock. Soon we come to a point where it gets interesting, sufficiently so that A+T aren’t happy to proceed unroped – there’s enough snow that the holds are covered, but not enough for the crampons to grip reliably, and sometimes you get that nice effect when the first time you try it, its all fine because there’s enough snow, but the second time you’ve knocked the snow off and your crampons screeek across rock. I’m moderately happy to bumble on up and treat it as nice mixed ground, so after improvising a harness out of a sling (they have all the proper kit, I of course have none) I take the rope up. It turns out the difficult section is quite short and we de-rope after 25 m and thenceforth continue scrambling; other groups however stay roped. The top comes earlier than expected, but not earlier than I should have expected, since the saddle is at 3344 m. The wx is still rubbish: 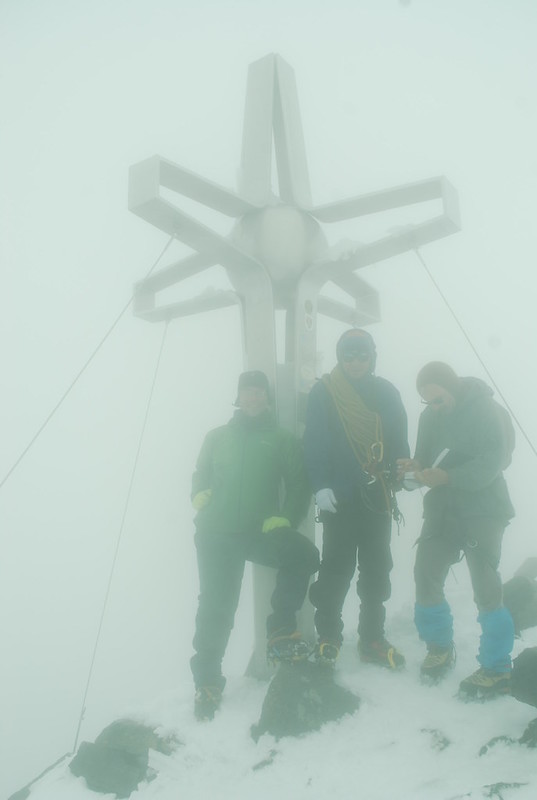 I’m the one on the left. The guy on the right is composing a Norse epic in the summit book. Its moderately windy on the top which is annoying mostly because its blowing water droplets onto my glasses and I can’t keep them clear; that doesn’t improve the viz. Its also getting to that point that whilst I’m not cold now I can feel I will be in a bit, so we don’t stay long. The descent is a bit yukky but OK; we don’t rope up because we find the right route :-). The route wasn’t obviously marked – but might have been under the snow – but there were occaisional “running belay” gear, which I’ve not seen elsewhere – kinda G-shaped metal hoops that you could fairly safely put the rope into and trust it not to come out, but you could do this quickly. We have to wait for 5+ mins for one of the roped parties to clear, which finally does make me cold. Then we get to tramp back up the WP and descend its ridge, which is also yukky-but-OK.

And so back to the hut. I do consider rushing back down to the Nurnberger and its hot showers, but sanity prevails and I don’t. Later on the weather clears a little, but too late. A+T join me for the evening meal, which is again good. Here’s the hut interior main room from breakfast the next morning. 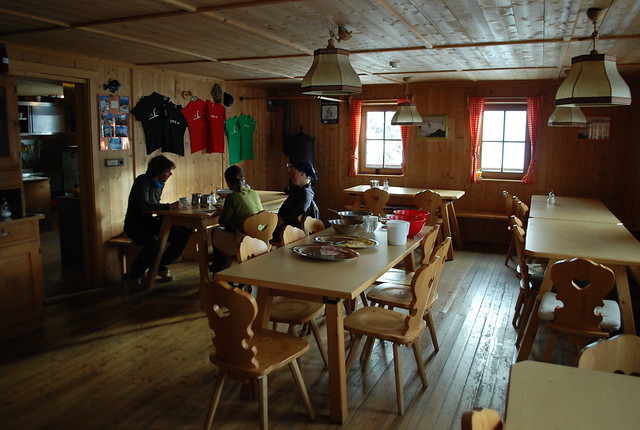 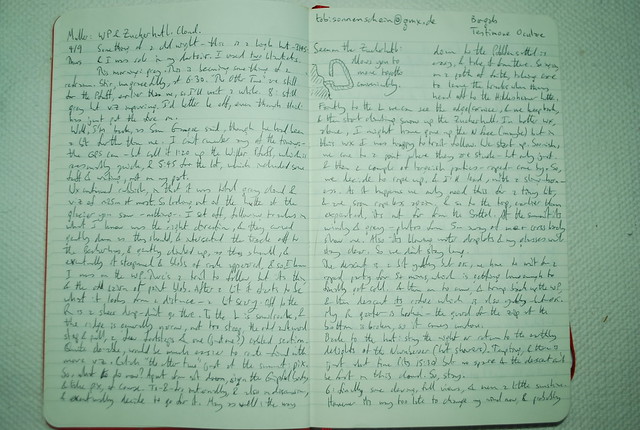 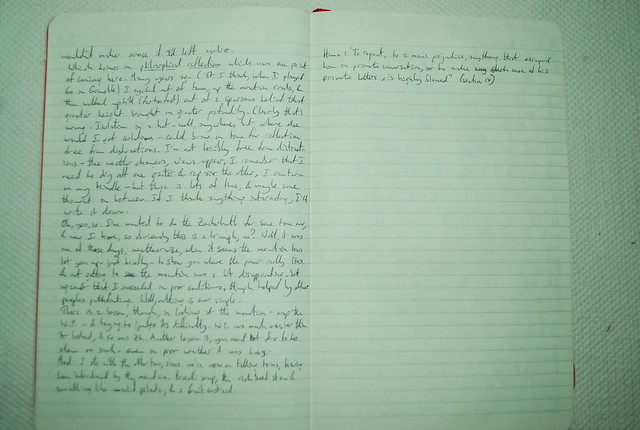 8 thoughts on “Wilder Pfaff and Zuckerhutl”