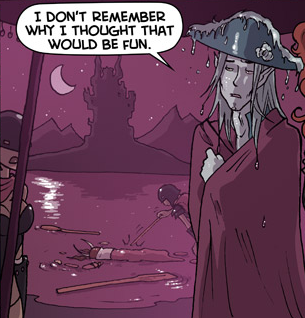 Hard on the heels of Wegman’s farcical attempt to sue Mashey comes Watts’s incompetent attempt to meat-puppet wiki. If you want to see my comments at WUWT that didn’t survive moderation, you’ll need to read stoat spam or just imagine them; I said nothing that wasn’t obvious. My favourite, I think, was

The context here is wiki; we’re speaking about updating a wiki article, so you need to follow its rules, or just mumble over your beer. Wiki’s rules for reliable sources are WP:RS, which is to say https://en.wikipedia.org/wiki/Wikipedia:Identifying reliable sources. I don’t actually agree with all that but meh; they’re the rules.

which got snipped as a “policy violation”; I kid you not. Anyway, the backstory:

Well indeed, is what? Wiki was having some trouble deciding, as chronicled by me a month or more back. Currently its fairly stable on the delicious

Willard Anthony Watts (born 1958) is a former broadcast meteorologist from the USA,[3] president of IntelliWeather Inc,[4] and founder of the Surface Stations project, a volunteer initiative to document the siting and maintenance of U.S. weather stations.[5] He operates Watts Up With That?, a weather and climate change[6][7] blog that focuses on the global warming controversy and his opinion that the human role in global warming is insignificant. It is described by climatologist Michael E. Mann in The Hockey Stick and the Climate Wars as having “overtaken Climate Audit as the leading climate change denial blog“.[5]

(my bold). I’m sure the piece in bold is balm to his troubled soul. That its Mann being cited can only make the balm even more balmy; about the only thing the Watties hate more than being called denialists, is Mann. Naturally, the Mann article doesn’t quote Watts, because there is no symmetry: Mann is a respected and significant scientist; Watts is some blogger. But enough of that, because the focus for today is on the WUWT article. But before we get to that…

AW asserts that Of course, I’m not allowed to make any changes myself, because the Wikipedia rules prevent such things due to potential “bias”. Its not quite true, though squinted at from his distance its arguably true enough not to matter. The actual, complex, rules are at WP:COI if you want to read then. As with everything, though, its less the rules than how you act. And what they certainly don’t do is ban you from going to the talk page and arguing for your preferred version of the article; what stops AW doing that is Fear of leaving his walled garden; the outside world is a scary place.

My advice, though, to anyone with a wiki page about themselves is to not read it. And I take my own advice, to the extent that I don’t know if I still do have a page about me.

AW was somewhat coy about exactly what he thought was wrong with the article; a clear intent to apply a smear was about all. But a nod is as good as a wink to a meatpuppet, no?

The article is currently fully protected, and like the AW article is in a state that will doubtless delight the Watties:

Watts Up With That? (or WUWT) is a blog dedicated to climate change skepticism or denial[a] created in 2006 by Anthony Watts.[1][2]… Contributors include Christopher Monckton and Fred Singer as guest authors.[4]… and is among the most influential climate change denial blogs on the Internet.[6]

Which, errm, bears an eerie similarity to the version before all the fuss.

After AW’s clarion call, a couple of the troops turned up to fight the good fight. Oefinell kinda qualified the denial a bit (I bet he got spanked by AW in private for that thin effort) and Ponysboy changed “denial” into “skepticism”. That lasted about three minutes before being reverted. Then some anon made a more full-hearted try which lasted almost two minutes. But wiki has seen this kind of stuff before(if 4chan can’t take wiki down, the Watties don’t stand a chance); there’s even a banner for it:

Short Brigade Harvester Boris has a more amusing version, which I encourage you to read.

And there’s a procedure for it: “semi protection“, which prevents edits by anon, or new, accounts; and allows editing by established accounts. The threshold for an established account is low; its a few days of editing, not a year; its just enough to bounce off the noobs who’ve been sent in to wage holy war.

FWIW, the admin that semi’d it added a note to say that they were possibly too involved to take admin action on the article; but the action was so obviously sensible no-one complained.

Rather more recently that has been upped to full protection (no-one except admins can edit it, and they aren’t allowed to make controversial changes). That’s supposed to allow debate to take place on the talk page and some kind of consensus to emerge.

Will it? Certainly, the two ends of the spectrum will never agree. mostly, its just endless rehashing of the familiar “denialism! Its like holocaust denialism! ZOMG I’m just so offended I could use lots of exclamation marks!!!” versus “denialism is just a word that describes what you’re doing”. Guess which side I’m on.

As noted by me about a month ago, surfacestations.org appears to be a stiff. And, as far as I can tell, no-one gives a toss. I tried tweaking them in the comments, but no reaction; I even called AW’s duff paper a “poor dead stillborn thing” and even that didn’t get a rise. He really must have despaired of it. The wiki article says ”Watts’s Surface Stations project, an analysis of terrestrial US weather stations, was often discussed on WUWT, but became dormant in 2012” which seems fair enough. I did ”ask” at WUWT if they thought there was anything wrong with that; no-one replied.

Its scary out in the real world

My favourite exchange in the WUWT comments was this:

But you can (or at least you could, if you were brave enough to venture out of the walled garden)! Because the wiki page has a talk page, designed exactly for this kind of information exchange. Look, its here:

But actually, its even better than that, because the wiki page has a history tab (are you sure you’re comfortable with high tech?):

And if you press that, you can fairly readily find:

and the author of that change has helpfully explained themselves:

“Undo, and restore significant sources removed yesterday, which have been supported by consensus.”

And then further explained themselves on the talk page:

Do you need to be spoon fed any more?

I’m happy to see you being spoon-fed here at WUWT. You might learn a lot, if you ever decide to open your mind.

(BTW, thanx for the links, but if I want to be spoon-fed mindless propaganda, there are far better sources than yours.)

So they really are afraid to venture out of their safe little zone.

Its often said (well, at least by people who need an excuse for not reading what is written when they don’t like it, but who of course use wiki for all practical purposes) that wiki is fine for non-controversial topics, but rubbish at controversy. But this is wrong; wiki is surprisingly, astonishingly, good at handling controversy. That doesn’t mean that it always deals fairly with individual editors cough but nonetheless the contents are almost invariably good. Not always, but arguably better than anywhere else.

A follow-on from that is the suggestion that it would be better for controversial topics to be split: into “pro” and “anti” pages, sometimes with the additional suggestion that “pro” people aren’t allowed to edit “anti” pages, and vice versa. this is explicitly forbidden by policy, and I think that is correct: if you want to read about global warming you want one article that is as far as possible balanced; you don’t want to read one article that says “its all a myth and a con and black helicopters” and another that says “zomg we’re all going to die” and average the two in your mind; that would be pointless.

* Septics and skeptics; denialists and contrarians – me, in 2004.
* Climate denial blog-owner Anthony Watts calls his troops to Wikipedia action – Sou.
* In the forest, stoats are scaredy cats-NZ Herald

17 thoughts on “…into the bucket of jellied eels”