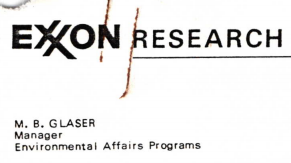 Eli is, in my view, rather over-excited by insideclimatenews’s Exxon’s Own Research Confirmed Fossil Fuels’ Role in Global Warming Decades Ago. The interesting question that remains is that since they did not disclose their knowledge to shareholders, will some lawyers get rich? is, I think, not an interesting question at all. The answer is No – at least, they won’t get rich by winning payouts against Exxon because of this. All this seems like a re-tread of the similarly unspectactular The Climate Deception Dossiers?

insideclimatenews breathlessly tells us that Top executives were warned of possible catastrophe from greenhouse effect, then led efforts to block solutions. The piece quotes stuff from internal company meetings “according to a written version [James F. Black] recorded later” but doesn’t, as far as I can see, tell me where this information comes from2. But it does point me at briefing material on the CO2 “Greenhouse” Effect so I’ll look at that.

This report isn’t a result of internal Exxon research; its essentially a survey of what was available at the time. They look at the Charney report, for example. Skimming, it looks to be what a careful unbiased researcher might well write. From1 the summary:

Then its worth quoting the rest of the summary exactly, so I’ll do screenshots. 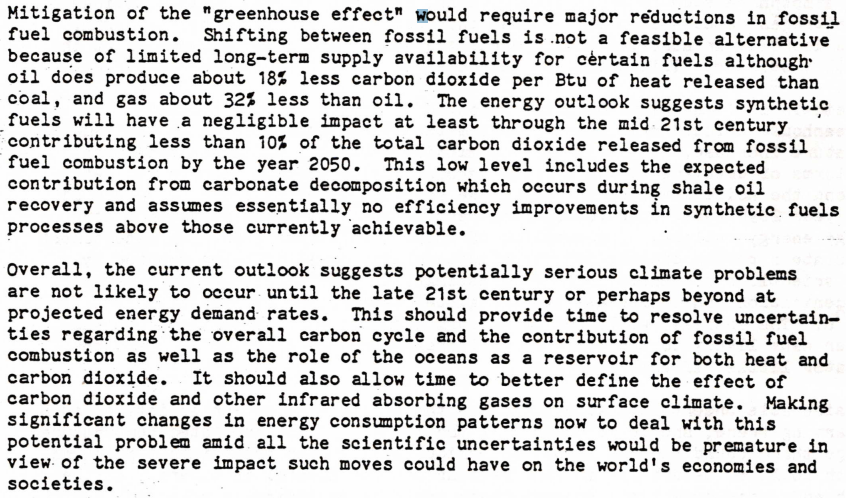 All of that seems pretty mainstream. None of it is secret, they haven’t come up with anything startling as a result of synthesising other people’s work. There’s no way you could sue them for failing to disclose any of it.

1. Cut-n-pasted from the online thing, which has auto-char-recognition on it, though it doesn’t work brilliantly. In particular, searching for phrases doesn’t really work. I’ve done some corrections where the meaning would be unclear (for example, “340 ppm” came out as “3q0 pp”).

2. Thanks to M, who points out that the sidebar does contain links:

I’ll update this when I’ve read them. There’s also a link to more documents including Presentation to NOAA (1979) – damn, those sneaky Exxon guys were hiding their stuff where no-one would ever find it!

* Rip her to shreds

33 thoughts on “What Exxon Knew and When?”